MONTGOMERY COUNTY, Ky. (WTVQ) – A Montgomery Couple pleaded not guilty Monday to animal cruelty charges but could face more trouble after a prosecutor said they were taking in more strays just weeks after almost 300 were removed from the property.

The couple — 60-year-old Renee Ann Zaharie and 65-year-old William Brian Zaharie, both of Highway 213 in Jeffersonville — were arraigned in Montgomery County District Court by Judge William Roberts during a brief hearing Monday morning. They are charged with second-degree animal cruelty after 104 dogs and 187 cats were removed from their property April 15 and April 16.

The charge is a class A misdemeanor punishable by 90 days to 12 months in jail and a fine of up to $500.

During Monday’s hearing, the county prosecutor asked Roberts to issue a court order barring the couple from taking in more animals at their property, where they operate ‘Caring for Treasured Strays,” because they apparently have taken in 30 more in the last month.

The judge said the prosecutor needs to file a motion to that effect and then the judge would rule.

MONTGOMERY COUNTY, Ky. (WTVQ) – An animal rescue group is asking for help after a massive roundup of animals found living in horrible condition.

According to the non-profit Guardians of Rescue, help is needed to get as many cats and dogs off a property as possible.

The group shared a post that said, in part, “Just when you think you’ve seen the worst, a case comes along that’s even more horrible.”

The group added, “Guardians, Kentucky State investigators and other agencies, and our placement partners are on the ground in Kentucky and a warrant has been executed on this big new case.”

The non-profit said an investigation is ongoing so it couldn’t share many details yet, but that the group would be working through the night.

According to Guardians of Rescue, donations are needed and can be made on the non-profit’s website HERE. You can donate via PayPal HERE.

ABC36 has reached out to the Montgomery County Sheriff’s Office for more information. This is a developing story. Check back with ABC36 for updates. 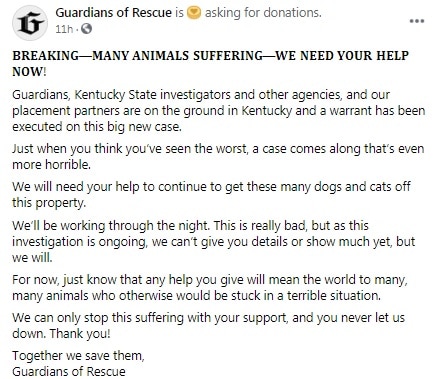