LEXINGTON, Ky. (UK Public Affairs) – Mass timber might be the wave of the future in the construction industry in this country. It’s already taking off in Canada and Europe.

Researchers at the University of Kentucky are collaborating in a project that will examine the resiliency and strength of cross-laminated hardwood panels made of wood species such as sweetgum, sycamore and red maple.

It’s strong, sustainable, more cost effective and energy efficient than building with steel or concrete. It is fire resistant, and it can act as a carbon containment system, whereas the production of steel or concrete releases carbon. Also, trees are a renewable resource, while sand and ore, the components of concrete and steel, are finite.

“Traditionally, in western civilization we used large chunks of woods, such as large beams, for building. But a more contemporary way of talking about mass timber is taking smaller pieces of wood and gluing those together to create beams or panels.

The advantage, besides the carbon footprint, is mass timber has fire resistance on par with concrete and steel structures. The outer layer chars, and that protects the rest,” said Bruce Swetnam, Kentuckiana Masonry Institute endowed professor and associate dean for students in the UK School of Architecture.

Chad Niman, forest products specialist with the UK College of Agriculture, Food and Environment, is teaming with Swetnam and Mariantonieta Gutierrez Soto in the Colleges of Design and Engineering, respectively, to test the viability of cross-laminated panels constructed from underutilized hardwood species in Kentucky’s woodlands.

The team is supported in their research through a UK Student Sustainability Challenge Grant. Through that grant, the team has been able to leverage partnerships with West Virginia University, Virginia Tech, Oregon State University and the University of Alabama.

A recent mass timber symposium they organized brought together 80 engineers, forest industry professionals, architects, economists, political leaders, landowners and entrepreneurs from around the Appalachian region and as far west as Oregon.

The participants discussed whether production and use of mass timber in Appalachia would be viable, examining the opportunities and challenges revolving around the introduction of that technology. The UK team is very interested in sustaining Kentucky’s woodlands while introducing new economic opportunities to the region. Niman, working in the Department of Forestry and Natural Resources, is laser-focused on developing healthier, sustainable forests. One way is to find a use for undervalued trees.

“A lot of folks think of sycamore, sweetgum and red maple as low-quality wood. We have a lot of these trees, and the types of uses they go into now are things like railroad ties from the sweetgum and barn siding and pallets from sycamore. Often, mature trees are left in the woods, which can hinder growth and competition of younger trees. We make fewer products with these species, even though they’re very strong, and they have a very nice appearance,” he said.

The idea is to use these underused species sustainably with forest management planning.

“We believe if we can target several of these underutilized species and try to provide better markets for them, then we can incentivize forest management a little bit more,” he said.

Currently the pulp and paper markets use these types of wood, but Niman said material used that way is converted into a short-term product, so it doesn’t have mass timber’s benefits.

“There’s the carbon storage aspect to it, where we try to find practical, large approaches that can reduce climate change or at least be able to reduce carbon that’s being emitted. That’s where construction has such a huge potential to store carbon while building the wooden structures we need for offices, education and housing. For those types of things that our society needs, we can use local resources,” he said. “The ultimate goal would be to have this be a material that could be produced locally.”

Niman oversaw the first stage of the research, the drying of the hardwood lumber at UK’s Wood Utilization Center at the Robinson Center for Appalachian Resource Sustainability. They dried the wood to a 12% moisture content, down from about 30% in its green state.

The kiln donated to the College of Agriculture, Food and Environment by C. F. Martin & Co. Inc. made that work possible. J&T Lumber, in Woodbine, donated the lumber for the project. After drying, the plies were glued together, with each ply’s grain running at a 90-degree angle from the plies above and below it.

“We have to make sure we’re testing in a way that they’re going to withstand a lifetime in use and not have delamination issues or other issues that people often worry about when they think about wood buildings. We’re going to evaluate as we’re doing some of this testing to see how well these will perform in these panels, to see if this could be a suitable market for those underutilized species.” 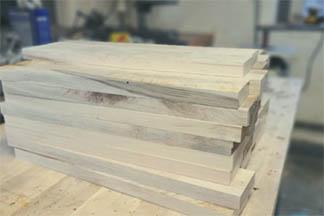 Sweetgum lumber that has been planed and cut in preparation for panel layout and gluing. Photo by Chad Niman

Gutierrez Soto, UK civil engineering assistant professor, and two doctoral students will test the mechanical properties of the finished cross-laminated panels, comparing it with other materials that are already accepted in the building industry. She is excited about doing the research.

“So far, the (mass timber) structures that have been tested in other parts of the world have shown a comparable performance to steel and concrete structures in some ways,” she said. “The idea of cross-laminated timber and other mass timber products is very popular in Europe and Canada, but the U.S. hasn’t really taken to it as much. There are some parts in the West and even New York, but not much in this area. I think that’s what we’re really excited about, bringing that opportunity to Kentucky and other parts of Appalachia.”

Through research into the stress properties of the panels, Gutierrez Soto hopes ultimately to get mass timber from hardwood species into the building code, so architects and structural engineers will have more confidence in the materials.

“We’re trying to move in that direction, and I think having this community of practice will definitely help us to have that conversation and move to our destination sooner than later,” she said.

In the School of Architecture, Assistant Professor Brent Sturlaugson and Joe Brewer, College of Design director of technology and facilities, are working with students this semester in a studio class looking at mass timber structures. The students’ final project will be to design a pavilion to house the campus’s new Lucas sawmill. Swetnam will lead a design-build studio in the fall, where students will construct the pavilion.

“I’m pretty pumped up about it,” Swetnam said. “It makes sense, certainly from an environmental standpoint. It’s not going to be cost-prohibitive, I don’t think, from what we’ve learned, and the aesthetic is good.”

Gutierrez Soto said the entire team is enthusiastic about the sustainability benefits that can be achieved from using locally produced mass timber in construction projects.

“I love the idea of preventing deforestation or monoculture and making sure that we preserve the biodiversity of the forest,” she said. “We’re not trying to create something that would wipe out our beautiful forests, but with proper management, would work with nature.”