MOREHEAD, Ky. (WTVQ) – A man passed out in a stolen car in a hotel 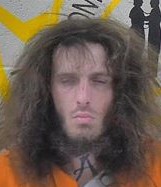 parking lot leads Morehead police to more than $3,000 in cash, drugs and a weapon.

According to a Morehead Police Facebook post, 31-year-old Cody Mudrinich was arrested on a variety of charges following the incident Wednesday night.

Officers responded to a call of a man passed out in his car in the parking lot at the Hampton Inn and when they arrived, they found Mudrinich behind the wheel of the car, which had been reported stolen in West Virginia, according to the Facebook post.

Officers located $3,654 in cash, meth, heroin, scales, pipes and other paraphernalia in the vehicle. They found more drugs, paraphernalia and a semi-automatic weapon in the hotel room where he was staying, police wrote.