LONDON, Ky. (WTVQ) – A man was charged in a drug case in two different counties on the same day, according to the Laurel County Sheriff’s Office.

Investigators say it began when deputies in Laurel County checked out a suspicious car in a business parking lot off the West Cumberland Gap Parkway, about ten miles south of London overnight on Tuesday.

They say the man in the car, 35-year old Steven Helwig, of Crystal Lake, Illinois, had suspected methamphetamine, a glass smoking pipe, marijuana and a large amount of cash.

Deputies say their investigation led them to a motel room in Williamsburg where, along with Williamsburg Police, executed a search warrant.

Investigators say they found methamphetamine and marijuana in the motel room associated with Helwig.

In Laurel County, Helwig was charged with possession of a controlled substance 1st degree, 1st offense-methamphetamine; possession of drug paraphernalia and possession of marijuana, according to deputies.

In Whitley County, he was charged with trafficking in a controlled substance 1st degree, 1st offense-methamphetamine and trafficking marijuana, according to Williamsburg Police.

Helwig was taken to the Whitley County Detention Center.

*Note:  The photos that accompany this story are courtesy of the Laurel County Sheriff’s Office. 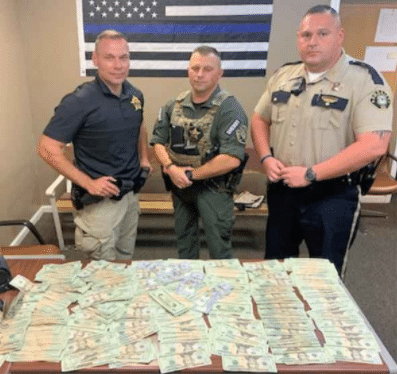