RUSSELL SPRINGS, Ky. (WTVQ) – A 29-year-old man faces charges stemming from at least two burglaries in Russell County and more than $6,000 in stolen merchandise has been recovered.

According to the Russell Springs Police Department, Zachariah T. Bunch, of Russell Springs, has been charged with felon in possession of a weapon, violation of a protection order, and theft and faces possible indictment in connection 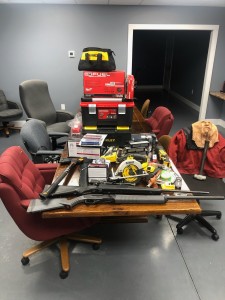 with the Ace Hardware and Highway 80 Power Equipment.

Sometime between 4 and 5 a.m. Sunday, Bunch is suspected of breaking the glass on the side door at the Ace Hardware on and stealing more than $4,900 worth of tools and equipment, including chain saws and other items. The store’s owner and police posted pictures on social media that resulted in tips that led investigators to a home on West Drive to check on a woman there who had a protection order in place, police said.

At the home, the woman who lived there allowed police in and Bunch, who was there, consented to search of a vehicle that matched one seen in video from the scene.

While doing a walk through of the residence, in plain view leaning against the wall was a shot gun that looked similar to one of the guns that had been stolen from Ace Hardware, police said. Likewise, also in plain view, was a Stihl brand chain saw that was found to be one of the saws that was stolen from Highway 80 Power Equipment. Together, investigators recovered $1,314.31 in tools stolen from the Highway 80 business.

Numerous items from Ace Hardware, including two long guns, several battery powered tools, knives and flashlights were recovered, totalling $4,964.57. Police say they also recovered a sweatshirt matching the clothing description of video footage from Ace Hardware. Upon search of the vehicle, the mask/neck gaiter and the mini sledge hammer that was used to break out the door glass at Ace Hardware were located, police said.