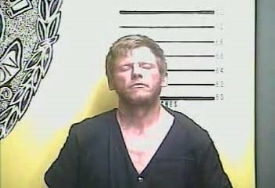 PINEVILLE, Ky. (WTVQ) – A Pineville man is held on a $5,000 cash bond after his arrest on drugs and weapons charges stemming from two different incidents.

According to Pineville Police, 33-year-old James Eric Brock was charged after officers say they found rugs and paraphernalia on him during a traffic stop. He was a passenger in a Toyota Corolla stopped for not having its licence plate properly illuminated.

He was charged with first offense trafficking in marijuana and meth.

Tuesday, Officer Shane Stewart added more charges stemming from a July 6 incident in which the officer tried to stop the 2005 Cadillac CTS Brick was driving but the uspect managed to escape on foot.’

Along the way, Brock dropped a backpack, which Stewart, with the help of Bell County Sheriff’s deputies Adam Southern and Jake Perry, recovered.

Tuesday, additional marijuana trafficking, paraphernalia, possession of a weapon by a felon, and other charges were filed.

Brock is held in the Bell County Detention Center on a $5,000 bond.