LAUREL COUNTY, Ky. (WTVQ)- A man is behind bars, accused of stealing a rescue squad Humvee and using it to visit his mom and do donuts in the parking lot of the motel she lives in.

The squad says its Humvee was parked near its building on Main Street, advertising its annual haunted house fundraiser, Terror Squad, when it was stolen Monday at 2 a.m.

The squad says its 1999 military Humvee is modified so it’s more ambulance than hummer. It doesn’t require keys; it takes a while to figure out, but you can turn them on using a series of switches.

Soon after the vehicle was stolen, London Police got a report it was driving at a high speed on North Highway 25. Later, someone reported seeing it on North Main Street at the Economy Inn, about a three minute drive away.

That’s where the rescue squad says Denney was caught on surveillance camera doing donuts in the parking lot.

The Humvee was eventually found in Rockcastle county just about 30 minutes away.

It was found about an hour after it was stolen.

The squad says it found beer cans inside and it’s more damaged than initially thought with doors ripped off. The squad says the doors are lightweight, almost like fabric. The back aluminum shell is also crushed in.

The squad says a mechanic will check to see if the Humvee is salvageable.

It says a constable found Denney walking on the side of the road after police confirmed with his mom he visited her in the Humvee.

The squad says the London Police Officer leading the investigation is a squad member so he was particularly passionate about finding the HUMVEE. 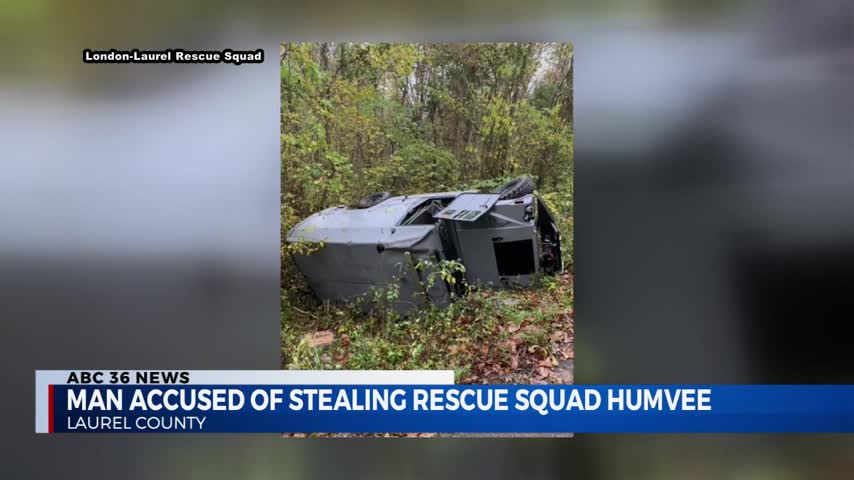