LAUREL COUNTY, Ky. (WTVQ)-A man is behind bars in Laurel County accused of assaulting his ex-wife then barricading himself inside a home.

Sheriff’s deputies say they arrested 28-year-old Casey Crawford of Corbin Tuesday around 2:36 p.m. at a home off Springfield Circle. Deputies went there for a welfare check regarding a domestic violence complaint.

Crawford is reportedly the ex-husband of the woman who lives at the home. She told deputies he held her against her will all of Monday, and she was only able to escape and call 911 for help Tuesday morning when she caught Crawford asleep. Deputies say she told them Crawford hit her with a closed fist in the face, ribs and back, and put a pillow over her face, all while kids were present.

When deputies arrived, they say no one answered and they found out Crawford was locked in a back bedroom and probably had access to a weapon inside.

The Sheriff’s Special Response Team responded and used a crisis negotiator, but Crawford reportedly still wouldn’t leave. The team entered the home; they say they found Crawford hiding in a bedroom closet under some clothes with a Glock model 17 pistol within reach. 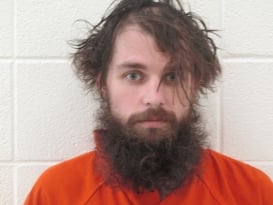