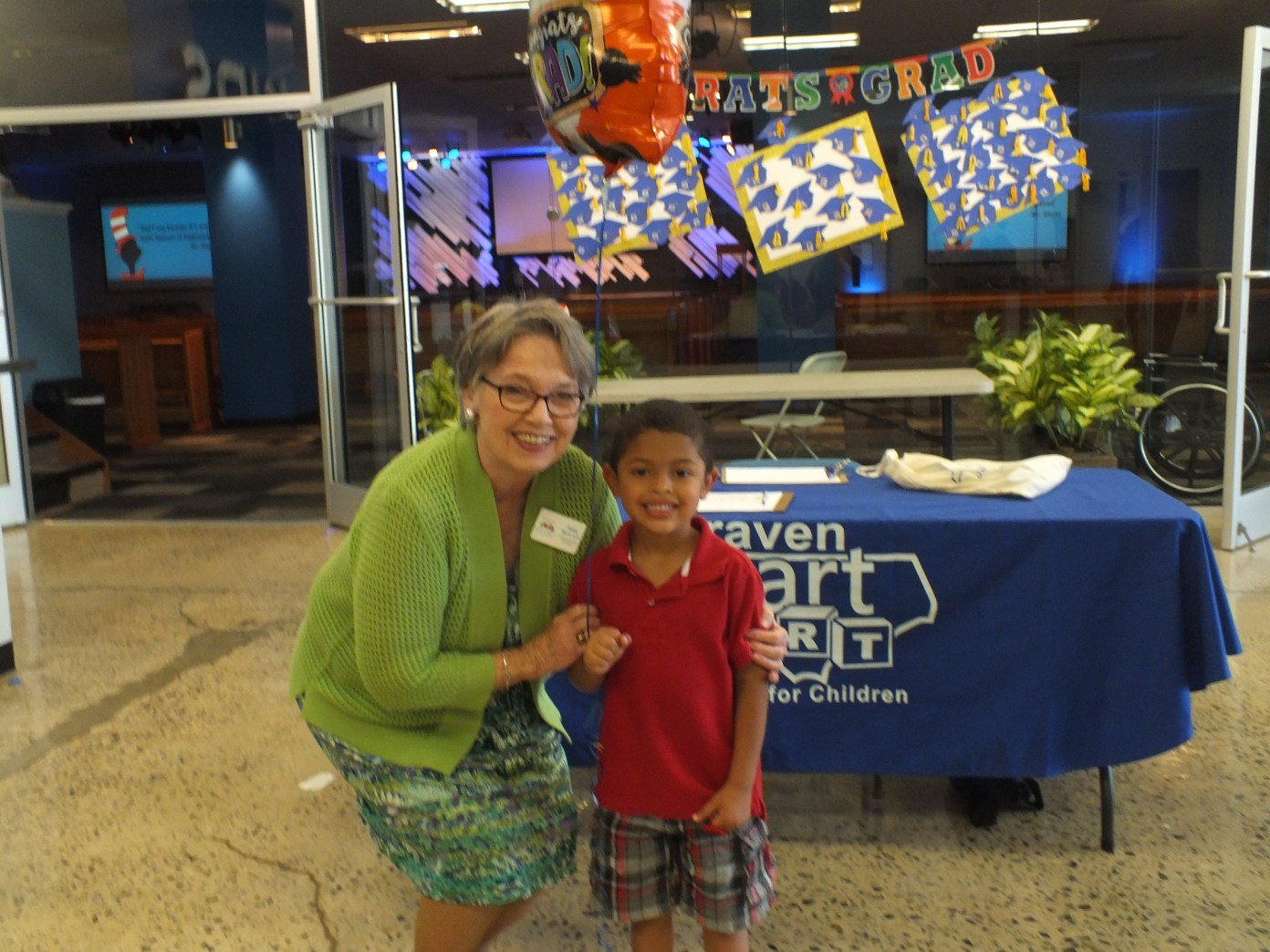 Pinkie Moore with a student at Craven Smart.

childhood education and at age 73, Pinkie Sparks Moore, who graduated from Morehead State University in 1969, continues to help give young people a better chance of becoming successful students.

Named after the title of a painting by Sir Thomas Lawrence, Pinkie Moore has spent the bulk of her career working in Craven County, North Carolina.

She retired as the daycare services coordinator for the Craven County Department of Social Services before continuing her career as the community outreach coordinator for Craven Smart Start Inc., a role she has held for more than 17 years.

Moore grew up on a small tobacco farm in Robertson County, which she said was one of the smallest populated counties in the state at the time. She entered first grade in a one-room school for three years until she transferred to finish out her remaining schooling at Deming High School, a high school that also included students in grades 1-8.

Neither of her parents attended college but they still made educating their children a priority.

“Although the family budget was limited, they splurged to buy a set of encyclopedias before they bought a television,” Moore said.

Moore, the oldest of three children, and her two younger siblings would all earn bachelor’s and master’s degrees (her youngest brother, Tom Sparks (75), earned a Bachelor of Science from MSU).

She first learned about MSU from her school’s librarian, Lucille Sandifer, who encouraged her to participate in the Regional Speech Festival for area high schools held on campus. Her high school principal, Herman Hale, referred her to MSU as a high-achieving student and indicated she needed financial assistance.

Moore attended MSU on an academic scholarship and her time at MSU included many defining moments that greatly influenced her life’s direction.

She was a work-study with Alumni Affairs, was a tutor counselor with Upward Bound for two summers and worked as a graduate assistant under sociology professor Dr. Richard Reser.

She was also selected for the Society of Cwens (now Lambda Sigma National Honor Society) and Cardinal Key.

Moore also joined Kappa Delta Pi sorority and the Political Science Club, where she served as secretary. She also met and married her husband of 52 years, Lee, who was a residence hall director of Wilson Hall for two years and went on to serve in the U.S. Air Force.

Moore’s experience in Upward Bound helped to steer her toward a career in social work.

She also credits then-MSU First Lady Mignon Doran’s Personal Development Institute in helping her “refine my social skills and manners” and giving her more confidence in business and social settings.

“I greatly admired Dr. and Mrs. Doran for the way they welcomed MSU students to the university and made us feel like ‘one big family,’” Moore said. “I was never able to have a job when I was in high school with only one vehicle in the home, so I found the experience of working in an office at MSU a great learning experience, as I have always worked in an office throughout my 49-year career.”

On the way to graduating with a Bachelor of Arts in Education in 1969, she completed student-teaching at Rowan County Senior High School and began preparing herself to be a high school studies teacher or a guidance counselor.

When she returned to MSU to earn a Master of Arts in Education in 1970, she said enrolling in the course Human Growth and Development changed her entire outlook and direction.

“By this time, I had been married for several years and was expecting my first child. Perhaps it was my maternal instinct kicking in, but this class was instrumental in steering me to the field of early childhood development,” she said.

While Craven County, North Carolina, has a much larger population than the one she grew up in, she said her experience growing up in a rural area instilled in her principles she applies to children in families from rural and urban areas.

“From my experience of growing up in rural Robertson County in the 50s and 60s, I always felt there was a great deal of community support for families and looking out for each other. I think that children who live in rural areas and come from homes where there is limited transportation are at a real disadvantage. I know what that’s like, and I can identify with those students from rural communities,” she said. “However, you can’t assume that children in large cities have access to lots of resources. I have known children who lived in the low-income housing project of our town who have never traveled that much out of the city limits and who never visited a library until they were enrolled in a Smart Start program.”

From her upbringing and her MSU experience to the positive work she is doing today, Pinkie Moore believes she owes it to herself to keep going in her field as long as it keeps making a difference.

“Helping others…especially parents or caregivers with young children. Helping them find resources and services they need and helping them to understand their role ‘as their child’s first and important teacher,’” Moore said when discussing the most fulfilling part of her job.