LEXINGTON, Ky. (WTVQ) – A powerful turning point for many protesters Sunday night was when Lexington Police officers knelt in solidarity with the crowd.

The protestors asked officers to kneel with them, officers did. And then the crowd chanted “thank you” @ABC36News pic.twitter.com/qDtCsg0qaL

From the start, organizers called for no violence and while yelling at officers was encouraged, it was not encouraged to try and engage the officers.

Volunteer medics were wearing red duct tape crosses on their shirts and sleeves.

Nicki Shorr said as a registered nurse, when she saw organizers accepting volunteers she knew she wanted to step up.

“My son reached out to the other day and he said ‘if you were at a protest at what point would you leave?’ [I said] only if your immediate life or limb is threatened. So of I can be here and help continue the cause and keep going when people are trying to keep them down and I will do that,” Shorr said.

There wasn’t any incidents of looting or violence during the march around downtown or falling the protest.

Alisha Kattara said she’s proud of Lexington Police and the officer’s ability to act graciously to allow the protestors to share their feelings.

“Not all cops are bad,” she said. “We’re peaceful because our cops allow 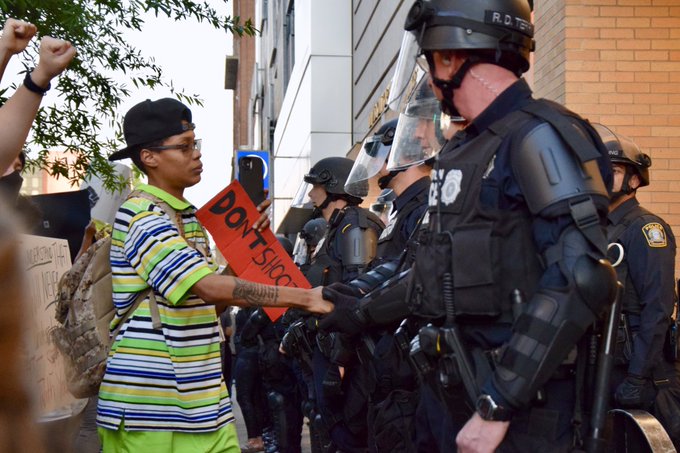 us to be peaceful. They’re not attacking us.

I talked to Alisha Kattara about police kneeling tonight…she says she’s proud of Lexington police to allow them to peacefully protest. @ABC36News pic.twitter.com/IRkCVAnPBn

Police also reached out and appreciated the way the protesters handled themselves.

“This weekend’s protests in Lexington were peaceful, and for that we are incredibly thankful. Law enforcement still has a long way to go in earning trust. We are committed to working with residents, building relationships, and keeping this community we love safe. #lexingtonky,” the department said on its Twietter account.