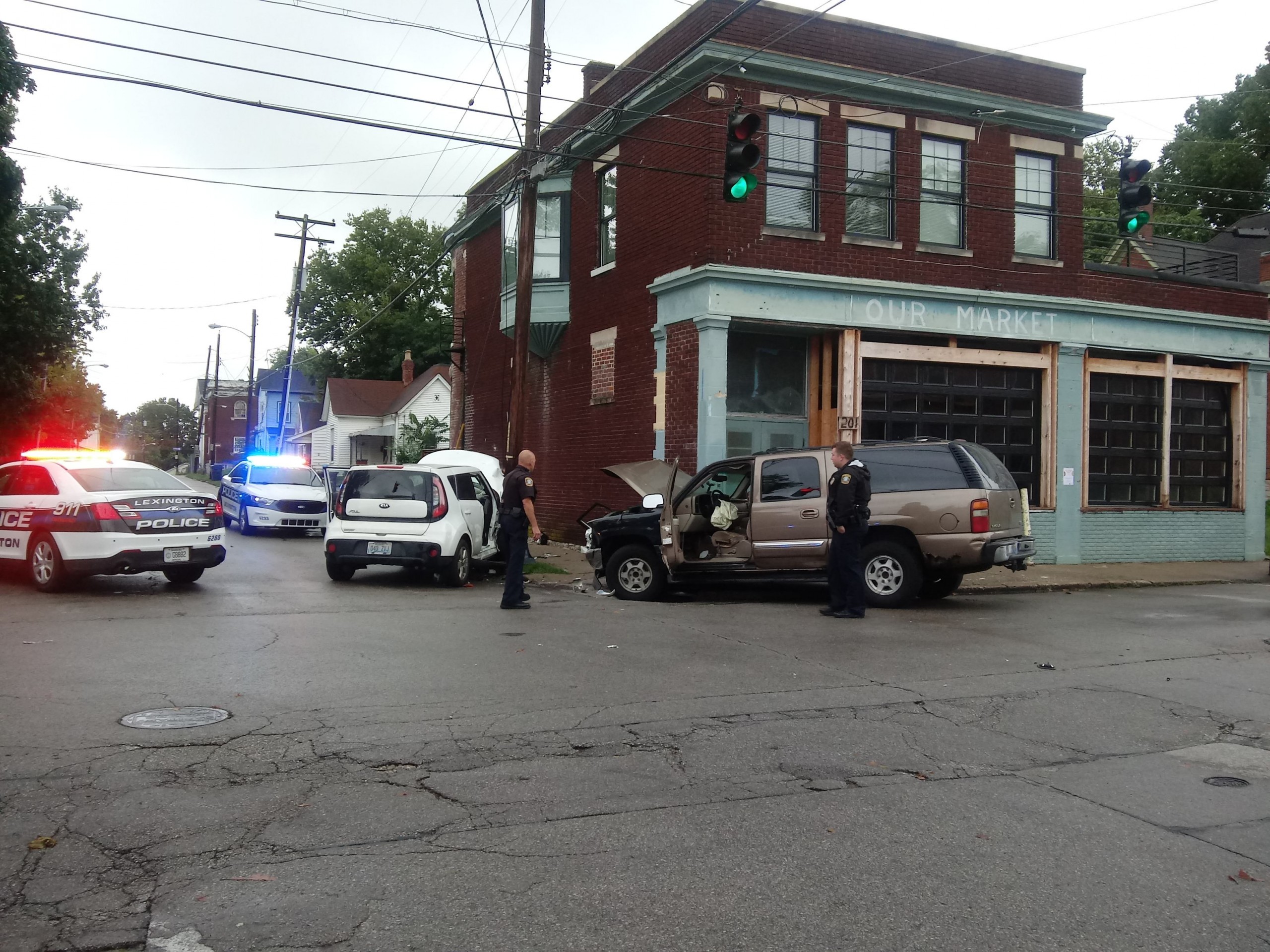 LEXINGTON, Ky. (WTVQ) – A 29-year-old Lexington man wanted in connection with the Aug. 13, 2021 shooting death of another man was caught Wednesday after a chase through city streets that ended in a crash and the man being tracked down by a police K9.

Although police have not said any of the cases were related, the arrest of Codie Calderon is the latest chapter in a string of shootings within a few days in the Ohio Street area in August.

And ironically, the arrest came not far from those shooting scenes.

According to police, at about 12:45 p.m. Wednesday, officers spotted the 29-year-old Calderon driving a gold colored GMC Yukon, but when officers attempted a traffic stop, the SUV fled. With officers logging in information to dispatchers as the suspect went through traffic signals, the pursuit went from Red Mile Road area to High Street, across Main and into nearby neighborhoods before the SUV went through a light at Fifth Street and Martin Luther King Boulevard where it crashed into a Kia Soul.

After establishing a perimeter, officers and a K9 located Calderon within about 30 minutes hiding near a house about a half a block from the crash scene in the 200 block of Fifth Street.

The arrest drew applause from a construction crew working on a house at the scene, according to a WTVQ ABC 36 News reporter.

The driver of the Soul was reported to have minor injuries, police said.

Police said Calderon is charged with:

Calderon is suspected in the shooting death of 27-year-old Cameron Martin on August 13 in the street in the 500 block of Ohio Street.

At the time, police said officers were dispatched to a call of shots fired in the 500 block of Ohio Street just after midnight Friday, Aug. 13. Dispatchers advised a group of individuals were arguing in the roadway prior to hearing gunshots. At the scene, officers found a man suffering from gunshot wounds, police said at the time.

Martin was taken to UK Medical Center where he was pronounced dead about eight hours later.

The the time, the homicide was the 26th of the year in Lexington.

Following Wednesday’s arrest, police asked anyone with additional information about this case is asked to contact Lexington Police by calling (859) 258-3600. Anonymous tips can be submitted to Bluegrass Crime Stoppers by calling (859) 253-2020, online at www.bluegrasscrimestoppers.com, or through the P3 tips app available at www.p3tips.com.

LEXINGTON, Ky. (WTVQ) – A police chase through downtown Lexington has lead to the arrest of a murder suspect.

According to Lexington Police, the chase started in the Red Mile area. It continued through downtown as officers pursued the suspect in a gold and brown colored GMC Yukon.

The suspect ran the stoplight at E Fifth Street and Martin Luther King Boulevard, hitting a woman driving a white Kia Soul. The suspect got out of the vehicle and ran about half a block up the street.

The K9 unit found the suspect hiding next to a building. Police then arrested the suspect.

The driver of the Kia Soul sustained minor injuries.