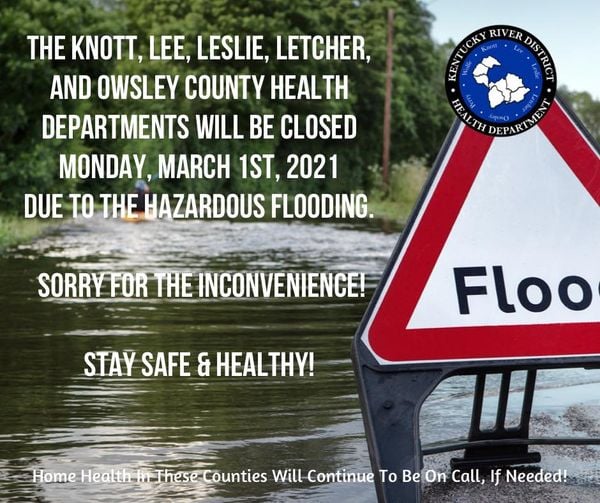 Department overnight but rescue teams from the county used boats to save the vaccines and move them to Wolfe County.

Some other equipment was damaged by flood waters and health departments in Lee, Knott, Leslie, Letcher and Owsley counties were closed Monday because of hazardous flooding.

The flooding was part of statewide incidents that State EMA Director Michael Dossett called “one of the biggest flash floods” the state has ever seen.

That included water rescue in at least 42 of the state’s 120 counties, Dossett said, noting that near-record rains were recorded in a number of places with a swath stretching from Richmond to Jackson to West Liberty where more than five inches fell.

In Lee County, much of Beattyville, the county seat, experienced some degree of flooding, according to emergency responders and Facebook posts.

During his daily briefing Monday, Gov. Andy Beshear praised the work of the emergency responders for saving the vaccines and their efforts.

he Lee County Health Department lost power and was flooded, but vaccines in the department’s care were saved.

“Last night’s weather flooded the Kentucky River District Health Department causing the power to go out and jeopardizing the COVID-19 vaccines being stored there,” said Gov. Beshear. “Thankfully, the Kentucky River District director, Scott Lockard, and his incredible team, along with the Lee County Emergency Management, conducted a water rescue to keep these vaccines safe for our people. These folks lost a number of vehicles that day, but they did not lose one dose of vaccine.”

The governor and state officials said the State Emergency Operations Center is activated at Level 3 operations status, supporting the response to severe flooding in some counties after extremely heavy rainfall across the commonwealth – more than six inches in some areas.

“Our first responders have been in harness saving lives throughout the entire weekend. We will be facing the impact of flooding of rivers and tributaries throughout the commonwealth over the next few days,” said Dossett. “The National Guard has been activated with 72 personnel on duty in Barren, Calloway, Johnson, Laurel, Pike and Rockcastle counties, providing support and equipment: 23 high-axle vehicles, two helicopters, six backhoes and six dump trucks to support resource requests.”

In total, 34 cities and counties have declared states of emergency. Four emergency shelters and one warming center has been opened. Swift water rescues were conducted in at least 42 counties.