Tommy and Sharon Bickers bought the winning ticket at Liberty Shell Mart in Liberty on Saturday.

It’s one of the Kentucky Lottery’s large 8-inch by 8-inch extended play tickets.

“Something just told me to get that ticket.  I don’t usually buy those kind, the longer play,” said Sharon.  The chance paid off for Sharon, she won $125,000!  “This just doesn’t happen to me, like never! The most I’ve ever won is $500 on a Scratch-off,” Sharon told lottery officials.

“We stopped to check the ticket at a Kroger and the clerk said, ‘it says to claim at lottery so yep, it’s definitely a winning ticket,’ so I grabbed it back.  I had I already signed the back of it, I knew to do that, first thing,” Sharon told lottery officials.

The Bickers plan to use the money to pay off their house and bills.

Sharon said the rest will go into the bank because she plans to retire from Buffalo Trace in a few years.

Sharon is a two-time cancer survivor and hasn’t been on vacation in a while because of it, so a much needed and deserved vacation is in the works. 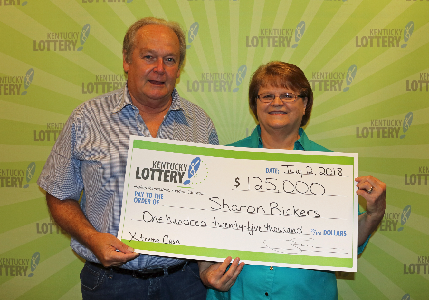