UPDATE (2/18/18 11 p.m.)- Two arrests have been made after an all night investigation into a school threat in Jessamine County. 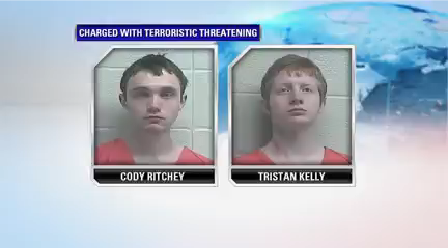 Police say the boy pictured in the threat had nothing to do with it.

According to officers, the suspects used the boy’s photo on a fake Snapchat account to make it seem like he had sent the threat.

The Police Department tracked IP addresses to find where the threat came from.

“I think in this situation, they didn’t understand the severity of the consequences of what they had done. I don’t think their intent was to do initially what they did but in fact, it caused mass chaos and lots and lots of resources were used, lots and lots of people were upset and so, unfortunately, their consequence is that they were arrested last night for felony offenses,” Nicholasville Officer Kevin Grimes said.

UPDATE (02/18/18 12:30 a.m.)- The Nicholasville Police Department says it is investigating the Snapchat threat. The Department says the person accused of making the posts may not have been involved.

PREVIOUS: The Jessamine County Sheriff’s Office confirms it is investigating a photo that appears to threaten a school.

The photo shows a Snapchat photo of young man with a gun and reads, “Be ready for school monday [sic] Jessamine County”.

Deputies say they have been getting several calls about it.

ABC 36 just spoke to Jessamine County Schools last week in light of the shootings in Florida and Marshall County. Read what the district said about keeping schools safe here.

This is a developing story and ABC 36 will update it as soon as more information comes in.