TOTZ, Ky. (WTVQ)- State police say the mother who was severely burned in a house fire Monday morning has died.

KSP says 42-year-old Allyson Howard passed away in a hospital in Augusta, Georgia.

The three-year-old twins were found dead inside the home, after the fire.

TOTZ, Ky. (WTVQ) — State police have released the names of the couple who were airlifted after suffering life-threatening injuries from a Monday morning fire.

39-year-old Dennis Chad Howard and his wife 42-year-old Allyson Howard were both flown to a hospital in Tennessee then on to a burn unit in Augusta, Georgia.

State police say their three-year-old twins were found dead inside the home.

They say they will not be releasing the twins’ names.

KSP says they’re currently waiting on an update from the hospital on both adults.

The cause of fire is still under investigation. 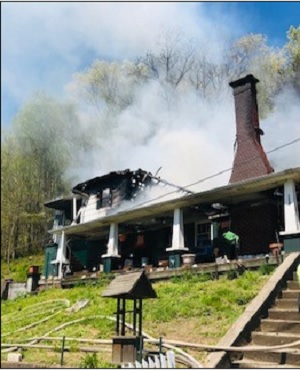 TOTZ, Ky. (WTVQ)- State police say three-year-old twins have been found dead in the home where a fire broke out Monday morning.

No other details were released.

A charity group called With Love From Harlan is raising money for funeral costs.

You can donate on Facebook here or directly to the funeral home:

A GoFundMe page has also been set up to help with medical and funeral expenses. You can donate here.

Crews were called to the home off Ky 522 around 11:18 a.m. and found the husband and wife suffering from life-threatening burns.

They were flown to a hospital in Tennessee then transferred to another hospital in Augusta, Georgia due to the extent of their injuries, according to police.

Police say the couple has three-year-old twins that have not been located. They say the heat from the fire is still too intense to search the home for the children.

The cause of the fire is still unknown.