CARRIE, Ky. (WTVQ) – A 37-year-old woman and a five-year veteran state trooper were 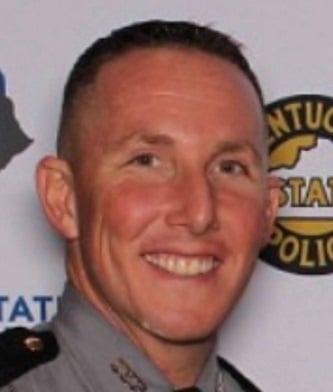 The incident happened at about 4:30 a.m. July 10 in the Carrie community when Tiffany Renee Miller opened fire on Trooper Bradley Couch when he tried to stop the suspected stolen car she was driving, the KSP said.

In a statement Wednesday, th KSP said its dispatch center received a call reporting a stolen vehicle from a residence.

While driving to the residence, Couch spotted a vehicle matching the description of the stolen car and initiated a traffic stop. The driver and lone person in the car, identified as Miller, fired a weapon at Couch who returned fire with his service weapon, the KSP said.

Couch was wounded and Trooper Shane Jacobs arrived and more gunfire was exchanged with Miller who was wounded.

Troopers were able to talk Miller from the car without further incident, the KSP said.

Couch was transported to Hazard ARH for treatment and released later that day.

He continues to recover from his injuries.

Miller was originally transported to Hazard ARH, but after being medically evaluated, was transferred to University of Kentucky Albert B. Chandler Hospital, the KSP said..

Once Miller was released from the hospital and medically cleared for incarceration, she was lodged at the Kentucky River Regional Jail.

In accordance with KSP’s policies and procedures, Couch and Jacobs were placed on administrative leave at the time of the incident.

KSP has statewide jurisdiction and investigates officer-involved shootings throughout the commonwealth as requested by local, state and federal law enforcement agencies. KSP is committed to being transparent while ensuring the integrity of the investigation.

To protect the integrity of an ongoing investigation, it is KSP’s Standard Operating Procedure not to release specific details until vital witnesses have been interviewed and pertinent facts gathered. Timelines to complete investigations vary based on the complexity of the case.

KSP says the shooting happened Saturday around 4:30 A.M. in the Carrie Community of Knott County.

According to KSP, a trooper responded to a call of a stolen car from a home…and while on his way there, the car drove by him.

KSP says the trooper attempted a traffic stop when the driver of the car started shooting at the trooper.

The trooper and the driver were both hit during the exchange.

Both were taken to the hospital. The trooper has since been released…the driver remains in the ICU.

No names have been released.