SPARTA, Ky. (WTVQ) – What had been rumored is rumor no more, Kentucky Speedway is losing its NASCAR Cup Series race in 2021.

“Of course, we’re disappointed the Bluegrass State is not on NASCAR’s schedule for 2021, as the past two decades have been filled with memorable moments that will last a lifetime,” said Mark Simendinger, executive vice president and general manager of Kentucky Speedway.

Chicagoland Speedway is also being dropped from next season’s Cup Series schedule.

NASCAR is expected to officially announce its 2021 schedule on Wednesday.

After hosting successful lower-tier NASCAR events following its opening in 2000, Kentucky Speedway didn’t get its first Cup Series race until 2011.

The inaugural Cup race was a sellout, but the event turned into a public relations disaster for the track because of parking and traffic control issues.  Thousands of fans who had tickets never made it to the track to see the race due to a massive traffic back-up on I-71.  The track never sold-out another Cup Series race.

The current complaint among some NASCAR fans and even some drivers is there are too many cookie-cutter 1.5 mile oval tracks on the schedule.  Kentucky Speedway and Chicagoland Speedway fall into that now unpopular category.

Some fans have been asking for more short tracks and road courses for the sport’s top-tier racing series. 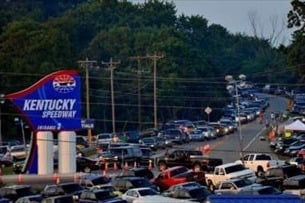