New federal data shows the coronavirus pandemic has contributed to the country’s deadliest 12-month period for drug overdose fatalities, including a sharp increase in overdose deaths in the Ohio Valley.

According to the latest data by the Centers for Disease Control and Prevention, more than 81,000 people died due to drug overdoses in the 12 months from May 2019 through May 2020 — the largest number of overdose deaths recorded in a year — forcing the federal agency to issue a health advisory making recommendations to tackle this spike in deaths.

In the Ohio Valley, West Virginia and Kentucky each reported a 22% jump in overdose deaths compared to the same period a year earlier, while Ohio recorded a 13% rise.

West Virginia had more overdose deaths per 100,000 people in this 12-month period than anytime since January 2015 when CDC began to document overdose death estimates.

The numbers confirm fears by public health officials that the stress and isolation of the pandemic would magnify the addiction crisis. 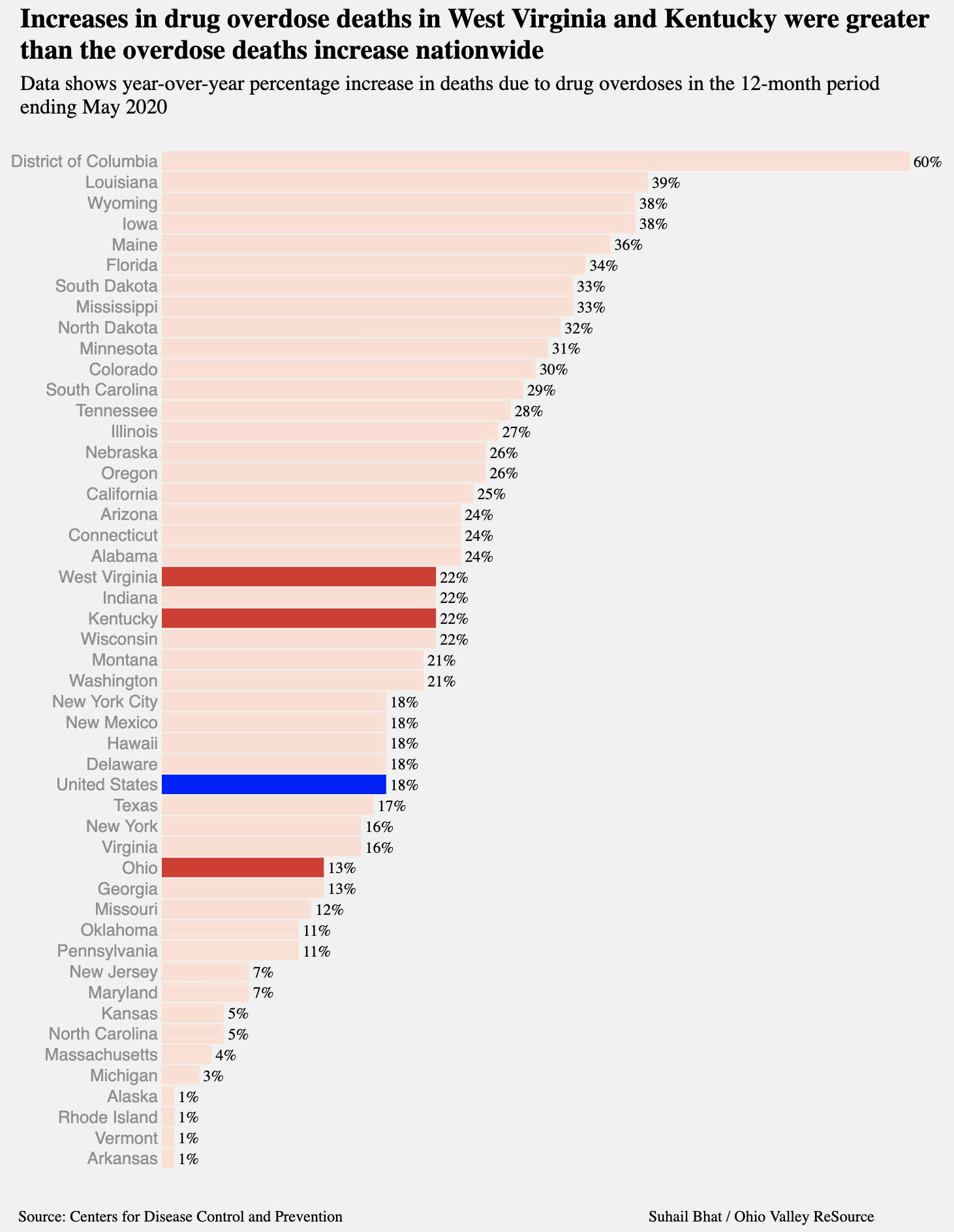 When the spread of the coronavirus stagnated life and upended the economy in early March, vulnerable people became more vulnerable than ever. After states imposed lockdowns and asked people to curtail their outside activities, mental health helplines started to see a spike in calls suggesting that the fallout of the pandemic would be a tougher challenge both financially and emotionally.

People suffering from drug addiction also face disruption to the support systems and treatment they need in order to remain sober or survive, according to experts.

CDC Director Robert Redfield, in a report on Dec. 17 , said “the disruption to daily life due to the COVID-19 pandemic has hit those with substance use disorder hard.”

“As we continue the fight to end this pandemic, it’s important to not lose sight of different groups being affected in other ways. We need to take care of people suffering from unintended consequences,” Redfield added.

Although the drug overdose deaths were already increasing pre-pandemic, these were accelerated by the pandemic to a level where many states have more overdose deaths per capita than seen at least since January 2015.

This rise in overdose deaths is primarily driven by synthetic opioids such as fentanyl. This is concerning for the Ohio Valley, where the opioid crisis has already claimed thousands of lives and pushed families into poverty and chaos, experts said. 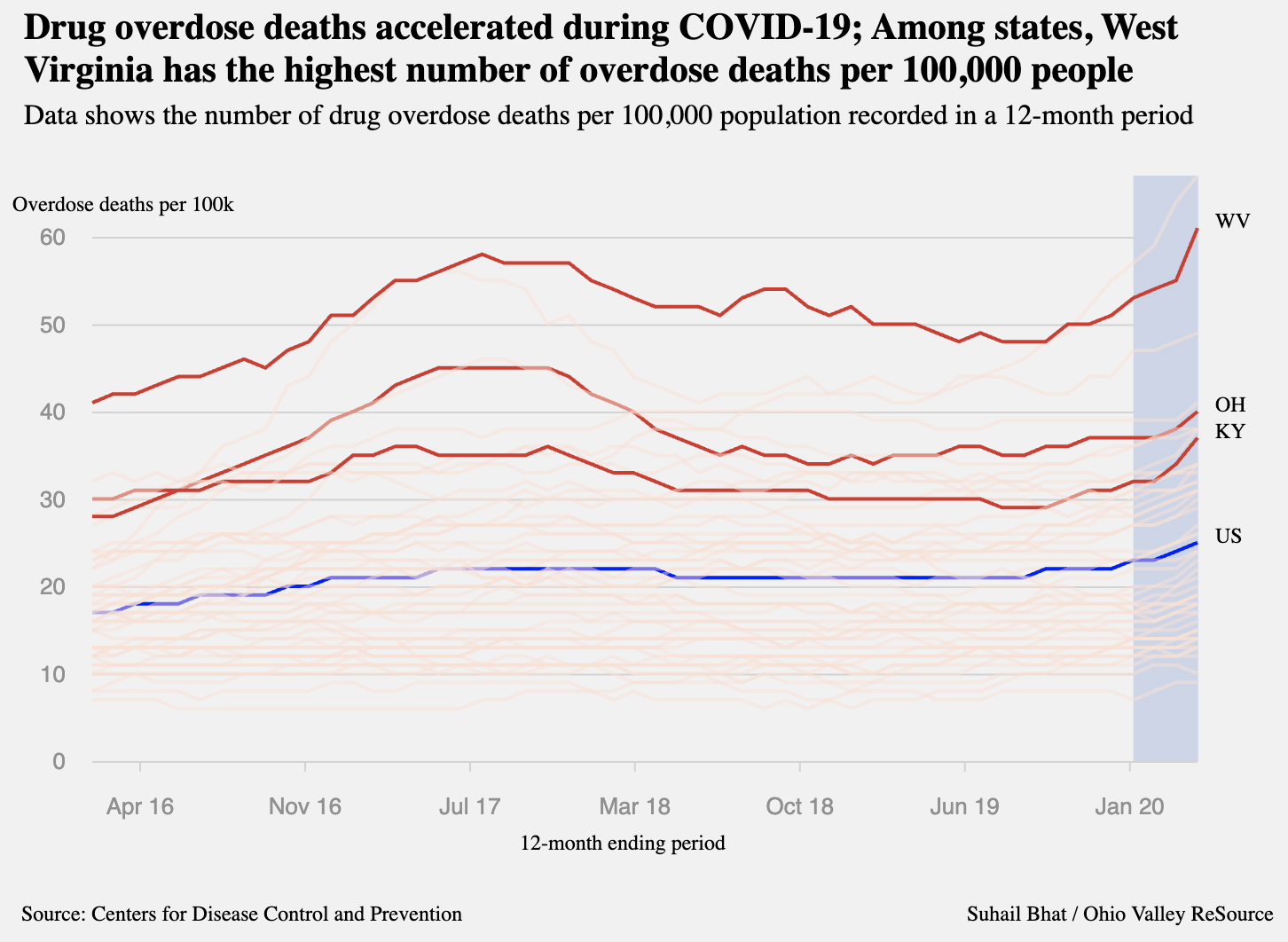 The number of fatal overdoses started on a downward trend in the Ohio Valley from mid-2017 until fall of 2019 when it started to edge up. With the fuel provided by the coronavirus, that recovery has not only been reversed, but the region, especially West Virginia, now appears in a worsening opioid crisis.

Meanwhile the CDC has made public health departments, doctors, first responders, harm reduction organizations and community members aware of the latest numbers and issued recommendations such as early intervention and expanded use of the anti-overdose drug naloxone.

“The increase in overdose deaths is concerning.” said Deb Houry, director of CDC’s National Center for Injury Prevention and Control.

“CDC’s Injury Center continues to help and support communities responding to the evolving overdose crisis,” she said. “Our priority is to do everything we can to equip people on the ground to save lives in their communities.”

The data released by the CDC is provisional, meaning these numbers can be subject to change. Also, since the data only goes as far as May 2020, this only captures the early part of the pandemic and its compounding effects on addiction. It is likely that the overdoses might have risen further since then, especially in the Ohio Valley states that implemented stricter guidelines after the summer when coronavirus cases began to surge in the region.

Though it would be hard to portray an exact picture of how substance abuse disorder patients are wrestling the impact of COVID-19, anecdotal evidence suggests a rising level of anxiety among people across the country. While the COVID-19 vaccine rollout might have calmed some nerves, it would take months before life goes back to normal.

Until then, the possibility of increase in fatal drug overdoses looms. If that happens, these states might be looking at the emergence of an exacerbated public health crisis besides the one they are dealing with right now.

Suhail Bhat is a data journalist and 2020 graduate of the Data Journalism program at Columbia Journalism School. Before attending Columbia, he was a correspondent at Reuters, where he covered Asian corporate news and Wall Street.