FRANKFORT, Ky. (WTVQ) – The chairperson of the Kentucky Parole Board has rescinded a controversial policy that would have granted another parole hearing for inmates who had already been ordered to serve out their life sentences.

Chairperson Ladeidra Jones’ letter announcing the policy change was included with a court motion asking a judge to dismiss a lawsuit from Kentucky Attorney General Daniel Cameron and Commonwealth’s Attorney Jackie Steele which asked the court to block the new policy.

The Parole Board says the lawsuit is a moot point now that the policy change has been rescinded.

It should be noted, Lelia Vanhoose was the board chair when the controversial policy was changed.  Governor Andy Beshear replaced Vanhoose with Ladeidra Jones on June 21.

The controversy began in April when the Parole Board changed its policy to say people sentenced to life in prison or life without the possibility of parole for 25-years could no longer be ordered to serve out their sentences at the first parole hearing.  The board applied the change retroactively, giving another chance at parole for dozens of inmates who had been sentenced to life.

The move was met with immediate criticism from prosecutors and family members of crime victims.

The July 1 letter from Chairperson Ladeidra Jones is below: 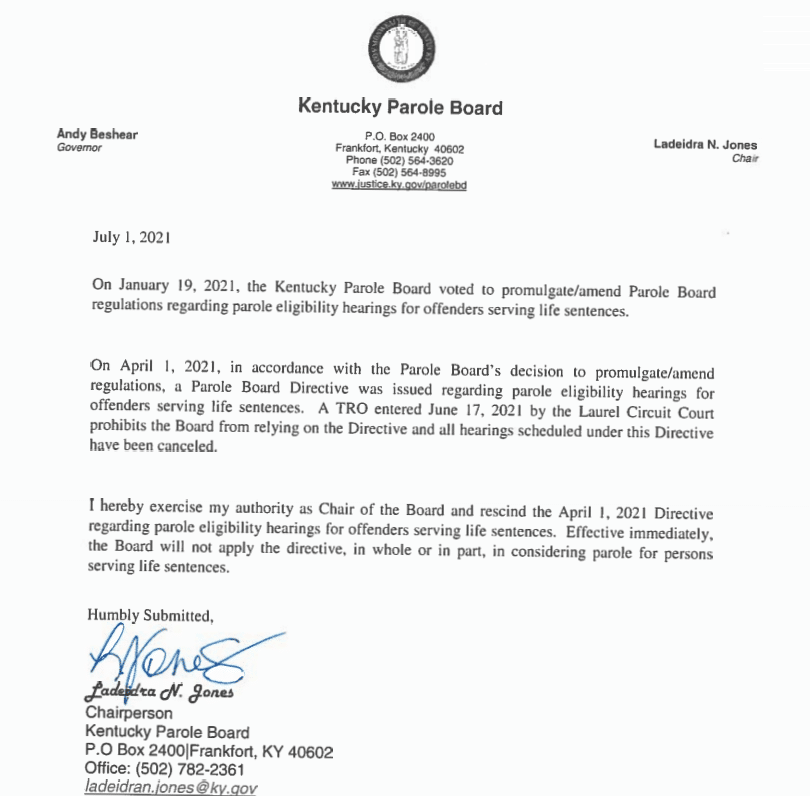