LEXINGTON, Ky. (UK Athletics) — The University of Kentucky men’s and women’s track and field teams are ranked Nos. 2 and 3 nationally, respectively, by the United States Track & Field and Cross Country 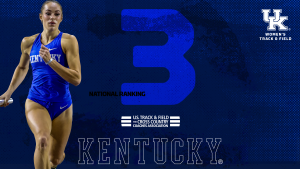 Coaches Association (USTFCCCA) in the first top-25 poll of the indoor season.

The men’s team earned the No. 2 ranking through several impressive nationally ranked performances throughout the first three meets of the season.

The Wildcats currently hold the fastest 4x400m relay time in the nation at 3:05.01, run at the Jim Green Invitational by Dwight St. Hillaire, Brian Faust, Jacob Smith and Kennedy Lightner.

Lightner ran the second fastest 200m in the nation this season (20.52) at Texas Tech this past weekend.

Dwight St. Hillaire holds the fastest 400m time in the Southeastern Conference and second-fastest nationally with his 46.22 run in Lubbock. Before the altitude conversion, his raw time was 46.11 seconds.

Keaton Daniel earned the highest mark in the SEC in the pole vault with a win at the Jim Green Invitational (18’0.5”/15.50m), which also tied Matt Peare’s indoor school record.

Abby Steiner is leading Kentucky track & field with three nationally ranked performances. She holds the fastest 200m time of the season nationally after her 20.58 run at the Jim Green Invitational.

In December at the Cardinal Classic in Louisville, Steiner broke the 40-year-old 300m collegiate record, running the race in 35.80 seconds.

She is also a member of the nation’s leading women’s 4x400m relay team that ran a school record 3:28.62 (3:29.06 after altitude conversion) in Lubbock on January 21. Masai Russell was the lead off leg, followed by Steiner in second, Karimah Davis in third and Alexis Holmes in fourth.

The women’s distance medley relay of Rachel Boice, Karimah Davis, Phoebe McCowan and Tori Herman has the fastest time in the event in the SEC (11:22.68) and is among the top five times in the country.

Also ranked in the top five in the country is Masai Russell’s 60m hurdles personal best of 8.01 from the Jim Green Invitational.

The Wildcats will return to Lexington to compete in the Rod McCravy Memorial Meet on Friday, January 28 beginning at 10:30 a.m. and Saturday, January 29 at Nutter Field House. The meet will be broadcasted on SEC Network+.