UPDATE: Kentucky Guardsmen get send off, return from D.C.

WASHINGTON D.C. (WTVQ) – Kentucky’s National Guardsmen returned to the state Friday after getting a send off from the Capitol after serving as part of the contingent of some 25,000 Guardsmen from across the country who provided security during Wednesday’s Presidential inauguration.

Among those thanking the soldiers was Senate Minority Leader Mitch McConnell.

McConnell also made the remarks below on the Senate floor:

“Yesterday evening, we learned that some of the National Guard forces who have been helping protect the Capitol complex were being made to rest in parking garages between their shifts.

“I don’t think a single Senator feels that was acceptable. I am glad the situation was resolved and I hope we learn exactly what happened.

“I want to again thank all the National Guard, including more than 300 Kentucky Guardsmen, and local and federal law enforcement who have helped supplement our very own Capitol Police in the wake of January the 6th. Your Congress and your country appreciate all you’ve done to secure the Capitol and the inauguration.

“Later today, I’ll have the honor of meeting a number of my fellow Kentuckians who have been helping out here at the Capitol. It’s going to be the highlight of my day.

“In the near future, Congress needs to smartly transition toward a more sustainable security presence. Keeping the Capitol safe cannot and will not require huge numbers of uniformed troops and vast systems of emergency fencing to remain in place forever.

“With the inauguration behind us, we should find the right middle ground between the unacceptable lapses three weeks ago and the extraordinary short-term measures that have been in place since.

“And in the meantime, we need to make darn sure that we look after the men and women who look after us.” 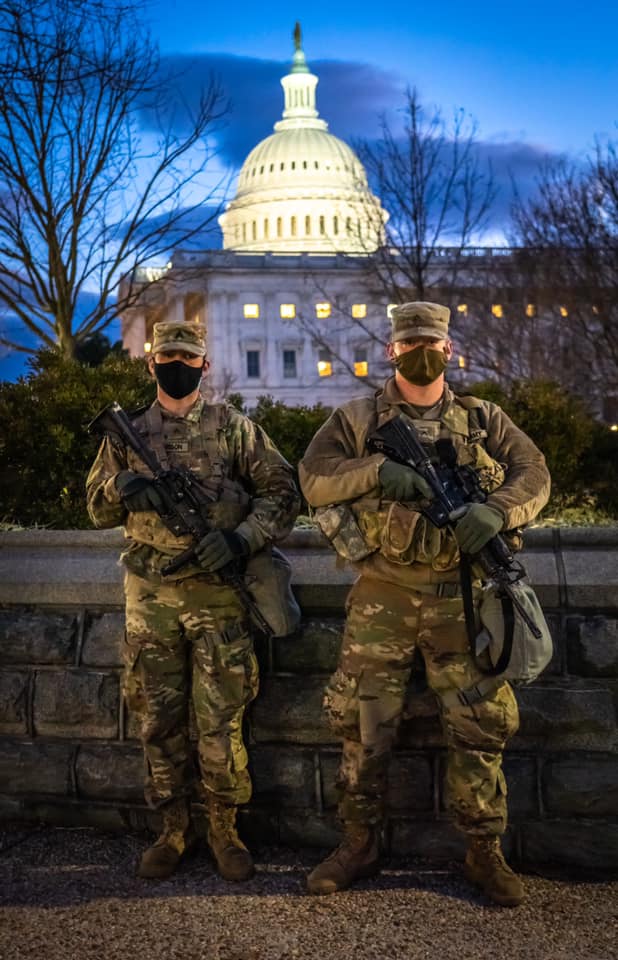 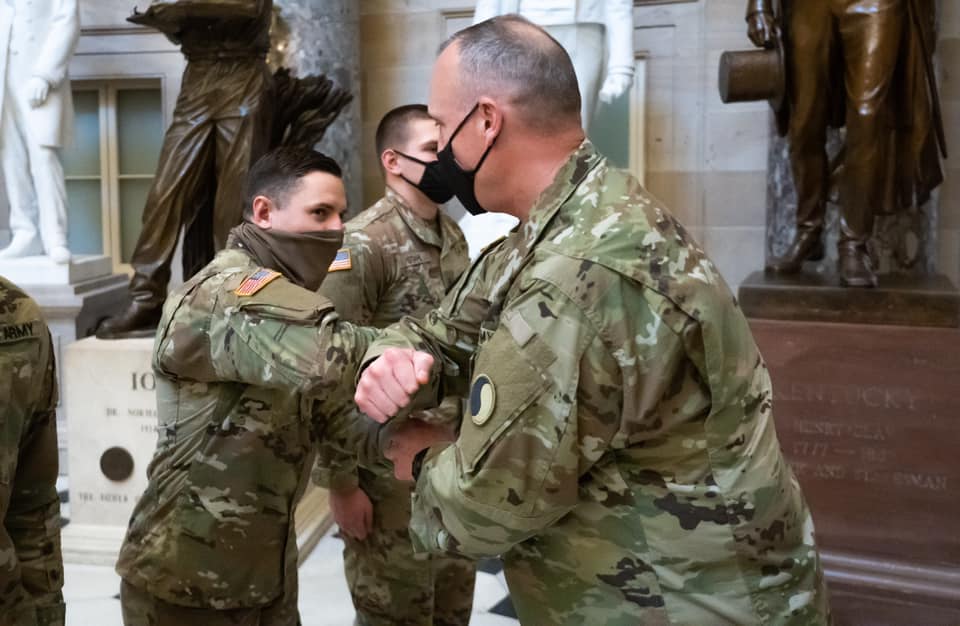 National Guard Soldiers and Airmen assisted federal agencies in securing the National Capital Region during the 59th Presidential Inauguration in Washington, D.C., Jan. 16-24, 2021. At least 25,000 National Guardsmen from around the country were activated to support the inauguration as security heightened following the U.S. Capitol Building breach on Jan. 6. 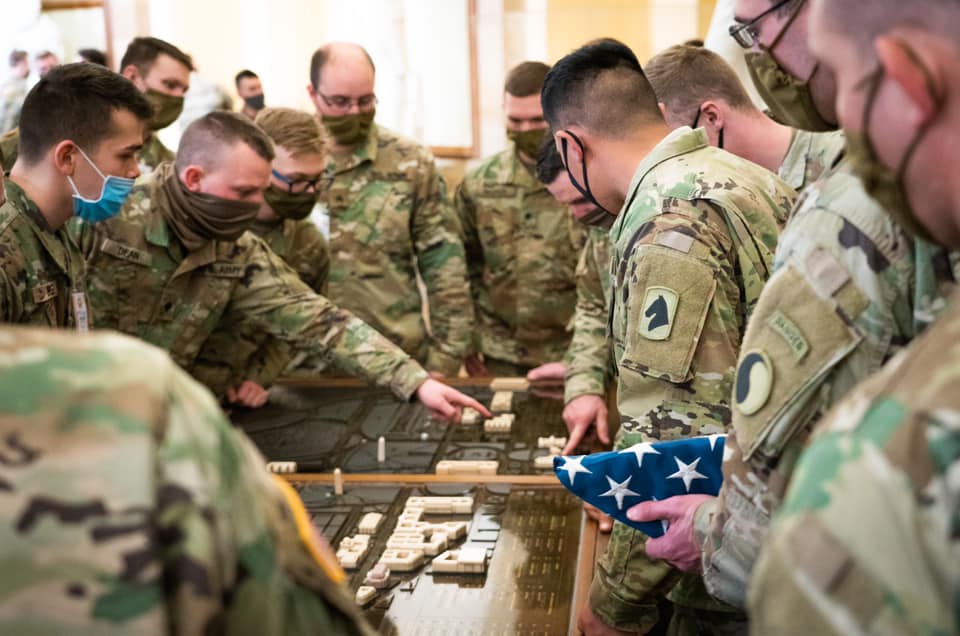 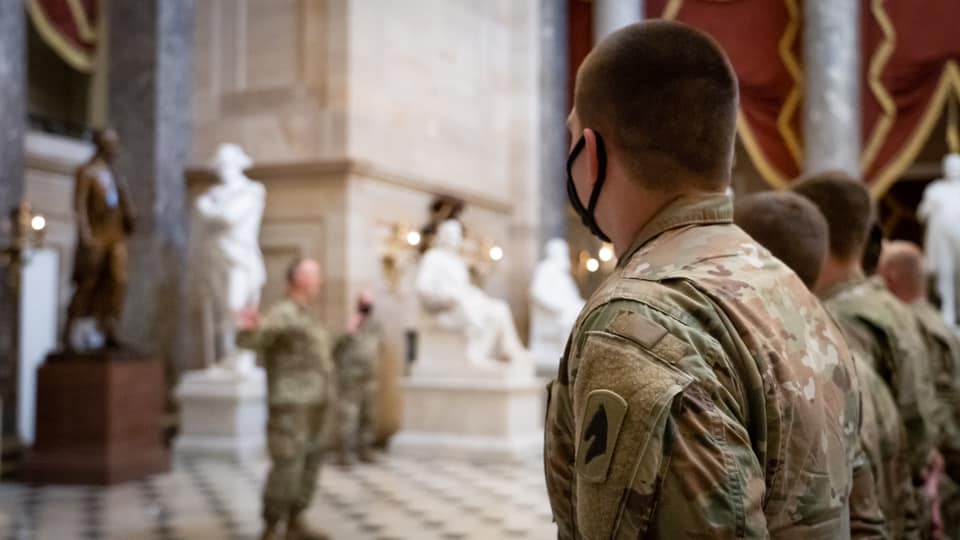 Despite the overwhelming number of Guardsmen present this year, the National Guard’s involvement in presidential inaugurations is as old as the country itself.

Kentucky Soldiers with the 1-149th Task Force Mountain Warrior, a composite of Soldiers from 1-149th Infantry and the 138th Field Artillery Brigade were sworn in as Capitol Police and augmented security within U.S. Capitol Building grounds. The task force worked 12-hour shifts from the afternoon into the early morning hours.

“We came together as a collection of individual Soldiers to form a cohesive unit to successfully accomplish a unified mission—to secure the Capitol grounds,” Penn said. “I’m extremely proud and humbled to have the opportunity to lead and serve such a fine group of Soldiers. It’s the highlight of my career.”

U.S. Capital authorities called upon Soldiers and Airmen with the Kentucky CERF-P to conduct a specific and unique mission: to decontaminate victims in the event of a mass chemical attack leading up to and during the inauguration. Service members established decontamination and medical lanes at the Naval Observatory, partially removed from the heightened security in the National Capital Region.

This is the first CERF-P set up in support of the Vice President.

“Members of the CERF-P sacrificed time away from their families in the middle of a pandemic and unprecedented uncertainty to showcase their abilities and readiness,” said Army Lt. Col. Gary Barr, 103rd Chemical Battalion Commander. “Their actions reflect the professionalism of the Kentucky National Guard.”

The CERF-P is a specially designated response force consisting of medical and CBRN personnel trained to save lives and improve patient outcomes during a chemical attack. Soldiers are specially trained on decontamination equipment and Airmen run the trauma bays, with both conducting intensive training throughout the year to prepare for events just like the inauguration.

Kentucky’s Air and Army National Guard has built strong cross-disciplinary relationships between services and large missions often see the two operating in tandem. Coordination between branches can introduce special challenges that service members at all levels must overcome, but the National Guard is a more lethal force because of it.

“The Kentucky CERF-P has been a unified mission from the very start,” said Air Master Sgt. Nikki Wilson, 123rd Medical Detachment medical admin non-commissioned officer in charge and CERF-P liaison. “Each branch brings different assets and experience to the table, and our years of experience together has built really strong bonds between us. I truly love my Army counterparts.”

Service members with the CST, another unit combining Air and Army Guardsmen, provided plainclothes assistance to the Department of Energy to screen inauguration event locations for hazardous or radioactive substances. Equipped with specialized backpacks, the CST provided the crucial service in helping make sure everyone who came to the National Capital Region could do so safely and without fear.

“This is a continuation of Kentucky’s tradition of service to the state and our Nation as a whole,” said Army 1st Lt. Patrick McCoy, the CST Officer-in-Charge for inauguration support. “Regardless of the capacity in which we are called upon, Kentucky is going to play an integral role in accomplishing the mission.”

The Kentucky National Guard deploys its Soldiers and Airmen for civil service missions, combat operations, disaster relief, and more across the globe, but for many, being activated to the Nation’s Capital was an especially honorable and once-in-a-lifetime experience.

“This is everything I’ve ever dreamed of,” said Army Staff Sgt. Adam Stoppelwerth, the 299th supply sergeant. “I served in Iraq in 2011, and now I get to support the other side of the Guard. My career has come full circle, because now we’re here at the home front protecting the Nation’s Capital—what the Guard was designed for.”

“I am proud of the Guard because we set the standard on how to operate jointly,” said Ehrman. “There was a spirit of cooperation and a willingness to take on different roles.”

In spite of a divisive era, the National Guard answered the call to action and brought the country together at the Nation’s capital. The unprecedented interstate cooperation and success of this historic National Guard activation sheds new light on the resilience and steadfast loyalty of United States Citizen-Soldiers.

“Everyone here swore an oath to defend the Constitution,” said Stoppelwerth.

“It’s what binds everyone together.”