UPDATE: (11/18/21 12:45 p.m.) – The Amber Alert for Noah Clare and Amber Clare has been canceled. According to TBI, the two “have been found safe and sound, just outside of San Clemente, CA! Jake Clare is in custody!”

LEXINGTON, Ky. (WTVQ) – The Tennessee Bureau of Investigation (TBI) shared new pictures of Noah Clare with Jacob Clare, accompanied by who investigators believe to be Amber Clare. According to TBI, the pictures were captured on surveillance camera in San Clemente, California on November 11.

“This is also the first time since they’ve disappeared we’ve been able to definitively place #AmberClare with Jacob,” shared TBI. TBI continues to work with the Gallatin Police Department, the Federal Bureau of Investigation, and numerous local and state agencies to locate 3-year-old Noah Clare, who became the subject of a Tennessee AMBER Alert on Tuesday, November 16.

Noah’s mother reported him missing on November 7 to the Gallatin Police Department, according to TBI, saying her ex-boyfriend, Jacob Clare, failed to return their three-year-old son at the conclusion of a scheduled visitation. The next day, the boy’s mother applied for an emergency motion to suspend parenting time, which the court granted, along with a temporary restraining order. Gallatin Police then secured a warrant, charging Jacob Clare with one count of Custodial Interference, after which the TBI issued a Tennessee Endangered Child Alert for Noah Clare.

According to TBI, Jacob Clare was likely traveling in a silver Subaru Legacy. The vehicle was spotted in Arizona on November 7 with clothing, camping gear, and other items. A tow company in California impounded the vehicle on November 13. Since then, TBI says law enforcement has been processing evidence that might prove helpful in generating additional investigative leads.

If you see Noah or Jacob Clare, or have information about their whereabouts, contact 911, the Gallatin Police Department at 615-451-3838, or the TBI at 1-800-TBI-FIND. Tips may also be emailed to TipsToTBI@tn.gov. You can view additional pictures HERE. 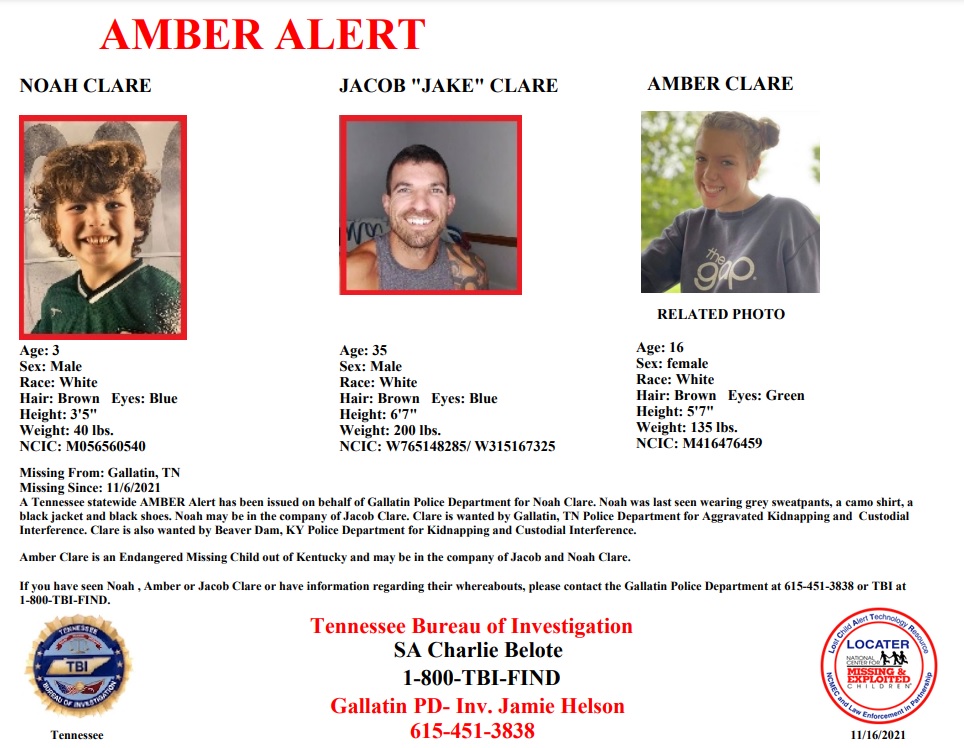 MORE: We're sharing these to give you our best guess at what they might look like now, especially side-by-side.

This is also the first time since they've disappeared we've been able to definitively place #AmberClare with Jacob.