LONDON, Ky. (WTVQ) – A woman in Laurel County is working to rehabilitate sick or injured wildlife and then release them when they’re better.

Tonya Poindexter formed a 501(c)(3) nonprofit in London about two years ago called Wilderness Trail Wildlife Center. She doesn’t do it for the pay or the praise, it’s her passion for wildlife that makes her our ABC 36 Hometown Hero.

Poindexter said her passion for wildlife comes from her grandfather and a promise she made to a skunk name Pepe.

“I rescued her in 2016, her family got run over by a tractor,” said Poindexter, who added that a family member accused Pepe of biting them which resulted in fish and wildlife taking and putting her down. “I made a promise to Pepe that I would do everything I could to help all wildlife.”

Since then, Poindexter made it her mission to get trained and certified. Two years later, she’s now caring for a wide variety of animals like Crash, an opossum.

“A little boy and his mommy found him in their driveway and he was infested with maggots,” said Poindexter.

Crash is one of many success stories. But many of the wildlife she cares for come with injuries, are malnourisned or abandoned.

“If they get sick they just get better or they die on their own. They don’t have doctors that people take them to. So I’m the person that will be able to do that and I don’t charge anything,” explained Poindexter.

As you might imagine, from the supplies to the food and housing, it’s an expensive endeavor and Poindexter pays for it on her own or through donations.

“Last year, I rescued and saved and released 288 animals that would’ve otherwise died. I don’t get paid for what I do. I actually have to pay the fish and wildlife to be able to keep my license,” said Poindexter.

It’s also not an easy job.

“These are babies. They have to be fed like every three hours right now,” explained Poindexter while feeding a hungry baby squirrel.

“By the time you get finished feeding, it’s time to turn right back around and feed and clean up after them,” said Poindexter.

And because most of the wildlife are nocturnal, Poindexter has to adjust her schedule.

“There’s not much sleep. And the morning is actually the roughest time because they’ve partied all night,” explained Poindexter.

It’s a time consuming passion that Poindexter wouldn’t trade for anything.

“Releasing of them is bittersweet because some of these animals I’ve had since they were itty bitty little things,” said Poindexter.

And while they can’t speak, Poindexter says she knows they’re grateful, “I see it in the faces of all the animals and that’s good enough for me.”

The wildlife Poindexter can’t release, like Cupee an opossum who has a deformation in its’ mouth preventing it from eating normally, she keeps as educational ambassadors, taking them to schools or events. She doesn’t charge for that either.

Based on public feedback at those events, Poindexter said it’s all worth it and, “makes me feel good.”

The only wildlife Poindexter doesn’t treat are birds.

She’s still working on building enclosures for new wildlife that keep coming every day. You can find more information and ways to donate to Wilderness Trail Wildlife Center, HERE. 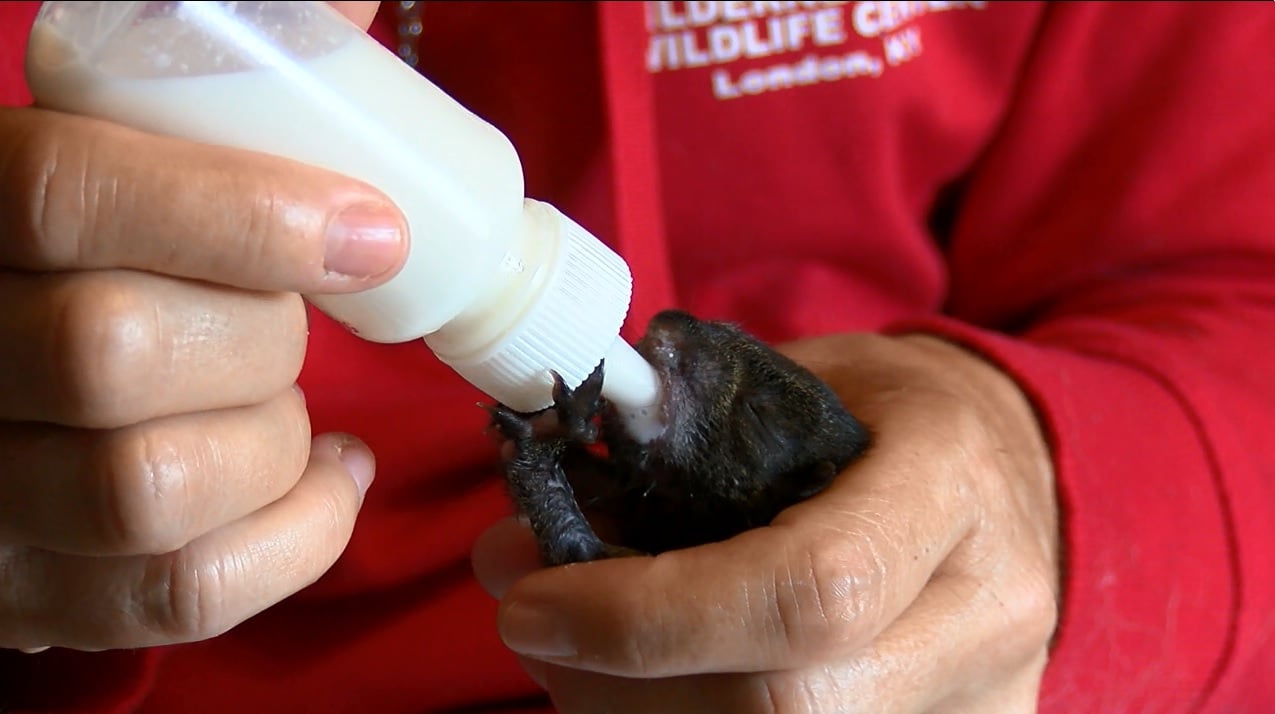 Poindexter feeds a baby squirrel, one of many wildlife she’s currently caring for