“This new award recognizes classified school employees who have displayed excellence in serving our students,” Commissioner of Education Jason E. Glass said in introducing the award and the recipients.

Thomas and Walker will represent Kentucky in the competition for the national Recognizing Inspiring School Employees (RISE) Award, to be presented this spring by the U.S. Department of Education.

Gov. Andy Beshear and Lt. Gov. Jacqueline Coleman created the KESSP Award, which is intended to be an annual event, to recognize the work of Kentucky’s more than 46,000 classified school employees.

“These employees often are the unsung heroes of our school systems,” Glass said. “Classified school employees serve in vital and often overlooked roles, from driving our kids to school, to preparing their meals, to working with partner agencies to ensure vital care health needs are met.” 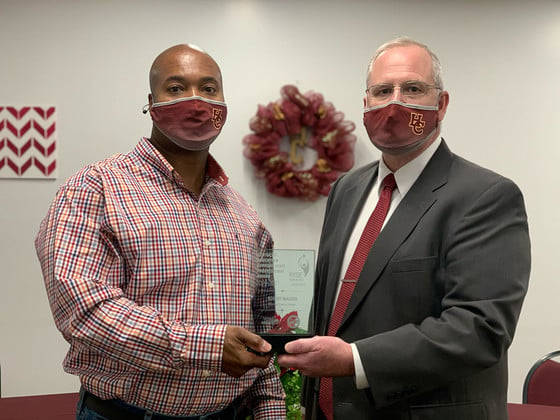 Walker has worked for Harrison County Schools for 21 years, mentoring and counseling students. When Harry Burchett became superintendent in 2019, Walker was one of the first people he met, Burchett said.

“He’s at every ball game, every event,” he said. Students and alumni constantly seek out Walker to talk to him, Burchett said.

Walker said he accepted the award not only for himself, but for his family and the Harrison County school system. He praised the community, the school district and its personnel.

Walker said he had opportunities elsewhere, but remained in Cynthiana because it was a “special place” to him. He had trouble in school himself, especially in 6th grade. After earning two degrees, he decided to return to help others through similar problems. 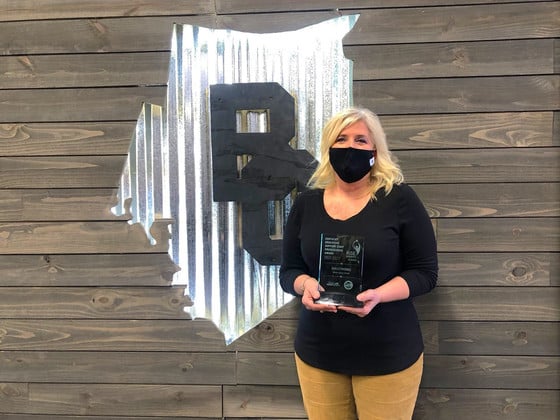 Thomas has been youth service center coordinator at Barren County High School since 2017, where she works with local agencies to help students and their families.

When a freshman was diagnosed with cancer, Thomas helped the student’s family during treatment and for months after the student lost their battle with cancer, Matthews said.

She helped a single mother leave domestic violence, finding a hotel room and offering to pick up the woman’s daughter on an hour’s notice, then helped her get housing through a local agency the next day.

She also helped a mother seeking to regain custody of her children after time in rehab when a judge referred the woman to Thomas. Thomas helped the mother find a job and housing, worked with the woman’s counselor and met with the woman’s children, Matthews said.

“She helped put this broken family back together,” Matthews said.

Thomas credited the school district with supporting her work, and said many others work alongside her.

She said her job is about building relationships and helping people consistently, not just in occasional crises.

“My prayer every morning is exactly the same: ‘God, give me the grace and the wisdom to love like you love, and to serve with joy in my heart,’” Thomas said.

Kentucky schools depend on more than buildings and teachers, Gov. Beshear said.

“Your work matters,” he said to classified staff, noting that his state budget proposal includes a $1,000 salary increase for school employees and full funding of their retirement system.

During the two-week nomination period in October 2020, the Kentucky Department of Education (KDE) received 96 nominations for the KESSP Award. Thomas and Walker were chosen by a committee of key education stakeholders.

Choosing between the many outstanding nominees was difficult, said Lt. Gov. Coleman, herself an educator. Kentucky schools could not function without the work of dedicated classified support staff, she said.