HARRISON COUNTY, Ky. (WTVQ) – The Harrison County School District has released the high school senior picture for the Class of 2020.

To the naked eye, it may look like a traditional class photo but the special masterpiece was made with loving hands and technology.

The post on Facebook reads, “2020 HCHS SENIORS! Look what’s ready! Come to the high school’s front office beginning August 3 from 9 a.m.-3 p.m. You’ll get a DVD, your individual picture and the group photo of the class of 2020 (and it’s AMAZING)!”

It was a surprise to seniors.

Harrison County High School Assistant Principal Jenny Nichols, tells ABC 36 it started as a conversation about how to carry out a tradition with regards to the graduation ceremonies. The conversation was then taken to Donald Richie, the media tech for the district.
Nichols says, “We graduated each senior individually. They were assigned in 15-minute intervals. They were allowed to bring 6 guests each. They marched across the stage to Pomp and Circumstance, they were announced and they picked up their diploma on a table and Donald Richie took a photo of them, standing there with their diploma. We then asked them to step off to the side and stand in front of a green screen.”
Nichols says Richie photographed each senior in front of a green screen and then, “spent endless hours editing and layering the student images.” She added, “It’s been great giving them this momento in a time when it wasn’t possible to physically bring them together. It feels so good to be able to do this!”

“The one thing that we could not give them that they coveted the most is being together and this photo at least gives them a chance to have that closure, that yes, we are still the class of 2020 even if our process was just a little different,” says principal Steven Fowler.

The photo was just part of the district and school’s effort to make seniors feel special, even during a pandemic.

They made yard signs for every senior, held a parade, a virtual awards ceremony, and gave out graduation gifts. 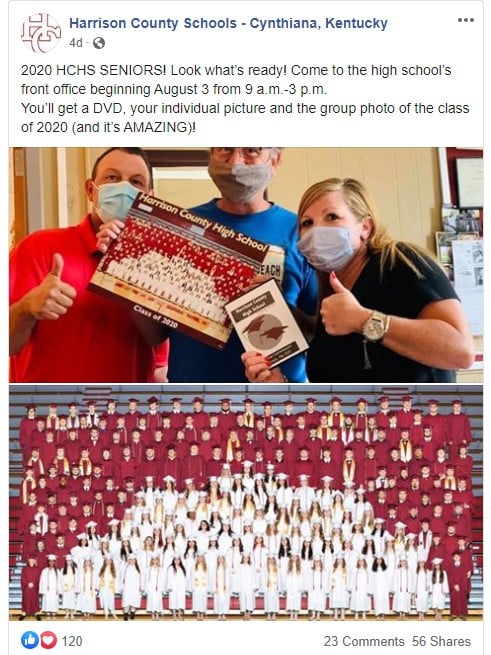