41-year old Amanda Brock, of Coldiron in Harlan County, was wanted on manslaughter and wanton endangerment charges, according to KSP.

In late April 2018, she was arrested and charged after investigators say she left her 11-year old son to babysit her 3-year old nephew while she went to watch go-cart races in Letcher County.

KSP says while Brock was gone, her home caught fire.  Her son escaped and ran to the neighbor’s for help, but her nephew died in the fire, according to State Police.

HARLAN COUNTY, Ky. (WTVQ) – A toddler is dead and his aunt is in jail after a fire in Harlan’s Coldiron community.

According to Kentucky State Police, Amanda Brock, 37, left her 3-year-old nephew and her 11-year-old son home alone on Friday evening.

The home, according to state police, caught fire just before 9 Saturday night. They say the 11-year-old went to tell a neighbor, but by the time anyone got back to the house, it was destroyed.

Firefighters found the 3-year-old dead inside the home.

Brock was arrested and is charged with second degree manslaughter and wanton endangerment.

The cause of the fire is still under investigation. 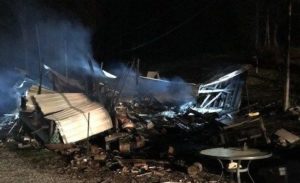