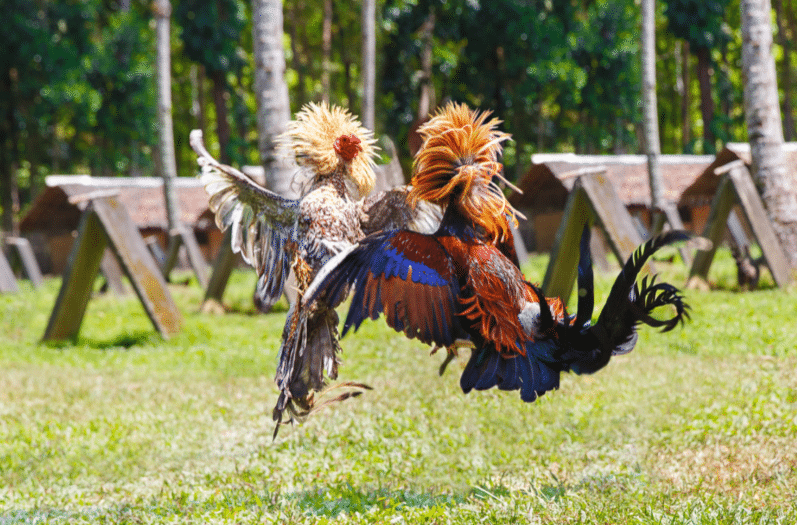 who are at the center of a multi-million dollar global cockfighting industry that goes largely untouched despite a strict federal law that gives law enforcement tools to go after them.

But two animal rights groups that focuses on dog- and cockfighting hope information it has provided will spur the U.S. attorneys in Kentucky to launch investigations and take action.

Meanwhile, a state senator plans to introduce legislation he hopes, along with increased publicity, will give local law enforcement the momentum needed to crack down rather than turning a blind eye.

During a press conference Thursday afternoon, the Animal Wellness Action and the Animal Wellness Foundation asked U.S. Attorneys Robert M. Duncan and Russell Coleman, respectively covering the Eastern and Western Districts of Kentucky, to investigate allegations the seven Kentucky residents appear to be deeply involved in
illegal trafficking of fighting animals, with most of them sending birds to far-flung
destinations across the world including the Philippines, Mexico, and Honduras.

During the same press conference, state Sen. Morgan McGarvey, a Louisville Democrat and Senate minority leader, said he will introduce legislation to make fighting and breeding fighting roosters a felony in the state. Related activities also would be illegal, he said.

“Kentucky is at the center of the American and global cockfighting industry, with major
operators shipping birds all over the world” said Wayne Pacelle, president of Animal
Wellness Action. ”We have amassed an abundance of evidence to demonstrate these
individuals are almost certainly violating federal law.

A detailed report covering the findings of the investigation points to apparent illegal
animal fighting activities by seven individuals, including farms in Manchester, Carlisle, Smithfield, Bowling Green, Boston, and Columbia.

When a television crew from a Philippines network that focuses on the widespread cockfighting in that country came to Kentucky, breeders told their story, Pacelle said.

“The striking images of poultry that decorate the stairways and hallways are a nod to Ron’s hobby – he breeds fighting cocks. And although this throwback to the pre-Civil War South is now banned in the US, his birds find a welcome home in the Philippines where they fetch a good price,” one interviewer said in introducing one of the breeders to his audience, according to the animal rights advocates.

“Kentucky has emerged as a hub,” Pacelle stated, noting other big exporting and cockfighting states include Tennessee, Alabama, and Oklahoma.

The birds sell for $200 to $500 each and the Phillipines even hosts a world championship. A Kentucky breeder finished second there in recent years.

“These folks think they can operate with impunity,” Pacelle said.

“What this is really all about is profit, money…the best way to prevent it is to take away the profit, get citizen participation to help do it,” Gorman observed.

Possessing and shipping birds for cockfighting have been banned under federal law since 2002 and has been a felony since 2007, when President George W. Bush signed the enhanced penalty provisions into law and also criminalized the sale of cockfighting implements.

“There has been legal confusion about Kentucky dating back to my time as Kentucky
Attorney General,” said Chris Gorman, who served as the Democrat AG between
1992 and 1996. “Cockfighting is a bloody and barbaric practice, and state law should
align with the federal government’s tough policies on this form of animal cruelty.”

“This is a major criminal activity…we are talking millions and millions of dollars,” Gorman said during the press conference.

The Philippines-based cockfighting broadcast company, known as BNTV, came
to the United States, with its hosts and production crew and visited 50 or so major
cockfighting farms. During this U.S gamefarm tour, they produced and broadcast
dozens of incriminating videos.

With seven videos, Kentucky was second only to Oklahoma in the number of game fowl farms visited.

“These videos, combined with other evidence we’ve compiled, makes it apparent that
these individuals are deeply involved in the cockfighting industry,” said Marty Irby, executive director of Animal Wellness Action and former agricultural policy advisor for long-time former Congressman Ed Whitfield, R-Ky. “Law enforcement should put a stop to their lawbreaking and animal cruelty without delay.”

While federal law bans animal fighting anywhere in the U.S. and a range of associated activities, including transporting animals for fights elsewhere, Kentucky law is anemic. It
wasn’t until 1974 that the Kentucky General Assembly passed an animal cruelty law that
made cockfighting a misdemeanor.

But just a few years ago, “under the ruse that a weakening of the law was necessary to deal with a blackbird infestation in Western Kentucky, fowl was omitted from the definition of “animal” in the cruelty law, effectively legalizing cockfighting,” according to the Courier Journal.

There was dispute about whether Governor John Y. Brown’s veto of the measure was timely, and that further muddled the legal status of cockfighting.

Kentucky is one of only eight states where it is a misdemeanor. It’s a felony in the other 42.

In 2014, in his failed attempt to unseat Senate Majority Leader Mitch McConnell in the Republican primary in Kentucky, former Governor Matt Bevin attended a rally of cockfighters, the groups noted in a press release.

He apparently thought he had an opening on this subject because McConnell had supported a provision in the Farm bill to make it a crime to attend or bring a minor to an animal fighting venture. Bevin later claimed not to understand that the people assembled at the venue were cockfighters and he disavowed any support for cockfighting, Pacelle said, noting that during his four-year term, Bevin took no actions to strengthen the law against cockfighting.