LEXINGTON, Ky. (WTVQ) – Governor Andy Beshear is speaking out about the protests in Louisville over the shooting death of Breonna Taylor.

In an interview with CNN, Beshear said, “Louisville is a city I called my home for 15 years before winning this office and moving my family to Frankfort. It is a special place but it’s also a place where you can see very easily what hundred years of slavery, of segregation, of Jim Crow has done to a city.”

Protesters gathered Thursday night in Louisville, after the city’s mayor released the 911 calls from the night the 26-year-old EMT was shot and killed. According to Louisville Metro Police, multiple people were shot during the protest.

Gov. Beshear said he believes what we have seen is in response to, “a very concerning shooting of an EMT, a young woman who worked to save the lives of others here in Kentucky. But it’s also, in a broader context, we’re fighting a worldwide pandemic that’s disproprtionately taken the lives of black and African American individuals particularly in that city.”

“Last nights events started as a very peaceful protest, one where those out there were seeking justice, and it was actually one of the most compliant protests with the CDC that we’ve seen. And then I believe some other folks, very late, more than 3 hours in, came in and ultimately instigated and caused some actions that turned into something that it should not have been,” added Gov. Beshear.

“Breonna devoted her own life to saving other lives, to helping others, to making people smile and to bringing people together. The last thing she’d want right now is any more violence. Changes are being made but its not enough. We will not stop until there is truth, justice and accountability. Breonna’s legacy will not be forgotten and it’s because of all of us saying her name demanding justice. We are saying her name more each day, thank you. Please keep saying her name. Please keep demanding justice and accountablity but let’s do it the right way without hurting each other. We can and we will make some real change here, now is the time, let’s make it happen but safely.” 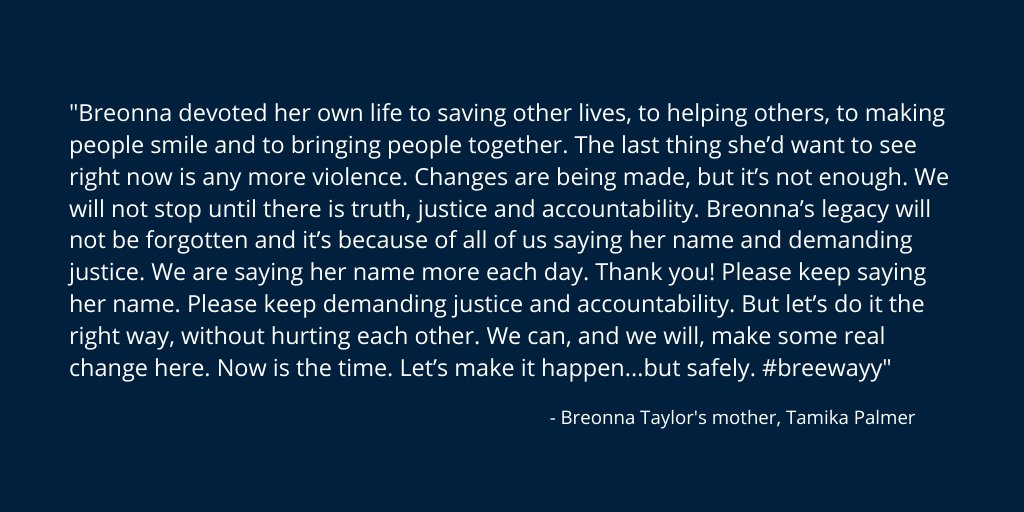