From Lawrenceburg to Mt. Sterling and Ravenna, Guardsmen talk duty during Louisville protests

LOUISVILLE, Ky. – “Usually, we roll in and violent protesters kind of roll out. But tonight 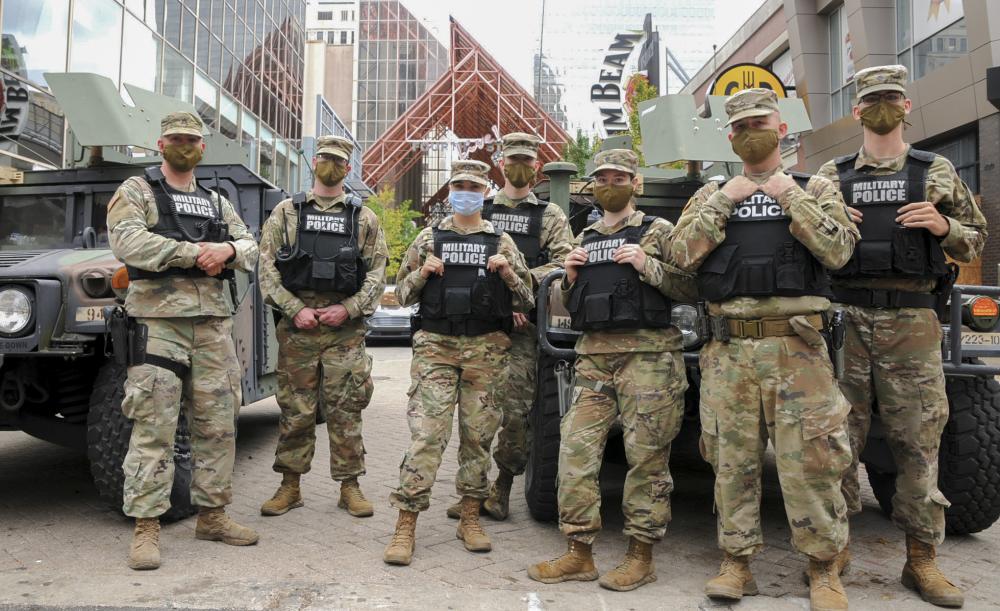 may be different,” said Lt. Col. P. J. Burnett from Unit One of the Kentucky State Police.

Kentucky National Guard’s 1st Battalion, 149th Infantry, also known as the “Mountain Warriors,” augmented units from the KSP and Louisville Metro Police Department Saturday, Sept. 26, in an effort that may have saved lives by deterring an unlawful standoff at Jefferson Square Park. 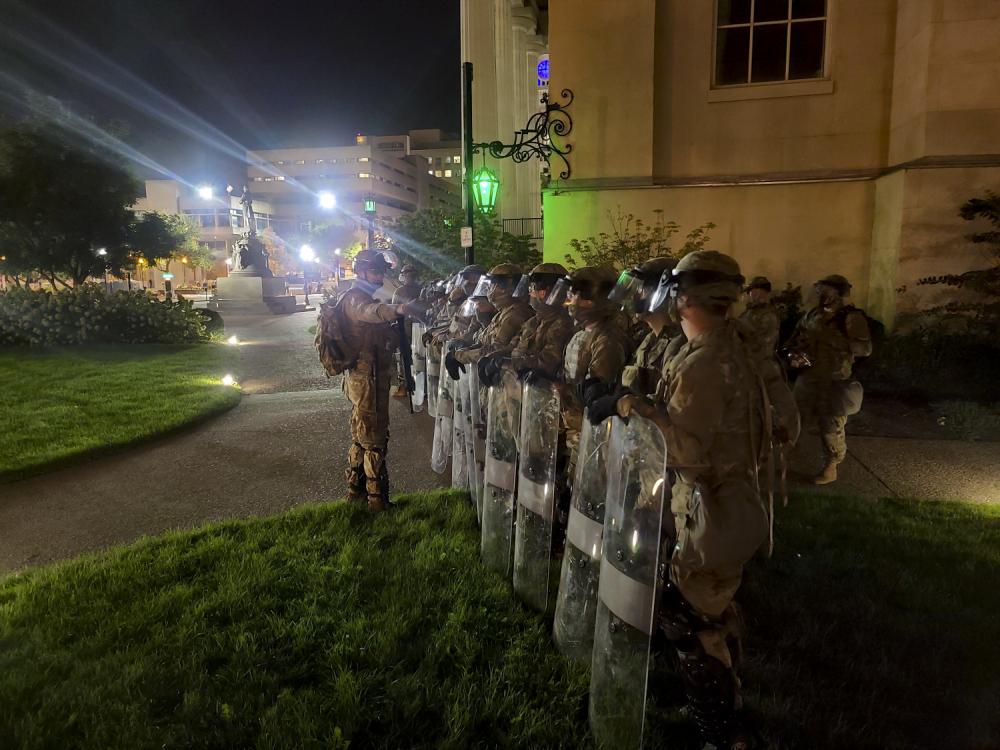 curfew, and some have used plywood as shields and weapons to bait the LMPD into a fight. They also have set things on fire. We need more shields out there tonight,” said Burnett during a joint-mission rehearsal with KSP, LMPD, and the Kentucky Guard Sept. 26.

The Mountain Warriors were activated with the 138th Field Artillery Brigade. Their purpose was to augment the LMPD and protect against violence and damage at more than 20 locations. Overall command and control of Guard 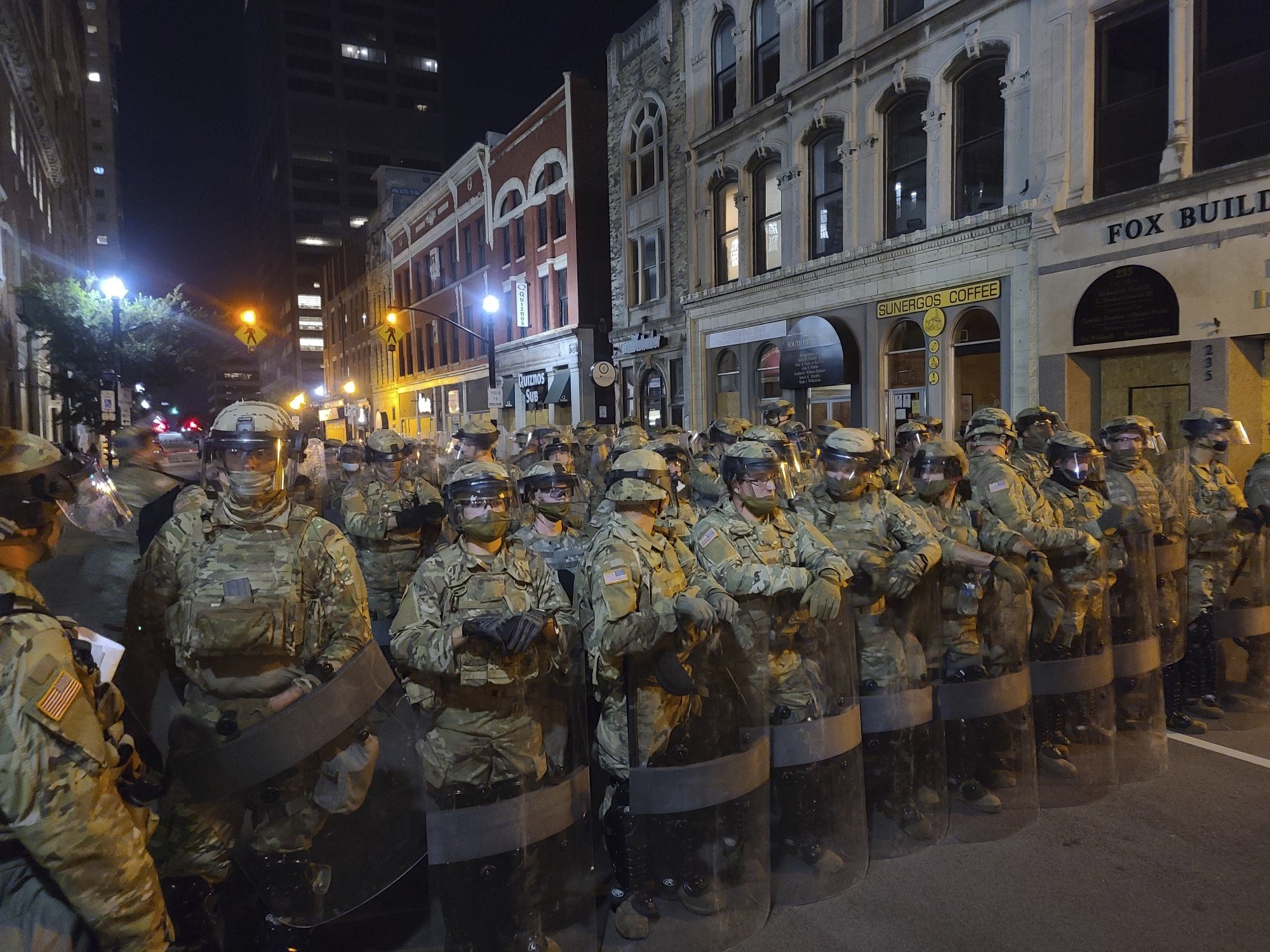 Violence in the city escalated after the Kentucky Attorney General’s announcement that no LMPD officers were being indicted with murder charges for their involvement in the death of a Louisville citizen, Breonna Taylor. Violent activists 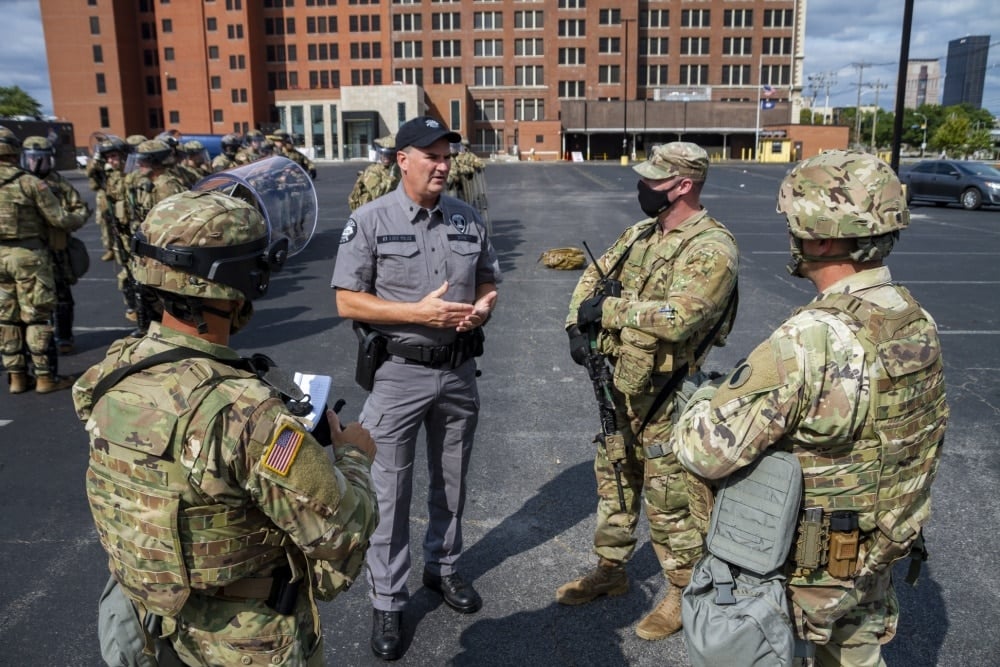 With tensions on the rise, the KSP and Kentucky Guard stood by, ready to protect and serve the city if needed.

“I am guessing people don’t realize how hard it has been on the LMPD,” said Penn. “They have been running extended operations or overtime at a very high tempo for months. No matter what line of business you’re in, if you do that for long enough, you’re going to run into some fatigue. I believe our presence aided in the safety and the security of the police
force there, too.”

The National Guard mission differs from the Reserves or active military because it supports both federal and state missions. The civil support mission is a state active duty call-up.

“Most of our time focuses on our federal mission as part of an Infantry Brigade Combat Team. As Infantry, we train to close with and destroy the enemy,” said Penn, who has served more than 17 years as an Infantry officer. “It takes a complete paradigm shift to get our Soldiers to focus on civil support. But I think it’s a challenge we answered because of the success of our operations.”

Charlie Company commander, Capt. Thomas Czartorski, staged his Ravenna-based Infantry unit with the KSP earlier that day and conducted training rehearsals that would prepare them if they received the call from LMPD to move Troops into downtown.

“We did not want to go downtown that night, but we had to prepare ourselves for the worst. Civil support is a tricky mission that many people don’t understand,” said Czartorski, who also works as a State Trooper in the Kentucky State Police.

“We readied our vehicles and staged them with the KSP to respond quickly together,” he said. “We conducted rehearsals with our pro-masks on and practiced how to move as a unit while wearing riot gear. We don’t train for this stuff often, so we learned a lot. We did some drills repeatedly, just to make sure everyone understood what to do. Then, I waited for the call that I hoped would never come.”

At approximately 8:00 p.m., personal cell phones in the area rang in alarm with the emergency broadcast beacon asking citizens to make their way home, peacefully, before the city’s upcoming curfew at 9:00 p.m.

Another broadcast repeated its warning at 8:30 p.m.

Some people walking the streets complied, and some did not. According to many Livestream broadcasters and eye-witnesses, loudspeakers from within the protest group echoed words encouraging people to stay and fight the police while they came to enforce the 9:00 p.m. curfew. Some people within the crowd held plywood to be used as shields.

Lawful lines had been crossed, and the call to support officers near Jefferson Square Park came. The Mountain Warriors and the KSP, armed with batons, shields, and riot gear, loaded into buses and personnel carriers at approximately 8:38 p.m.

“This was the first time I had ever been involved in any conflict for the military,” said Spc. Jorgan Perez, a full-time EKU student from Mt. Sterling, who served as a squad leader for the mission. “I had never even been in a convoy before then.”

“Once we dismounted the LMTV [light medium tactical vehicle] on Market Street, an LMPD officer pointed for us to go toward Jefferson Street. We saw media and protesters walking by. Protesters shouted and taunted us, calling us names. It made me realize this [event] was real, and I was in it. The sudden change in the atmosphere put me in a zone, and I knew I had to step up and keep my cool. Leadership put my squad at the front of the company.”

Various special program units were there, including LMPD SWAT and officers mounted on horseback. The KSP brought approximately 80 Troopers, and the Guard had more than 60 Soldiers.

“I and Col. Bates were on the ground with Soldiers at the time and didn’t get the operational view of everything,” Penn said. “But from on the ground, the 9 o’clock curfew began, and we didn’t see anybody. We thought the operation was not a success. But according to the LMPD operations manager, as soon as we got out of our vehicles, the violent protesters and rioters moved out. They quickly dispersed rather than staying to start a fight or trying to burn down the city.”

The Kentucky Guard and KSP’s presence deterred a group of violent individuals that planned to wreak havoc on the local police force and the streets of downtown Louisville. The city was saved for the moment, and a turning point had begun.

“There’s a fine line too,” added the battalion commander. “It is our job in the military to remain apolitical. The military is an organization that provides a safe harbor for everyone. When we are doing a show of force, we really aim to protect the lives of the civilian populace. And people sometimes misinterpret that. But the goal for everything we do is to protect life.”

“The people of the city of Louisville were in trouble. They were in need. And, in talking to the Soldiers before we got there, I asked them, ‘If we don’t help the city, who will? We are citizens of the Commonwealth of Kentucky, and we have Soldiers that live in the city of Louisville. Who better to help provide for the safety and protection of the local people?’ We took it as a personal responsibility. Our service that night provided our city with a sense of safety and a sense of security and may have saved lives. We were glad to be there. We were happy to go home,” said Penn.

For Spc. Aaron Moss, his experience as a police officer in Anderson County made him proud to be a Guardsman and out front with the KSP.

“I work with KSP a lot during my civilian job,” said Moss, a team leader in Charlie Company. “I trusted working with them, and I was confident we would come home safe that night. And we did. Some protesters walked by and screamed at us the next day, calling us hateful names, but it was not all bad. A group of four walked up and asked to pray with us. They prayed and thanked God for the safety of everyone out that [Saturday]
night, and that following night, then thanked me for my service and gave me a cross pendant as a keepsake. I still keep it in my pocket to remind me of those I protect and serve each day.”