LEXINGTON, Ky. (WTVQ) – According to the Fraternal Order of Police…from April to December of last year…the Lexington Police Department’s response times from initial call to arrival, averaged from 9 to nearly 13 minutes.

The FOP says this year those times have increased from April to July, with the longest response time just shy of 15 minutes. 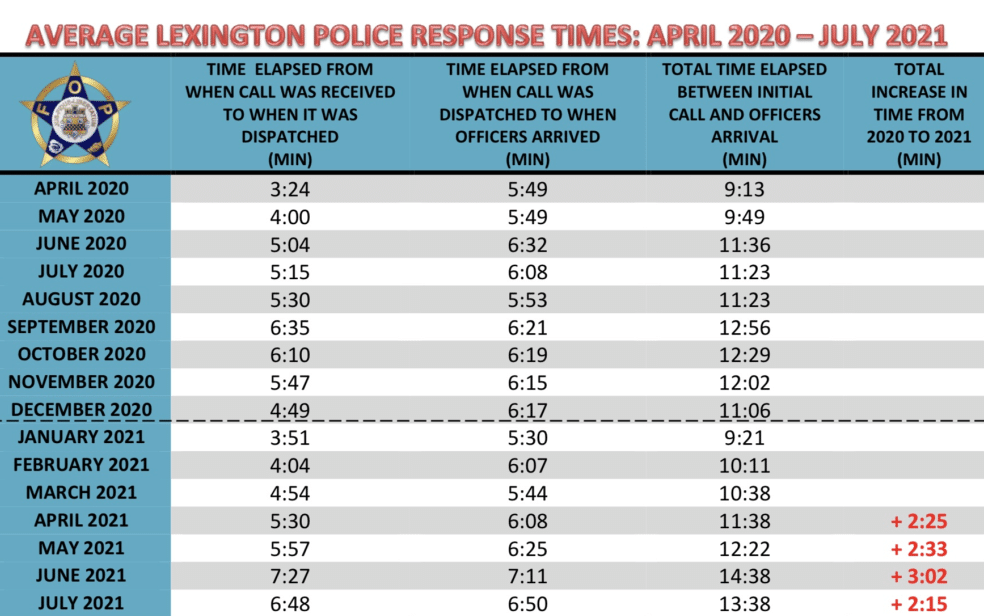 From: Fraternal Order of Police

“If something is going on that is a safety issue, two to three minutes makes a huge difference it could be the difference between life and death” said FOP President, Jeremy Russell.

Russell says response times have been impacted by an increase in violent crime.

Russell also says its impacted because of an officer shortage. He says last week 20 officers had to respond to the pavilion downtown for a disturbance, leaving only two officers on the third shift available for any other calls.

“The calls with violent crimes utilize a lot more officers to secure the scene, interview witnesses, stay with suspects, victims, witnesses, whereas a standard report call you can use one officer with that” said Russell.

He says the officer shortage is due to a lack of support from the city and community.

During a safety forum on Wednesday with the Mayor…Police Chief Weathers said there are currently 65 vacancies in the department, counting the current recruit class.

“With our recruit classes were trying to get back to our full strength” said Mayor Linda Gorton.

But Russell says there’s more vacancies than that, that the current recruit class shouldn’t count as they are not sworn officers yet. He says without that count, there are 99 vacancies.

“You can throw money at anything, you can hire, try to hire as many people as you want, but without the support and proper environment, it doesn’t make any difference”