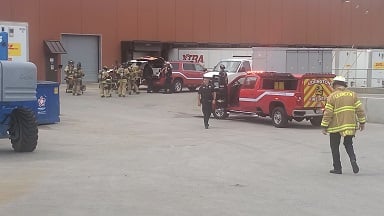 quickly put out a fire today at the J.M. Smucker facility on Winchester Road.

according to Lexington Fire Battalion Chief Jordan Saas, firefighters responded to the report of a fire at about noon at the facility. Crews found smoke coming from the roof on the backside of the building and once on top, fire was discovered in one of the hoppers.

The fire was extinguished using a hose line and the building’s sprinkler system, Saas said.

As of 1 p.m., crews remained on the scene checking for hotspots but the scene was turned back over the company at about 1:15 p.m.

Street resurfacing to begin on Edgewood Drive in Nicholasville