MOUNT VERNON, Ky. (WTVQ) – One day after the start of wildfire season and already the fires are spreading, fueled by high winds.

In Montgomery County, fire crews fought a fire near Old Highway 11 in Jeffersonville. According to Montgomery County Emergency Management, the fire was more than 90% contained Wednesday night. It says the public was not at risk.

In Rockcastle County, there was a wildfire the Kentucky Department of Forestry estimates covered 50-60 acres. The Mount Vernon Fire Department says the fire is now 80% contained.

“During the day, everybody has other jobs and that’s the reason you have to call on other fire departments to come and help,” says Mt. Vernon Fire Chief David Bales. “We had firetrucks stationed at three different houses to protect them so no one was evacuated or no danger.”

Mt. Vernon Fire says the strong winds knocked two power lines into each other which caused them to short. Then shorted wires caught onto a telephone pole that caught fire. Fire crews expect there will be some smoldering and trees on fire within the contained area for a while.

“You can’t put them out. You would have to have a lot of man power and a lot of time to put it totally out,” says Bales.

The forest fire currently burning in Mount Vernon from Sand Springs Road to White Rock Road is now 80% contained, according to the Mount Vernon Fire Department.

The department reports no damage to any structures. According to Jackson Energy, more than 500 members were without power due to the fire in Rockcastle County. 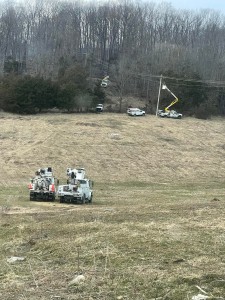 MOUNT VERNON, Ky. (WTVQ) – Several fire crews are on the scene of a forest fire in Mount Vernon, right as the spring wildfire season begins.

According to the Mount Vernon Fire Deparment, “Mount Vernon, Climax, and Kentucky Division of Forestry fire crews are currently on scene of a forest fire off of Sand Springs Road. Any smoke seen in town or the Sand Springs area is from this fire.”

The spring wildfire season has begun in Kentucky, which means burning restrictions are in effect across the state.

Burning is prohibited between the hours of 6 a.m. and 6 p.m. within 150 feet of any woodland or brushland through April 30, according to a statement from the Kentucky Energy and Environment Cabinet.

Officials urge anyone burning debris during the wildfire season to use caution. The Kentucky Division of Forestry has responded to 93 wildland fires since Jan. 1 and many have been attributed to debris burning, according to the statement.

“Informed decisions about outdoor burning increases the safety of our firefighters and our communities,” Division of Forestry Director Brandon Howard said.