LEXINGTON, Ky. (WTVQ) – A 44-year-old Woodford County man told UK Police officers they “weren’t the ones he had a problem with” and that he could provide information on “murders” and “drug rings” after he was arrested March 25 with explosives and weapons in his car outside the UK Chandler Hospital emergency room.

Fayette County District Judge John Tackett declined to reduce Bryan Carroll’s $150,000 bond following a preliminary hearing Thursday morning. The judge forwarded the charges, which include possession of a handgun and possession of a weapon by a convicted felon, use of weapons of mass destruction, and drug charges, to the Fayette County Grand Jury.

During that hearing, UK Police Det. John Harder detailed the circumstances leading up to and Carroll’s actual arrest during a frantic scuffle outside the emergency room and the items found in Carroll’s car after he was in custody.

That include six handguns and two assault rifles — an AK-47 and AR-15 — and four explosive devices that were “live” and a fifth that wasn’t ready for use.

One of those included a small “mortar-like” device that was meant to be lit by a fuse and thrown, Harder told the judge. That devise was found in a puch, either in a tactical belt or tactical vest found in Carroll’s car.

A pipe bomb didn’t have a charge in it, the officer testified.

“He said he could give us bigger info,” Harder said of the relatively brief conversations he and other officers involved in the arrest had with Carroll, but that Carroll said he needed to talk to agents with more authority.

“He said he knew we were not the ones, the police officers he had a problem with,” Harder continued, noting he was not sure whether Carroll was referring to Versailles Police, who have arrested Carroll, numerous times in more than a decade, or someone with “some other group he’s involved with.”

Harder said the FBI talked extensively with Carroll and Tackett acknowledged more federal charges are likely “coming down the pipeline.”

In pushing for a lower bond, Mincy noted the charges are only classified as Class C felonies, Carroll is a native of the area and has family nearby. Any while Carroll previously completed a probation program that involved wearing an ankle monitor, he also has had a problem with keeping an ankle monitor on in the past.

In the end, Tackett called Carroll a “significant danger to the community,” a “high risk as a flight risk,” and a “high risk of reoffending” and left the bond unchanged.

“The bond is properly set,” the judge stated.

VERSAILLES, KY. (WTVQ) – With the street where Carroll lives shut down and nearby residents evacuated for safety because of the potential of explosives, residents said the controlled explosions made it all a little too close to home.

“We ride our bikes on the bike path right in front of his house almost on a daily basis. It’s really concerning how safe we are in society,” said neighbor Jared Maylan.

Carroll is facing several state and federal charges, including one related to having a weapon of mass destruction, being a convicted felon in possession of a handgun, and resisting arrest to name a few.

While he’s in custody, neighbors say their peaceful little street is now chaotic, making them want to sleep with one eye open.

“I think right now we are all processing the shock that’s occurred,” says Mayan. 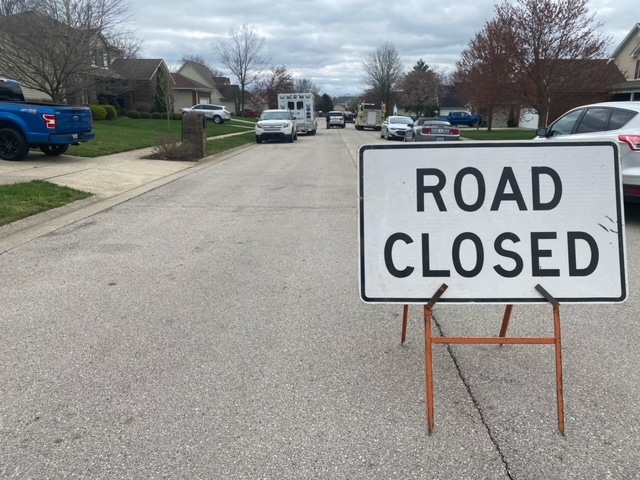 Versailles, and state officers continue to block a stretch of Aberdeen in front of Bryan Carroll’s home at 218 Aberdeen Road in Versailles.

Agents started searching the home Thursday after explosives were found in his car outside the UK Hospital emergency room. Friday morning, agents after periodically been detonating explosives at his residence.

LEXINGTON, Ky. (WTVQ) – The Versailles man charged with a variety of weapons and 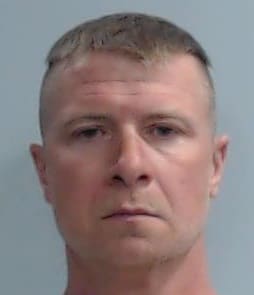 explosives offenses following an incident Thursday morning at the University of Kentucky Chandler Medical Center was with his father at the time, according to arrest records (Carroll, Bryan T – Citation (1)).

UK Police had been alerted that Bryan Carroll (carroll federal affidavit) was a convicted felon, was dangerous and was wanted on new charges when they went to the hospital looking for him just before 10 a.m. Thursday.

When Carroll was confronted by the three officers, he tried to run around and get in his car, where his father was sitting, according to arrest affidavits. Two officers were able to “grab ahold of him” and “assisted him to the ground.” He continued to “struggle” before officers were able to get him handcuffed, Officer J. Harder wrote in the affidavit.

The officers found two handguns in his waistband and inside the car, found two long guns and a “large amount of ammunition” in the rear seat. They also saw a “suspicious looking item made of paper and tape which resembled an improvised explosive device.”

The officers stopped their search and called in Lexington Police and Fire teams, which began the four-hour shutdown of the nearby areas. Eventually the search found three other handguns and four explosive devices.

The weapons in his wasitband were a Smith and Wesson Bodyguard, .380ACP pistol, and a Kahr Model PM9, 9mm pistol, according to an arrest affidavits signed by ATF agent Christopher Knotts charged Carroll with possession of a weapon by a convicted felon.

His bond is set at $150,000, according to Fayette County Detention Center records. No appearance date or bond has been set in the federal weapons charge, according to federal court records.

LEXINGTON, Ky. (WTVQ) — The charges lodged Thursday against 44-year-old Bryan Thomas Carroll following the incident at the UK Chandler Hospital may say something about why local, state and federal law enforcement and firefighters took the case so seriously.

Carroll is charged with 10 counts related to weapons or explosives, including five counts of possession of a handgun by a convicted felon, four counts of use of weapons of mass destruction, apparently for the explosives found in his car, and one count of carrying weapons on school property.

Police have not said what kinds of handguns were seized or the nature of the explosives but when alerting UK and Lexington authorities about Carroll being on his way to the hospital, Versailles Police warned he could be “armed and dangerous.”

LEXINGTON, Ky. (WTVQ) — A suspicious incident at about 11 a.m. Thursday prompted a broad shutdown around the UK Chandler Hospital Emergency Room, brought in dozens of local, state and federal law enforcement and firefighters and landed a Versailles man in jail.

An incident outside University of Kentucky Chandler Hospital’s Emergency Department prompted UK Police, the FBI, the Bureau of Alcohol, Tobacco and Firearms, Lexington Police and the Lexington Fire Department to investigate.

University of Kentucky Police Chief Joe Monroe said earlier in the day Versailles Police contacted UK police about a man thought to be armed and dangerous visiting a family member in Chandler Hospital. Patients being brought to UK were diverted to the nearby VA facility or to Baptist Healthcare Lexington or CHI Saint Joseph.

After using video security on campus to determine the man was on site, UK Police arrested him without incident as he was leaving the hospital. The suspect, Bryan Carroll, 44, of Versailles, was taken into custody where it was determined that he was in possession of firearms, body armor and what police believe were two explosive devices.

According to his LinkedIn account, Carroll owns BTC Drystone in Woodford County and has for more than 16 years, doing everything from building or repairing stone fences to making custom stone mailboxes, counters and other products.

He also has a history of domestic violence-related offenses dating back to at least 2009 in Versailles. According to the domestic violence registry, he was arrested three times in 2009 — April 30, Aug. 17 and Sept. 13 — on fourth-degree domestic assault charges.

According to Fayette County Detention Center records, he was arrested in Fayette County almost 21 years ago on March 28, 2000 on unspecified charges.

UK Police at that time called in its partner federal law enforcement agencies.

As a safety precaution, the Emergency Department lobby area of the hospital was secured; Nicholasville Road/South Limestone outside the hospital was closed to traffic; UK issued a UK Alert to the campus community urging them to avoid the area; and law enforcement officials searched the area and Carroll’s vehicle where they found the explosive devices.

No injuries occurred in the incident and Monroe said at no time was anyone in danger.

As for more than three hours of patient diversions, Baptist and CHI Saint Joseph said they weren’t overloaded.

Ruth Ann Childers, a spokesperson for Baptist, said the city’s hospitals practice for such scenarios.

“I checked with our ER director. We did not a big surge of patients that created an overload in the ER, though we were pretty busy today,” Branham said.

A witness told WTVQ ABC 36 News the man “seemed like a normal guy” and because he was wearing what appeared to be a security guard’s shirt, the witness wasn’t alarmed about the bullet-proof vest he was wearing because the witness thought he might have come from work.

According to the witness, the Versailles police followed him there to arrest him for having multiple arrest warrants.

Witnesses expressed some concern because Carroll’s car in which agents found explosives was parked near the emergency room entrance door so if explosives had gone off, people could have been injured.

“Many, many people might have been hurt,” one witness told ABC 36 News.

LEXINGTON, Ky. (WTVQ) – The FBI and ATF were called-in after a suspicious package or device was reported outside the emergency room at UK Chandler Hospital late Thursday morning.

According to a source inside UK Hospital ER, as a precaution, the main lobby of the ER was evacuated.  All ambulance services were told not to take any patients to UK ER, which is the only Level 1 trauma center in central and eastern Kentucky.

The area was blocked off to traffic.  Nicholasville Road/South Limestone was closed to traffic both northbound and southbound between Cooper/Waller Drive and Virginia Avenue/Huguelet Drive in the vicinity of UK Hospital.

The Lexington Fire Department was also called to the scene along with University of Kentucky Police.

Officers in bomb suits were seen leaving the buildingand a disposal robot was on the scene, according to the Kentucky Kernel student newspaper. 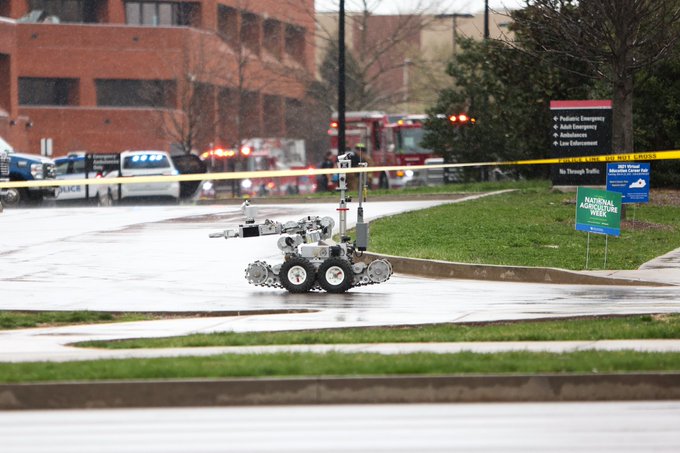 Police use bomb detection device to check car and scene at UK Hospital.

UK sent out an alert late Thursday morning telling people to avoid the area.  People in other areas of campus were told they could “resume all other activities.”

The school says the coronavirus vaccination clinic at Kroger Field was not impacted and operations continued as scheduled, but there could be traffic delays in the area.

For the latest updates and alerts from UK, click here.

Keep it here https://www.wtvq.com/ for updates.