Friday, Dorcas was reunited with owners David and Elizabeth Fleming.

FRANKFORT, Ky. (WTVQ) – Vietnam veteran David Fleming is celebrating a reunion with a very important family member: his service dog, who ran away on Tuesday.

The Versailles, Indiana native says he and his dog Dorcas, who helps him manage his post-traumatic stress disorder, share a special bond.

“She loves me. I have seven dogs, they tolerate me, but this dog loves me, sleeps on my bed, by my pillow, every night. She loves me,” said Fleming.

But over the past few nights, Fleming says he hadn’t been able to sleep.

“I hadn’t been able to sleep, I’ve been praying day, all night. I wanted an angel to come down and bring her to safety. And they did,” said Fleming.

Tuesday, Fleming says his truck broke down on Versailles Road in Frankfort, and Dorcas took off during the night. Fleming was driving from Chicago and says he doesn’t remember why he drove to Frankfort, but says the episode is related to his PTSD.

“Somehow I drove down here, I don’t know why. My truck broke down, it was four below zero. I had a coat and she had a coat. I got out to walk her. She sat down, I thought, ‘oh, she’ll catch up to me,’ she took off,” said Fleming.

Since Tuesday, he has been seeking medical treatment for the episode, according to his wife, Elizabeth Fleming. She says the past couple days without Dorcas have been extremely difficult.

“This has been a traumatic experience. I’m sure traumatic for her too because she’s at home with us all the time and she’s spoiled,” said Elizabeth Fleming.

Throughout the Frankfort community, word of the missing canine spread fast, with people quickly getting in on the search, posting photos and comments of sightings on social media over the past several days.

Friday, Frankfort Police, along with Franklin County Animal Control and about seven volunteers from the community and Franklin County Humane Society tracked Dorcas for six miles, and finally found her on Hanley Lane, just off of I-64. According to volunteers, the snow made it easier to find Dorcas, and the search party tracked her through her snow prints and leash dragging on the ground.

“It’s awesome, it’s amazing, this is what we’re supposed to do for our community. We had a member, though he wasn’t a member of our community, he had a need and we were able to help. It’s amazing to see Dorcas reunited with her family,” said Frankfort Police Chief Dustin Bowman.

Fleming’s 1999 maroon Ford F-350 truck, which also was missing, was found on Thursday. The Fleming family is now headed back to Indiana.

UPDATE (1/28/22)- Missing K9 Dorkus has been found, according to the Frankfort Police Department.

Police say she’s been reunited with her family, who reported her missing on Tuesday. 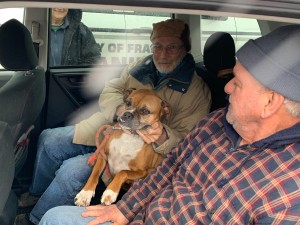 UPDATE (1/27/22) – A vehicle authorities were looking for in connection to a missing service dog has been found but the K9 is still missing.

According to Frankfort police, tips from the public led to the missing F350 dually pickup truck.

Police say the department has now teamed up with the Franklin County Humane Society to find K9 Dorkus, “We utilized searches of surrounding areas of the last known locations. Drones were utilized during efforts, but at this time K9 Dorkus is still missing.”

Frankfort police thanked the community for taking part in search efforts and providing tips that led to the location of the truck but want the public to remain diligent, “The Frankfort Police Department is still requesting our community to keep looking for K9 Dorkus, and please contact us with any tips or information. Let’s work together in locating K9 Dorkus and getting her home safely.” 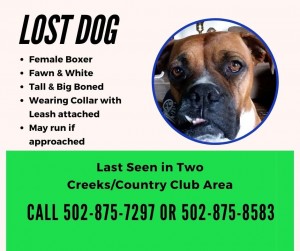 FRANKFORT, Ky. (WTVQ)- The Frankfort Police Department wants people to be on the lookout for a service dog belonging to an elderly veteran.

According to Frankfort police, officers found an elderly veteran off Versailles Road on Tuesday who is safe and waiting for family to get him back home. However, police say the man’s service K9 with him for his PTSD is now missing.
Police say the K9 is a boxer and was last seen wearing a red collar and leash in the Versailles Road near Country Lane and Cardinal area. Police are also trying to locate a 1999 maroon or brown Ford F350 Crew Cab Flat Bed Dually with Indiana tags possibly in the same area. Anyone with information on the service dog or the truck should contact dispatch at 502-875-8582. 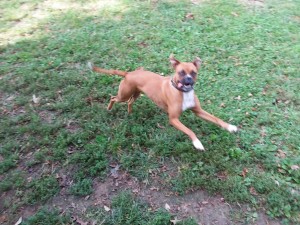 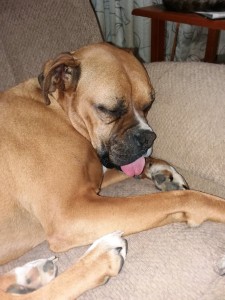