LOUISVILLE, KY (Tuesday, April 27, 2021) – Godolphin’s undefeated homebred Essential Quality has been installed as the 2-1 morning line favorite in a field of 20 3-year-olds for Saturday’s 147th running of the $3 million Kentucky Derby presented by Woodford Reserve (GI) with $1,860,000 going to the winner.

Trained by Louisville native Brad Cox, who never has saddled a Kentucky Derby starter, and to be ridden by Luis Saez, Essential Quality will attempt to become the first reigning juvenile champion since Nyquist in 2016 to win the Run for the Roses that highlights a 14-race program that begins at 10:30 a.m. (all times Eastern).

The Kentucky Derby will go as the day’s 12th race with a 6:57 p.m. post time. NBC will provide live coverage from 2:30-7:30 p.m.
Essential Quality is perfect in five starts in a career that began on Derby Day 2020 with a 4-length victory in a six-furlong maiden race at Churchill Downs on Sept. 5. Following that victory, Grade I victories followed in the Breeders’ Futurity and Breeders’ Cup Juvenile at Keeneland to cement the Eclipse Award for the son of Tapit.

In addition to Essential Quality, Cox will have one other runner in the starting gate: Juddmonte’s Mandaloun (15-1). Winner of the Risen Star (GII), Mandaloun will be ridden by regular pilot Florent Geroux and break from post seven.

Trained by John Sadler, Rock Your World has won all three of his starts with the first two coming on grass. Joel Rosario, who won the 2013 Kentucky Derby on Orb, has the mount Saturday and will break from post 15.
Third choice at 6-1 is St. Elias Stable’s Known Agenda.

Winner of the Florida Derby (GI) in his most recent start, Known Agenda is trained by Todd Pletcher who will be seeking his
third Kentucky Derby victory. Irad Ortiz Jr. has the mount and will break from post position one.

Pletcher will have three other runners in the gate: Calumet Farm’s Bourbonic (30-1), Repole Stable, Phipps Stable and St. Elias Stable’s Dynamic One (20-1), the 1-2 finishers in the Wood Memorial (GII), respectively, and WinStar Farm and CHC Inc.’s Sainthood (50-1). Kendrick Carmouche has the mount on Bourbonic and will break from post 20, Jose Ortiz will be aboard Dynamic One and break from post 11, and Corey Lanerie has the mount at Sainthood and exit post five.

Trained by two-time Kentucky Derby winner Doug O’Neill, Hot Rod Charlie captured the Louisiana Derby (GII) in his most recent start and closed 2020 with a runner-up finish to Essential Quality in the Breeders’ Cup Juvenile. Flavien Prat, winner of the 2019 Kentucky Derby on Country House, has the mount and will break from post nine.
One other trainer will be seeking to add his Kentucky Derby win total and it could be a record-breaker.

Bob Baffert is tied with Ben Jones for most Kentucky victories with six and he will shoot for No. 7 with Zedan Racing Stables’ Medina Spirit (15-1).

Runner-up in the Santa Anita Derby in his most recent start, Medina Spirit will be ridden by three-time Kentucky Derby winner John Velazquez and break from post eight.
Another rider trying to add to his Kentucky Derby victory total is Mike Smith. Smith, a two-time winner including the most recent Triple Crown winner Justify, has the call on Winchell Thoroughbreds’ Midnight Bourbon (20-1) for trainer Steve Asmussen.
Runner-up in the Louisiana Derby, Midnight Bourbon will break from post 10.

Asmussen will have one other entrant in the race: Arkansas Derby (GI) winner Super Stock (30-1) who is owned by his father
Keith Asmussen and Erv Woolsey. Ricardo Santana Jr. has the mount on Super Stock and will break from post 18. 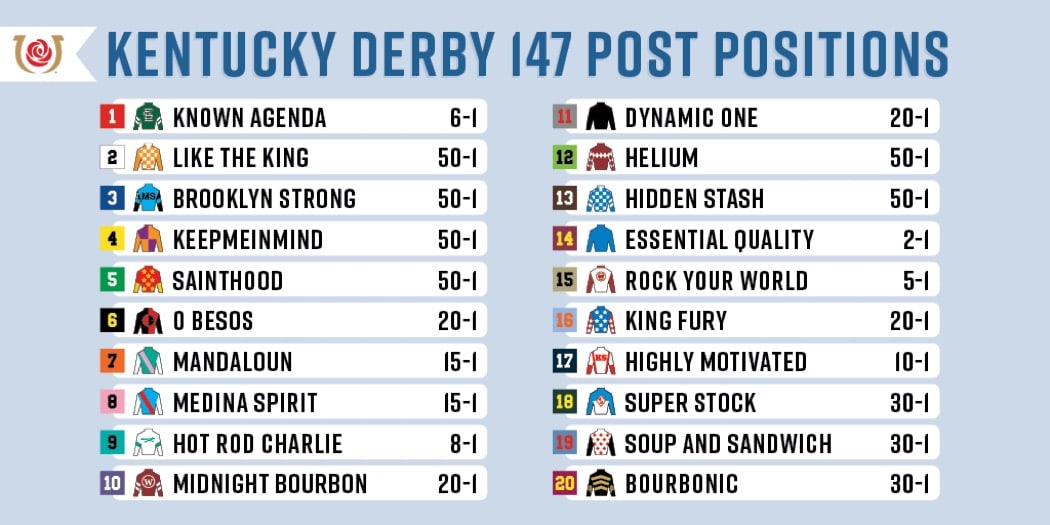