Women out rebounded, men fall in high-scoring shoot out 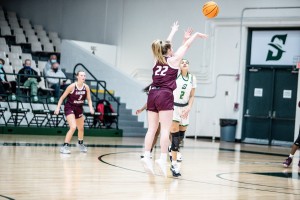 Stetson opened the game on a 9-2 run after a layup by Jamiya Turner less than three minutes into the game. The Colonels chipped away into the Hatters lead after a Jayla Johnson jumper cut the lead to five, 13-8, with 5:59 left in the first quarter.

A pair of free throws from Turner with 26 seconds remaining in the first quarter gave the Hatters a 10-point lead, 26-16 heading into the second quarter.

EKU answered back after back-to-back three pointers from Kalissa Lacy to cut the lead back to eight, 31-23, with 4:58 left in the second quarter.

An Ariel Kirkwood field goal with 23 seconds remaining in the third quarter cut the Hatters lead to eight, 52-44, but the Colonels could never get any closer after a Tatiana 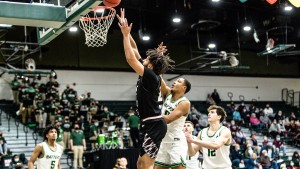 Streun three-pointer with 7 seconds remaining pushed the Stetson back to 11.

The Colonels shot 33 percent from the field.

Stetson outrebounded the Colonels 46-31 on the contest.

The Colonels return home on Thursday night to take on Kennesaw State. Tip-off is scheduled for 5 p.m.

A dunk from Jannson Williams and back-to-back lay-ups by Michael Moreno tied it at 34-34.  A 3-pointer from the left wing from Cooper Robb gave the Colonels a 37-38 lead with 4:18 to go in the first half.

Christian Jones had 23 points to lead Stetson, going 9-for-12 from the field.  Chase Johnston was 5-for-10 from long range and had 21 points.  Wheza Panzo made 6-of-7 from 3-point range and finished with 20 points.