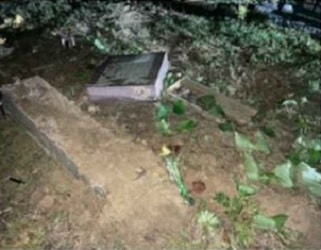 One of the broken tombstones/Laurel County Sheriff’s Department

person who they think intentionally drove a SUV through a cemetery, smashing head stones along the way.

Deputies say it happened Wednesday night at the Locust Grove Cemetery near London.

They say a driver in a Ford Expedition plowed through the cemetery, crashing into several gravestones and markers before slamming into a tree.

The driver ran off, leaving the SUV, which had no registration plates.

The Sheriff’s Office believes this was an act of criminal mischief and not an accident.