WAYNE COUNTY, Ky. (WTVQ) – The driver of one car 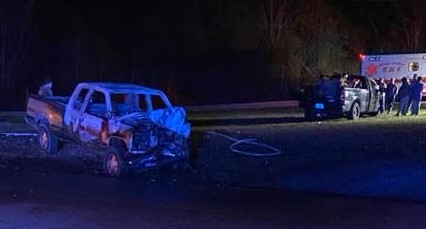 pulled another from his burning car following a head-on crash in Wayne County near the Tennessee state line, Thursday night.

According to the Wayne County Sheriff’s Department’s Facebook Page, deputies responded ot the crash at about 8:05 p.m. at the intersection of Kentucky Highway 1258 and Foster Mountain Road.

According to Sheriff Tim Catron, deputies Brent Rose, Jerry Coffey and Derek Dennis learned one of the vehicles failed to stop for a stop sign at the intersection and hit the other vehicle head on.

The first vehicle erupted in flames and the driver was partially ejected, according to the sheriff.

The second driver pulled the driver from the burning vehicle. The injured driver was flown to the University of Tennessee in Knoxville.

The investigation into the accident is continuing by Deputy Derek Dennis.