LEXINGTON, Ky. (WTVQ) — In September of 1985, Kentucky’s Andrew Carter Thornton II parachuted from a Cessna twin-engine 404 and landed on a driveway in Knoxville, Tennesse, wearing a bulletproof vest, special night vision goggles, two pistols, ammunition — and millions of dollars worth of cocaine.

His parachute failed and he died at 40 years old.

In his lifetime, Thornton attended a private elementary school in Lexington, Sewanee Military Academy in Tennessee, joined the Army, joined the then-Lexington-Fayette Urban County Police Department, received a law degree from Eastern Kentucky University then lived on an isolated Jessamine County farm where he became “increasingly paranoid” of an impending “Armageddon,” according to a 1985 story posted in the Washington Post.

But probably one of the most known stories to come from the former police officer turned drug smuggler’s death is that of the so-called “cocaine bear.”

About three months after Thornton’s “bizarre” death, Georgia Bureau of Investigation agents found 40 packages of cocaine in the Chattahoochee National Forest — alongside a dead black bear, as reported by United Press International reported.

Around that time, local police officers were looking for the duffel bags filled with cocaine and weren’t able to find them all at once so they returned the next day. That’s when they found another duffel bag — and the bear, too.

The bear was taken to the state crime lab and was determined to have died of a cocaine overdose. According to the UPI, agents believe the duffel bags were dropped from the same plane piloted by Thornton before he parachuted.

To add to the story, Kentucky for Kentucky (self-described as a souvenir shop of entertaining clothes and quality goods) now holds the actual taxidermied body of the bear. The store is located in Lexington. 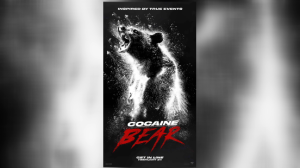 A movie about the bear, titled Cocaine Bear is set to be released on Feb. 24, 2023, and is rated R. The movie was announced on Twitter.