This news comes after Kentucky’s Supreme Court affirmed last week its previous ruling that some historical betting was not constitutional.

In September, they determined that Historic Horse Racing operations such as Red Mile and Keeneland gaming didn’t meet the state’s requirement for being pari-mutual.

This meant that some of that gaming offered at their betting parlor is illegal because these games don’t create a fair pool among patrons.

On Sunday, Keeneland and Red Mile released this statement below, regarding temporary closure of historical racing operations at Red Mile:

“We were disappointed the Kentucky Supreme Court denied our petition for rehearing. At this time, Keeneland and Red Mile have made the very difficult decision to temporarily close historical horse racing operations until there is more clarity surrounding the situation. We have confidence the Kentucky legislature will continue its efforts to protect jobs and state revenue generated by historical horse racing, as well as protect Kentucky’s signature horse racing industry.”​

Joe Calhoun is a frequent gamer but believes these games shouldn’t be put before other responsibilities.

He also argues it also helps the economy during this global pandemic.

“I’m helping out the community with the jobs it’s raising here. It’s a big operation and I hate to see people losing their jobs with what little jobs exist right now. We need all we can do,” says Calhoun.

In a tweet Friday, KyHBPA said, “Enjoy racing for Kentucky’s purses? Help us maintain them. Tell #KyLegislature it must act on HHR – loss will devastate industry, cost untold jobs.”

The post contains an attachment encouraging people send a message to their Kentucky state representative and senator. It includes a link and directions on how to submit a comment.

The message notes only residents with a Kentucky address can reach out through the link to the correct state Representative and Senator, however, it suggests if you stay in Kentucky while racing, you can still reach out with that address:

“It’s important the Kentucky Legislature hears from you even if you race in the state only part of the year. Your horses are keeping and creating jobs in the state. You are a business enterprise in the commonwealth, generating tax dollars and contributing to our signature industry and tourism in the Commonwealth.” 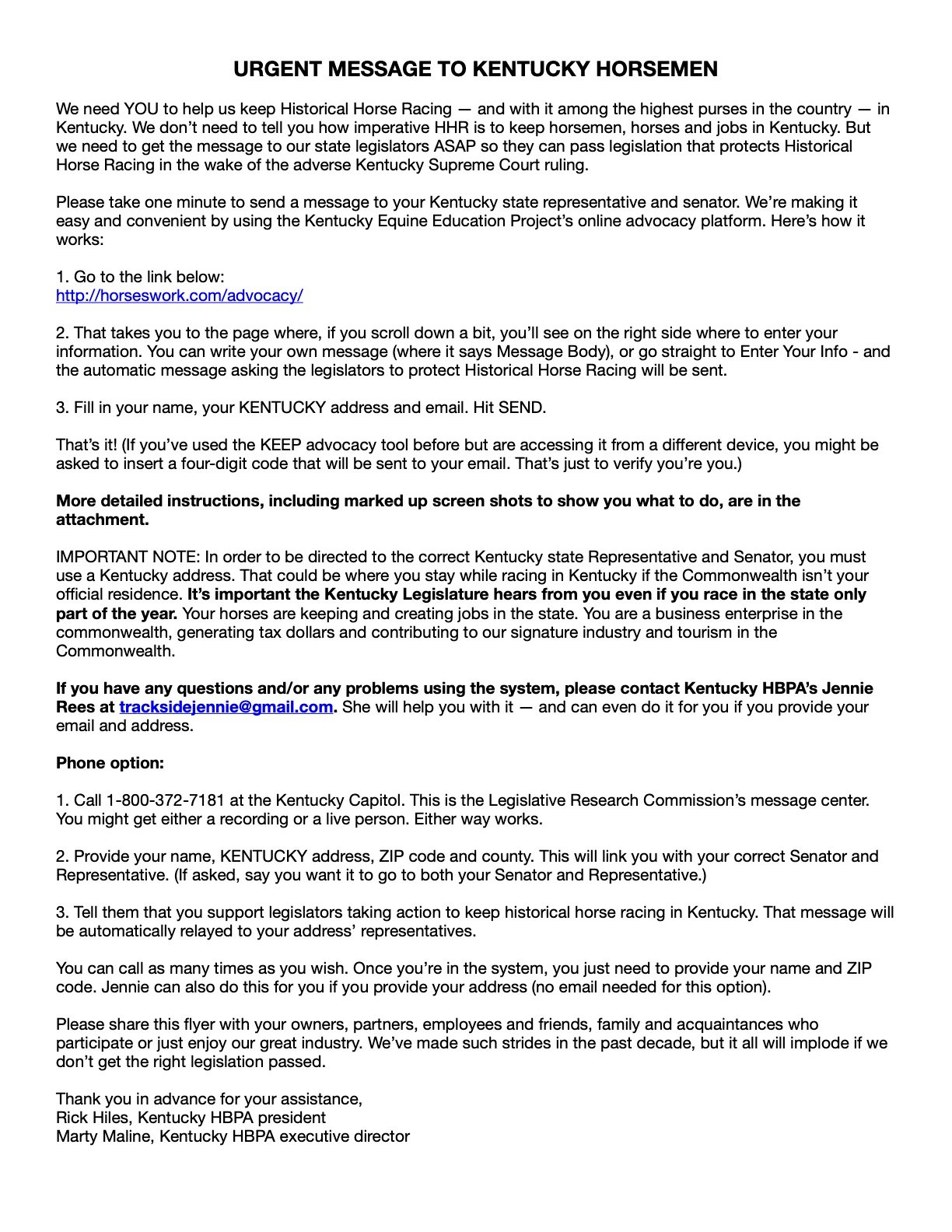 LEXINGTON, Ky. (WTVQ) – A group that has waged a 10-year battle against what he calls illegal slot machines in the state praised a state Supreme Court ruling Thursday and said parlors where the games are located should be closed.

The Family Foundation welcomed the high court’s 6-0 decision  that turned down the petitions of the race tracks and the Kentucky Horse Racing Commission to rehear the decade-old case contesting the legality of so-called “historical horse racing” slot machines.

The Court had ruled on Sept. 24 last Fall in a unanimous 7-0 decision the machines did not meet the definition of parimutuel wagering and were therefore illegal.

Gov. Andy Beshear did not immediately respond to a request for comment. The Horse Race Commission said it will abide by last fall’s ruling.

“The Kentucky Horse Racing Commission (KHRC) will act in accordance with the terms of the judgement entered by the Franklin Circuit Court, pursuant to the September 24, 2020 Opinion of the Kentucky Supreme Court. KHRC will not provide additional comment at this time, due to ongoing litigation,” the Commission said.

Kenneland said it is reviewing the decision.

“We are aware of the decision and are evaluating our options moving forward,” Keeneland said in a statement.

The Family Foundation said it fully expects the tracks and allies in state government to close the doors on the facilities.

“The state’s horse racing tracks have been legally running from the law and the State Constitution for ten years while the regulatory agency overseeing them has looked the other way. Now they’ve run out of options,” said Martin Cothran, spokesman for The Family Foundation, the group that contested the legality of the machines.

“This decision was something of a formality, since the Court rarely grants petitions to try a case over again,” added Cothran, spokesman for The Family Foundation. “And since this case spent ten years in the courts and the ruling was unanimous, it was even more likely the Court would turn them down.”

“The tracks have continued to operate after the September ruling knowing that their chances of getting the Court to change its mind was a shot in the dark. Now that the Court has fully finalized its decision – unanimously, the tracks have to shut down their illegal gaming parlors.”

Cothran criticized the tracks for operating the machines for 10 years and taking over $800 million from Kentucky citizens unlawfully, even though they knew their legality was in doubt all along

“The race tracks have known all along that the legality of these machines was doubtful. That is why they petitioned the Franklin Circuit Court in 2010 to get its approval. It was only after that action that The Family Foundation asked and was permitted to intervene in the case in order to provide proper scrutiny and accountability.”

Newly-elected Justice Robert Conley was not sitting when the case was reviewed.

The ruling stems from a long-running dispute between racing interests and The Family Foundation, a conservative group that opposes expanded gambling. The foundation has long argued that historical horse racing machines do not meet pari-mutuel wagering standards under Kentucky law.

Attorneys for the racing interests have insisted that historical horse racing is a valid form of wagering. The high court heard oral arguments in the high-stakes case last month.

After the court’s ruling, the foundation said “the time for flouting the law is over.” The group called on race tracks to cease operating their historical racing parlors “until it can be demonstratively shown that their activities are legal.”

“This decision reaffirms that words have meaning and that even the state’s most powerful industry can’t turn the plain language of the law upside-down for its own economic benefit,” said Martin Cothran, a spokesman for the foundation.

The Kentucky Horse Racing Commission did not immediately comment on the ruling’s effect on historical racing gambling parlors.

But Gov. Andy Beshear said the potential impact is huge and he already is beginning discussions with the industry and state lawmakers on potential legislation to overcome a potential court ruling against the industry in the future.

“I believe the ruling is potentially devastating for so many Kentucky jobs, the horse industry and the state budget,” Beshear said, noting the machines generate millions of dollars in revenue for the state each year.

“We have not seen the widespread ills everyone predicted from the use of these machines…we have widespread gambling in almost every state around us…Indiana is buildings its roads with the money Kentuckians gamble there, Missouri is paying for health care,” he continued, noting the gambling industry is key “if we are to remain competitive, if we are to be more competitive.”

Keeneland vice president Vince Gabbert told the Lexington Herald-Leader the track was still evaluating the opinion “but nothing seems to change course on their previous ruling that the commission acted appropriately in promulgating the regulations.”

VanMeter acknowledged the “economic pressures” riding on the issue for the horse racing industry.

For years, Kentucky horse tracks pushed to legalize casino-style gambling, but those proposals died in the state legislature.

The tracks instead ventured into historical horse racing, which pumped money into race purses and bred development funds to put them on more solid ground in competing with tracks and horse breeding operations in other states. The historical racing games typically show video of condensed horse races.

The Supreme Court ruled Thursday that the historical wagering system under review doesn’t meet the pari-mutuel standard because bettors aren’t wagering on the same race and aren’t betting into the same pool to set odds.

VanMeter flatly said it would be wrong to suggest “that the random generation of multiple historical horse races with patrons placing wagers on different races qualifies as pari-mutuel wagering.”

“To be clear, pari-mutuel wagering requires that patrons generate the pools based on wagering on the same discrete, finite events,” he added.

The ruling reversed a lower court ruling that the form of historical wagering constituted a pari-mutuel system of wagering. Five of the Supreme Court justices concurred with the opinion while Justice Michelle M. Keller wrote a separate concurring opinion.