FRANKFORT, Ky. (WTVQ) -After vetoing both House and congressional redistricting plans, Gov. Andy Beshear allowed a similar measure for senate districts to become law without his signature. The deadline for veto was Friday.

Upon the filing of Senate Bill 2 (SB 2) with the Secretary of State’s office without the governor’s signature, state senate districts have immediately conformed with the provisions of Senate Bill 2.

SB 2 was initially voted on and passed in both the Senate and the House on January 8th, when it was then sent to Governor Beshear for consideration. The governor had three options: sign the bill into law, veto the bill or allow the veto period to expire, in which a bill becomes law without the governor’s signature. The veto period expired at midnight on January 21st, and the bill immediately went into effect upon filing with the Secretary of State’s Office.

As stated in the Kentucky Constitution, the sole authority of redistricting is granted to the General Assembly and is overseen by the duly elected representatives elected by the people of Kentucky. The Senate redistricting bill redrew the 38 Senate district boundaries to meet state and federal constitutional and legal requirements, largely influenced by population shifts identified from 2020 census data. It upheld the principle of equal representation to ensure that all Kentuckians have an equal voice in Frankfort, and adhered to the population deviation of +/- 5 percent of the total population divided by 38.

Now that SB 2 is law and has gone into effect, senators will begin establishing relationships with constituents in their newly designated districts.

FRANKFORT, Ky. (WTVQ) – As expected, the Legislature Thursday evening overrode the governor’s veto of congressional redistricting maps, sending them to the Secretary of State.

The override of the gubernatorial veto happened quickly, as the veto override for SB 3 cleared the Senate chamber by a vote of 25-10 and passed it over to the House where it was also overridden by a vote of 64-24.

Redistricting is the process that determines who represents the people. The redrawing of legislative maps occurs every ten years following the United States Census Bureau’s release of decennial census data. The U.S. Constitution and federal law require redistricting to provide for equal representation among the citizen population.

Redistricting has been and remains the sole responsibility of the duly elected members of the state legislature. The congressional redistricting maps approved by the legislature meet legal and constitutional requirements and adhere to applicable case law.

According to 2020 Census data, the population of Kentucky grew by 0.1% to just over 4.5 million. Divided among the state’s six congressional districts equates to approximately 750,000 residents per district. Deviation among the resident populations in each of the six districts was kept to a minimum.

SB 3 has been delivered to Kentucky Secretary of State Adams for enactment. This bill carries an emergency clause, meaning it’s enacted as law in the Commonwealth and congressional district lines would conform immediately to its provisions.

In the veto of the House districts, Beshear said the districts appear designed to deprive some communities of representation. “It is an unconstitutional political gerrymander that 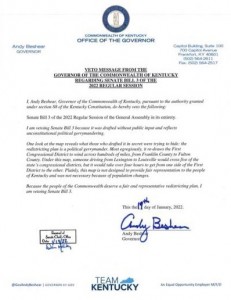 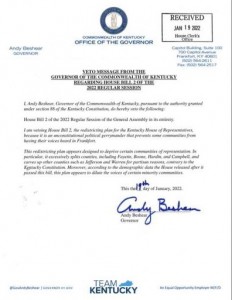 prevents some communities from having their voices heard in Frankfort,” he wrote in his veto message.

“We are disappointed that the Governor has chosen to again veto lawfully enacted legislation,” Osborne said.

“He is wrong on the facts, wrong on the law, and he knows it. This proposal meets all legal considerations. It splits no precincts, divides the fewest number of counties possible, and preserves communities of interest. As a result of carefully and intentionally following the guidelines, it even has the added benefit of significantly increasing minority representation. By issuing this veto, the Governor is showing that at best he is poorly informed, and at worst it is blatant political posturing. We will use our legislative authority to override this veto,” Osborne concluded.

In his veto message on SB 3, Beshear said the measure was drawn with no public input. He is most critical of the sprawling First District which got even larger. During debate on the measure in the Legislature, that face was one of the most questioned issues.

Democrats noted Wednesday that driving from Lexington to Louisville will carry the driver through five of the state’s six congressional districts.

The measures overwhelmingly cleared the Republican-dominated legislature on Jan. 8, signaling the new boundaries likely would become law even if the Democratic governor rejected them.

While GOP lawmakers have the political muscle to override any vetoes, the looming question is whether the new boundaries will draw court challenges. The bills’ defenders expressed confidence that the once-a-decade map-making work would hold up against any lawsuit.

The changing boundaries stem from population changes in the past decade. Eastern and western Kentucky generally lost population, while central and northern sections gained more residents.

In reshaping Kentucky’s six congressional districts, lawmakers kept the only Democratic-held district basically intact. Democrats had fretted that the Louisville-area 3rd District might be carved up.

Instead, under the new plan the 3rd District would continue to cover most of Jefferson County, which includes Louisville — the state’s biggest Democratic stronghold. A section of eastern Jefferson County would be joined to the GOP-dominated 2nd District.

Much of the criticism was aimed at extending the oddly shaped 1st Congressional District to add Franklin County, which includes Democratic-leaning Frankfort in central Kentucky. The district is predominantly based in western Kentucky.

“What it does to Franklin County is wrong, pure and simple,” Democratic Rep. Derrick Graham of Frankfort said at the time. “Franklin County was and is and always will be a part of central Kentucky, both geographically and in spirit.”

The likely beneficiary of the redrawn boundaries would be 6th District GOP Rep. Andy Barr, the only Kentucky congressman to face a tough reelection campaign in recent years. Shifting Franklin County out of the 6th is likely to change the political calculus in what has long been a swing district.

Republican U.S. Rep. James Comer, who represents the 1st District, has said he would be fine with representing Frankfort, the state’s capital city, while acknowledging he had expressed another remapping preference to legislative leaders. Comer told The Associated Press that his first choice was to add Barren and Green counties, which he said would have “made the district whole.”

Comer and his wife have homes in Monroe and Franklin counties in Kentucky. They purchased the Franklin County home a decade ago when he was state agriculture commissioner, which meant that his work was based in Frankfort, the seat of state government.

The congressional redistricting measure, however, kept Barren and Green counties in the 2nd District. The new map would extend the 1st District’s fishhook deeper into central Kentucky to include Franklin and Washington counties and part of Anderson County. The sprawling 1st District would span from Fulton County, tucked into the southwestern corner of Kentucky, to Frankfort, about 300 miles (483 kilometers) away.

The 1st District has to grow due to population losses reflected in the latest census. Comer has won by landslide margins, and the rural district would remain reliably Republican with the changes.

Legislative criticism of the new maps wasn’t limited to Democrats.

Republican Rep. James Tipton opposed the congressional redistricting bill because it splits Anderson County, which he represents, into two congressional districts — the 1st and 6th districts.

“As I have looked at the way that the precincts have been split, quite frankly there are going to be people who are not going to know who their congressman is,” he said two weeks ago.

Meanwhile, lawmakers also gave final passage Saturday to a bill that would alter the process for legal challenges of redistricting measures. Under the measure, such litigation would be assigned to the circuit court in the county of the plaintiff.

During debate on the legislative districts, especially the 100 House districts, Democrats objected that the GOP-drawn map unfairly split urban areas to the benefit of Republicans. The bill recasting the Senate’s 38 districts easily cleared the Senate, with a handful of lawmakers objecting.

In eastern Kentucky, Republican Sen. Brandon Smith’s district would be spread across nine counties. He currently represents a half-dozen counties.

“I think that we deserve to be able to have more reflective districts down there instead of having something as giant as what has been created with this map,” he said at the time.

Republican Sen. Paul Hornback, who decided not to seek reelection, said most of his north-central Kentucky district was reshuffled elsewhere. Hornback said he understood changes were inevitable but added, “I don’t agree with the way it was done, and neither do my constituents back home.”

Sen. Morgan McGarvey, the chamber’s top-ranking Democrat, noted that Fayette County would be carved into seven Senate districts under the plan, with only one district entirely within the county.

Such a configuration could dilute the county’s political influence, he said. Lexington, the state’s second-largest city, is in Fayette County. The plan’s supporters say that having more lawmakers representing at least a portion of the county could actually increase Fayette’s influence.

Republican Sen. Max Wise voted for the measure but acknowledged the new realities created by the bill. Wise faces the prospect of representing a reshaped district in southern Kentucky.

“This is a very tough day for, I’m sure, many of us who are losing some counties that we represented over the past few years,” he said before the vote on Jan. 6.

Wise and Smith stressed that they look forward to representing their new counties.

Stivers noted that no Senate incumbents were pitted against each other in the same district under the new plan, which he called the “ultimate test of fairness.”

In the state House’s redistricting plan, four sets of incumbents — split equally among Republican and Democratic lawmakers — would be placed into the same districts.

Rep. Norma Kirk-McCormick, one of the Republicans being matched against a GOP colleague, said the redistricting vote was one of the toughest she’s made as a lawmaker.

“The hard part is that it puts me in a position to have to run a primary race against another good Republican candidate,” she said.

Under the new map, she would be placed in the same eastern Kentucky district with Rep. Bobby McCool. She referred to him as a “very good person.”

“Let’s get this show on the road and move on,” she said shortly before the House voted on Jan. 6.