As home sales near record, inventories continue to fall 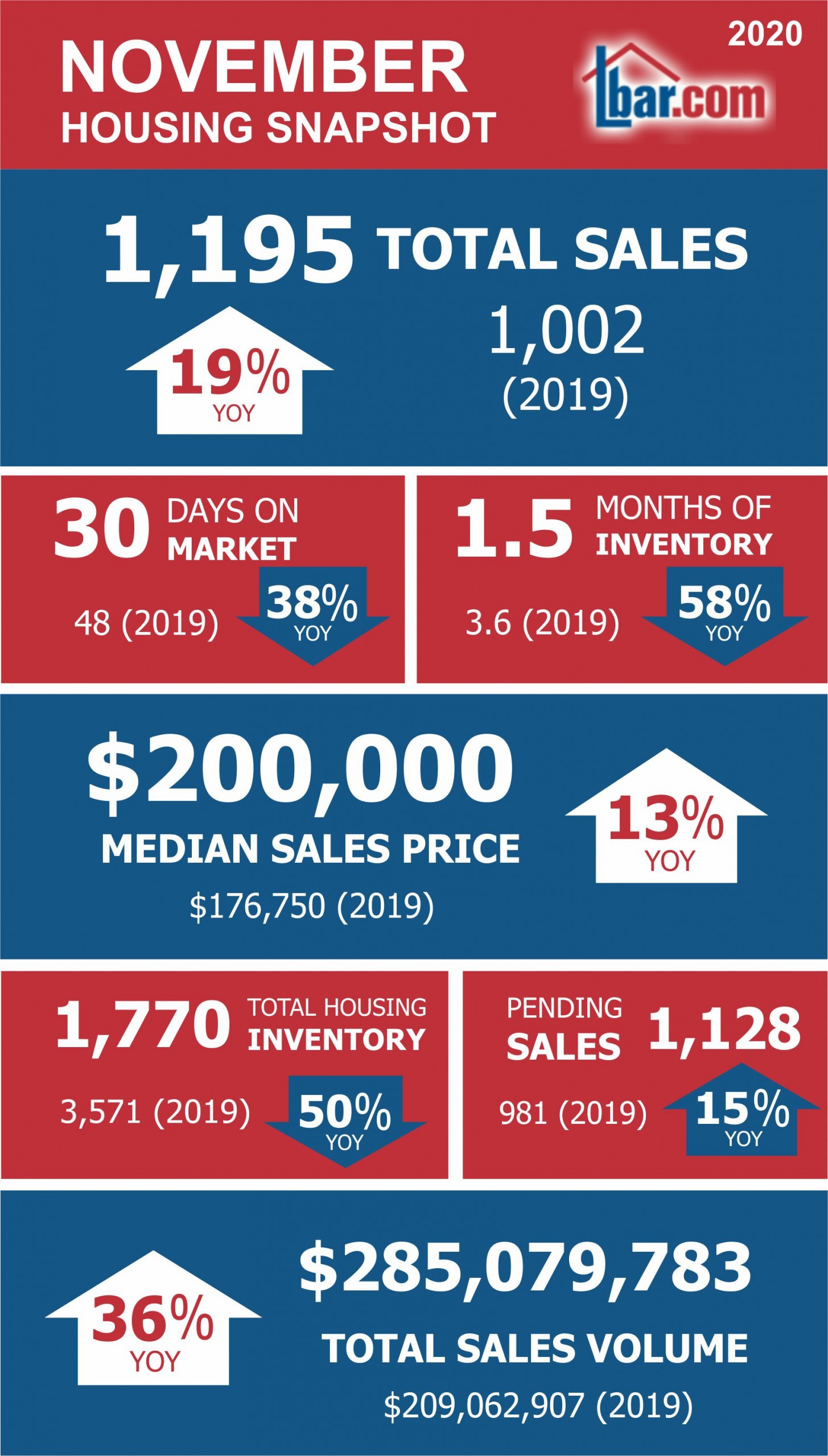 positively impacted home sales in the Central Kentucky region for several years. And 2020 is not an exception.

The monthly total is a record for the month and pushed sales for the year up 7 percent (November 2020 Stats).

“Through the pandemic, real estate has remained strong here in the Bluegrass region of Kentucky,” said Greg Buchanan, president of the Lexington-Bluegrass Association of REALTORS® (LBAR). “The pressure on the housing market subsided relatively quick in the earlier months of the year and mortgage rates have continued to stay low. The current situation has been advantageous to many of the buyers that stayed in the market.”

Last week, the average U.S. mortgage rate for a 30-year fixed loan fell to 2.66 percent, a new record. With the weekly record drop, there have now been 20 consecutive weeks when average mortgage rates have been below 3%, and the 16th time this year rates have broken their own record, according to Freddie Mac.

Predictions are that rates will remain under 3 percent going into 2021 and will hover just north of 3 percent over the next two years.

Transactions under contract are now on a seven-month stretch of year-over-year records. In addition, this total is an indicator that December figures should exceed 2019 totals, making 2020 a record year for real estate sales.

The boost in monthly sales pushed total housing inventory levels to new lows. November dropped 50 percent in total homes on the market with only 1,770 residential properties for sale across all 26 counties in LBAR’s jurisdiction.

Last year, that number was 3,571 for November and has been declining sharply ever since, with August seeing the first time in history that inventory numbers fell below the 2,000 mark.

A bright spot for inventory levels was an increase in new listings to the market. For the second month in a row, new listings were up from the previous year. November saw an 8 percent increase, jumping to 1,170 homes from 1,083 in 2019.

However, even with new properties coming online, the steep increase in sales held the months of inventory at near record lows. Inventory levels in November were at 1.5 months, down 58 percent from 3.6 months in 2019. This is an increase over the previous three months when months of inventory has stalled at 1.4 months.

Six months of supply is considered a balanced market.

“We have seen a few optimistic signs for inventory opening up in the last few months,” said Buchanan. “New construction has remained strong this year and new inventory is hitting the market. But it has not been nearly  enough to meet demand and home prices have continued to rise because we don’t have enough properties to offer consumers who are moving to the area or move-up buyers already here.”

Home prices rose in November to $200,000, a 13 percent increase over last year when the median was $176,750 and was the first time the monthly total hit the $200,000 mark. Home prices have risen for 21 straight months and November recorded the sixth consecutive month with median prices closing at or above the $200,000 level. For the year, prices have risen just over 11 percent.

And homes are selling fast with 3 out of every 4 homes that hit the market going under contract in less than a month. In November, only 5 percent of home sales took longer than 4 months. This has pushed days on market down to 30 days in November, a decrease of 38 percent over the 48 days seen in 2019 and down 9 percent over the previous month.

On the year, days on market is down 10 percent, reaching 44 days for all residential properties.

Buchanan added, “The colder months have not slowed down in real estate and the spring market is right around the corner. There are no signs that indicate there will be any significant change heading into the next season so anticipate more of the same – increase in sales, higher prices and low inventory. Buyers and sellers should get prepared so they have a complete understanding of what to expect when it comes time to make a move.”