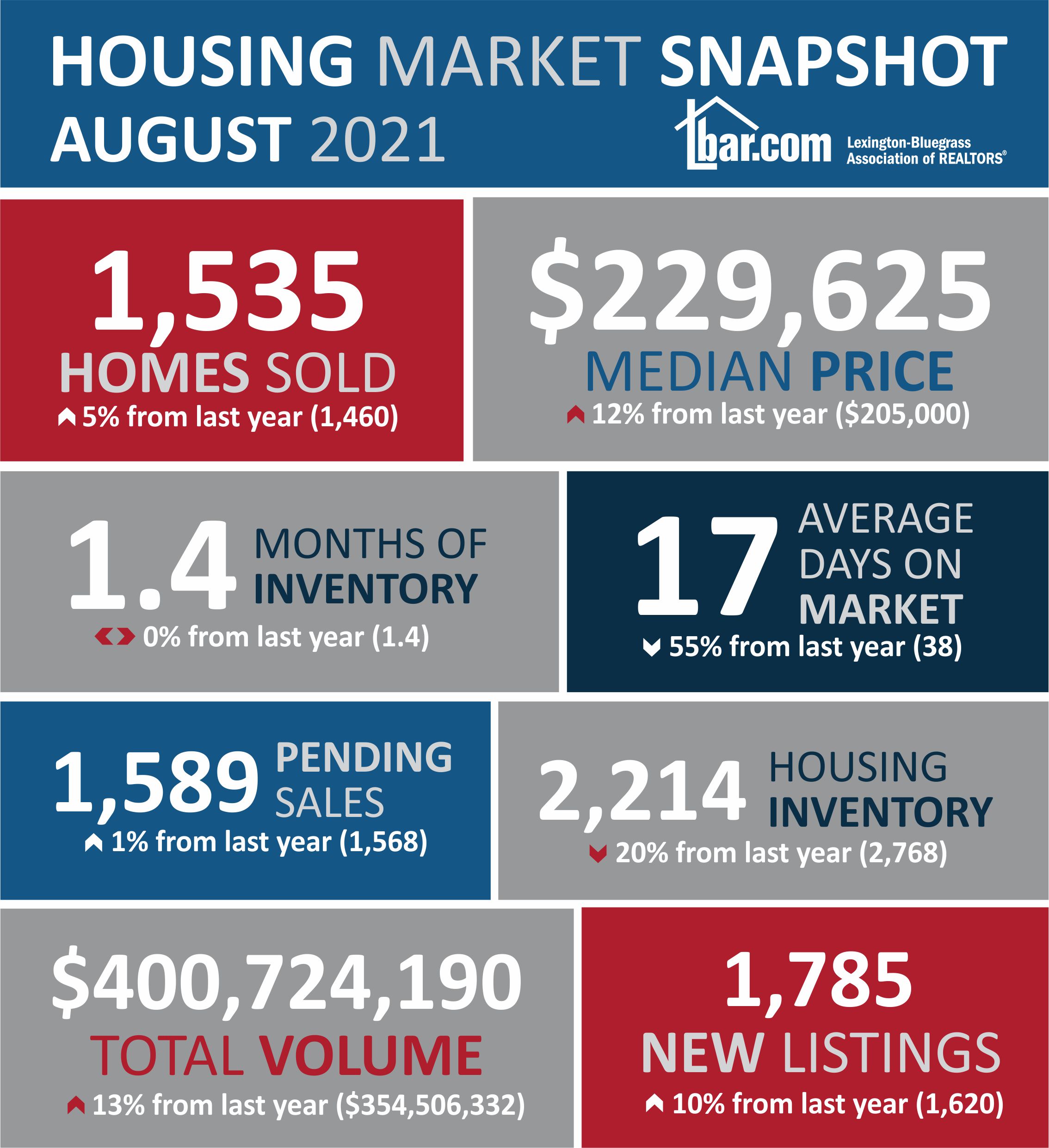 Lexington region in August, both from new sales momentum and the merger of the Lake Cumberland real estate association into the Lexington-Bluegrass Association.

Transactions in August reached an all-time high for the month and second highest on record thanks, in part, to an agreed merger with the local Somerset-Lake Cumberland Association, the LBAR said in releasing the August numbers Thursday.

The additional listings from the four counties around the lake region pushed total sales to 1,535 in 2021 compared to 1,460 last year, an increase of 5% year-over-year (August 2021 Stats).

With the pandemic pushing the 2020 selling season into the fall months, a strong August this year is a promising sign for the remainder of the year, real estate professionals said.

Total sales through August remained up 6% from 2020, with 10,329 transactions closed in the first eight months of the year, compared to 9,762 during the same period last year.

This was the first time on record that sales topped five figures by August.

New construction home sales slipped year-over-year for the fifth straight month, with August sales standing at 109, a decrease of 11% over the 123 sales in 2020. For the year, new home transactions have dropped 15%.

“Going into the cooler months, there are many signs that point to a strong real estate market,” said Kristy Gooch, president of the Lexington-Bluegrass Association of Realtors®. “Homes are still selling extremely fast, however, the surge of multiple offers has leveled off as inventory creeps up.”

The pace of homes selling in August was at an historic low, coming in at an average of 17 days, 55% lower than the 38 days it took in 2020. The previous record, tied the previous two months in June and July, was 19 days.

Housing inventory has been on the rise since early summer and rose above the 2,000 mark for the first time since January.

The number of residential properties available jumped 16% from the previous month but is still 20% below the level from last year. Even though the 2,214 homes were spurred by an increase in listings from the Somerset area, housing inventory has risen each of the previous three months.

New listings have been steadily increasing since early spring and are up 10% in August, marking the fifth month in a row with monthly growth. The month saw 1,785 properties come online versus 1,620 in 2020.

The increase in new listings helped push inventory to a 1.4-month supply, the same as last August, but the highest since February.

“Inventory is picking up in some of the more the rural areas and Scott County, but we can certainly use more homes to counter the continued demand in the market,” said Gooch. “The metro areas in and around Fayette County are still suffering from an inventory crunch. The good news, however, is that prices have moderated some during these last few months giving buyers some reprieve from the immense appreciation that has been present for so long.”

The fall months may get a boost as pending sales rose for the first time since April. Even though the increase was just 1%, with 1,589 sales under contract in August compared to 1,568 last year, in 2020, the pandemic had pushed sales off until the cooler months.

Showings for properties stalled in the first three weeks of the month compared to last year before jumping ahead in the final week. This August, there were 5% less showings than in 2020 and 9% less than the month prior.

“Buyers in the market today aren’t having to tour as many homes as they were during the spring and early summer months,” said Gooch. “With the bidding wars slowing, buyers don’t have to scramble from property to property and are more measured about their selection while waiting for inventory to open up. And with interest rates keeping at record lows, which seems to be a repetitive theme over the past couple of years, they are able to absorb the price appreciation a little more easily.”