looking for someone at 5 a.m. landed in jail when Clay County Sheriff’s deputies found drugs, cash and guns on them and in their car.

It was the latest in a busy week for the department, a week that included foot chases, scuffles and a variety of other incidents.

According to Sheriff Parick Robinson, 19-year-old Cameron Saylor, of Frankfort, and 19-year-old Christian Hall, of London, both were charged with 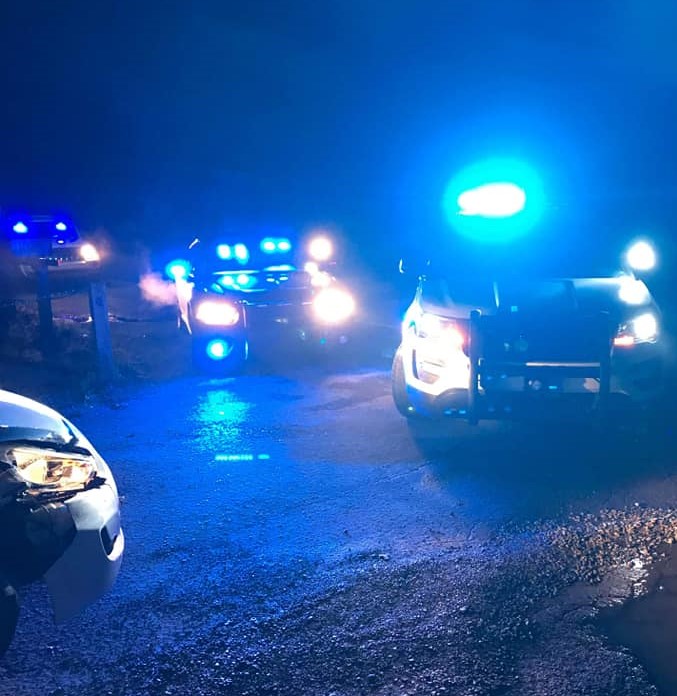 carrying a concealed weapon and menacing as a result of the traffic stop.

The case started when deputies Wes Brumley and Kendric Smith responded to the suspicious door-to-door visitors call and spotted a car matching the description on North Highway 421. They pulled the car over because it had only one headlight and when they got the driver, later identified as Saylor, out of the car for a field sobriety test, they found a loaded gun in his waistband, according to the sheriff.

Deputies also found a loaded gun under the passenger seat and a backpack with a bundle of marijuana, scales, white pills and cash, according to the Facebook post.

In an unrelated case, at about 2:30 a.m. Wednesday, April 1, 30-year-old Ryan Hatfield, of Belles Fork Road, was charged by Brumley with fourth-degree assault and disorderly conduct, according to the department’s Facebook page.

The charges came after Brumley responded to a call of a fight between Hatfield and a juvenile.

At about 9:40 p.m. Tuesday, Sgt. Jeremy Gabbard arrested 43-year-old Teresa Napier, of Rhodes Street, for possession of meth, resisting arrest, tampering with physical evidence, and public intoxication on drugs, according to the sheriff.

Gabbard responded to a call on Price Hollow Road and when he arrived, Napier ran to his car and then ran when Gabbard got out. She was caught after a short foot pursuit, according to the sheriff.

While being taken to the jail, Napier tried to hide a glass container with suspected meth inside and at jail, officers found a glass pipe with possible drug residue in her pocket, then sheriff posted.

In another case involving a foot chase and eventually the use of a deputy’s taser, 42-year-old Roy Jarvis, of Elbert Reid Road, was

charged at about 3:30 a.m. Sunday with four-degree domestic assault, fleeing police on foot, resisting arrest and drug intoxication, according to the sheriff.

Deputies responded to a domestic violence complaint on Elbert Reid Road and when they arrived, Jarvis ran. After a brief chase, he turned on deputies and began to fight. Brumley tased him but that didn’t work and three duties had to subdue him, according to the sheriff’s post.

. The photo attached is courtesy of the Clay County Detention Center.

County, was charged with receiving stolen property, false information, drug trafficking and possession and possible parole violation, according to the department’s Facebook page.

Deputy Jared Smith responded to a suspicious vehicle at a church on Crane Branch Road. He found the car and learned it was stolen. Wise gave the deputy a false name. Once he found her true identity, he learned she multiple arrest warrants in other locations, the sheriff said.

Smith located numerous baggies of suspected methamphetamine, drug paraphernalia and cash, according to the sheriff.

The deputies responded to a call of a man wearing a hoodie shining a flashlight into a house on Bald Knob Road. Arnold confronted Taylor and discovered he apparently had broke into the homeowner’s barn, stole his truck and backed it up to the house to steal items, the sheriff posted.