These cadets have special significance as they represent the 100th training class since the inception of the agency in 1948.

“Tomorrow will start the true ‘first day’ of their careers as Kentucky State Troopers. I challenge each of these new troopers to take that journey with humility, compassion, and a thirst to be better every day than they were the day before,” said Burnett.

The troopers earned their badges after completing 24 weeks of intense training while following ‘Healthy at Work’ guidelines, unlike any other cadet class in history have undergone.

“I have a feeling of special honor today to address the troopers behind us for their extraordinary accomplishments,” said Noble. “We started with eighty-two cadets and we ended up with forty-five troopers here today. It is truly a calling to become a Kentucky State Trooper.” 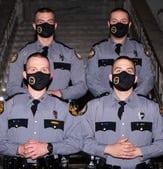 apart from others. “It’s a mystique that’s been built on ninety-nine other cadet classes of other men and women who have went out and served the commonwealth and I challenge you to carry on that mystique.”

KSP Academy Commander Shawn Darby noted the Class 100 graduation fell on the anniversary of the line of duty death for Trooper Anson ‘Blake’ Tribby who perished in 2013. 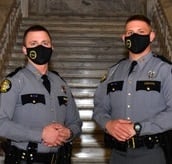 this morning,” said Darby. “As a team, the cadets performed an intense physical workout in honor of Tribby and then read his end of watch narrative.”

Trooper Tyler Bloodworth received the ‘Ernie Bivens Award’ presented to a cadet in each class who, in the opinion of the KSP Academy and fellow cadets, shows distinction as a leader, strives for academic excellence and has excelled in all phases of the academy’s physical and vocational training. 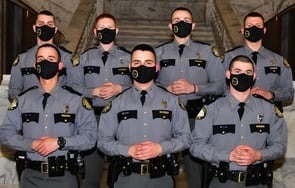 Studies from the Bluegrass Community and Technical College during their 24 weeks at the training academy.

These cadets benefited from new hiring guidelines established by state legislature in 2017. Through this revision, anyone who possesses a high school diploma or GED, and has three years of full-time work experience can apply for employment as a KSP Trooper and earn an associate’s degree during the training process.

Cadet Class 100 graduates who earned an associate’s degree are:

Cadet Class 100 graduates and their assigned posts are: