According to the Kentucky State Police, Joshua M. Hensley, 30, was arrested at 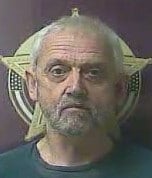 The arrests were the result of undercover Internet Crimes Against Children investigations. The KSP Electronic Crime Branch began the investigations after discovering the suspects promoting the sexual performance of a minor or sharing images of child sexual exploitation online.

Pulsford is an English professor at Berea College, where he is listed on the department’s Web site as ‘English program chair.’ The institution expressed shock at the arrest.

“Berea College officials have been informed of the arrest of Dr. Stephen Pulsford last evening by the Kentucky State Police on a felony charge of distribution of matter portraying a minor in a sexual performance. Dr. Pulsford has been serving as an associate professor at Berea College. The College is shocked at this news and completely unaware of the circumstances leading to Dr. Pulsford’s arrest. The College has not been contacted by Dr. Pulsford or the Kentucky State Police.  At present, College officials continue to monitor the situation and will not comment further at this time,” the college said in a statement.

The investigations resulted in the execution of search warrants Tuesday at three residences in Berea. Equipment used to facilitate these crimes were seized and taken to KSPs forensic laboratory for examination. The investigations are ongoing.

Hensley is charged with one count of possession of matter portraying a minor in a sexual performance. This charge is a Class-D felony punishable by one to five years in prison.

Helton is charged with one count of use of a minor in a sexual performance. This charge is a Class-C felony punishable by five to 10 years in prison.

Pulsford is currently charged with one count of distribution of matter portraying a minor in a sexual performance. This charge is a Class-D felony punishable by one to five years in prison. Hensley, Helton and Pulsford were lodged in the Madison County Detention Center.

The Kentucky Internet Crimes Against Children (ICAC) Task Force is comprised of more than twenty-six local, state, and federal law enforcement agencies. The mission of the ICAC Task Force, created by the United States Department of Justice and administrated by the Kentucky State Police, is to assist state and local law enforcement agencies in developing a response to cyber enticement and child sexual abuse material investigations. This support encompasses forensic and investigative components, training and technical assistance, victim services, prevention and community education. The ICAC program was developed in response to the increasing number of children and teenagers using the internet, the proliferation of child sexual abuse material, and the heightened online activity of predators searching for unsupervised contact with underage victims.