$22 million to provide for UK scholarships, building needs for the College of Medicine

LEINGTON, Ky. (WTVQ) – A University of Kentucky graduate from rural Kentucky is giving back to his alma mater in a big way. It’s the second-largest one-time financial donation in school history.

Rankin is donating $22 million to UK’s College of Medicine, some will be used for scholarships for med students.

“To meet their unmet financial needs so they can concentrate on their studies,” said Rankin. “They won’t have to worry about things like food insecurity or worried where they’re going to sleep for four years.”

“We’ve stuck with these 132 seats for the past couple of decades due to the current infrastructure,” said Rankin. “This building was built in the late 50s to address a major need at that time. This was Kentucky’s first medical school.”

Rankin said the new building would allow room for 50 more students each year. According to Dr. Robert DiPaola, College of Medicine Dean, increasing the number of seats available is important for the future of health care.

“According to the data released by the American Association to Medical Colleges, the united states could see an estimated shortage of up to 139,000 physicians by the year 2033,” said DiPaola.

“My vision is that this gift will enable all of the johnny’s and Susie’s from rural Kentucky, especially our Appalachian Region, to attend the College of Medicine,” said Rankin.

LEXINGTON, Ky. (UK Public Affairs/Kristi Willett/Steve Shaffer) – When his parents drove from their home in rural Lincoln County to drop Michael Rankin off at Haggin Hall on the University of Kentucky campus in August 1967, it was one of the biggest places he had ever seen.

His high school math teacher had encouraged his love for math and science and in 1971 he received an engineering degree. His dream was to go on to medical school, but he feared achieving this goal was out of reach. Today, he wants to make sure that young men and women from rural areas who aspire to be physicians have the support they need to make their dreams come true.

On Thursday, the University of Kentucky Board of Trustees approved a historic $22 million gift commitment to the College of Medicine from Dr. Michael D. Rankin.

Rankin’s gift is now the second largest single gift in university history and will support scholarships in the College of Medicine and the construction of a new health education building. 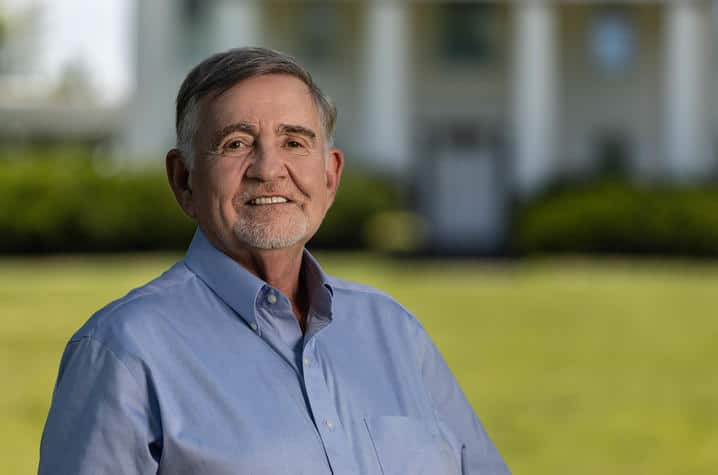 After receiving his bachelor’s degree, Rankin worked for six years as an electrical engineer to help pay for medical school, receiving his degree in 1980. He completed his residency in family medicine in 1983 at UK HealthCare and then pursued a highly successful practice in primary care and family medicine in Atlanta, before retiring and returning to Boyle County on a farm just 10 miles from where he grew up.

“Through this gift, Dr. Rankin has left an indelible mark of healing and hope, not just on this university, but on the state of Kentucky,” said UK President Eli Capilouto. “His influence will be felt by generations of students and the patients they later serve. It will help us continue to battle stubborn health disparities that plague our citizens and it will provide more opportunities for young men and women — young Kentuckians — to answer the calling of healing and hope throughout our state.”

As an alumnus, Rankin has devoted himself to the college, its success and the success of its students and has been an invaluable member of the UK Medical Alumni Association, past president of the UK Medical Alumni Association and associated board, chair of the Dean’s Advisory Council, and volunteer faculty in the UK Department of Family and Community Medicine. In addition, he has served many years on the College of Medicine scholarship and admissions committees.

“I think giving should come from the heart,” said Rankin who credits his parents for instilling a deep sense of giving to others and a strong work ethic. “My mentor, Dr. Emery Wilson, got me involved on the scholarship committee when I moved back to Kentucky full time and it was very apparent that many of our students have a significant unmet financial need.

“I felt strongly that it was important for me to step up and establish a scholarship so these students could concentrate on their studies and not have to worry about food insecurity or where they were going to live.”

Including this gift, his total giving to the university exceeds $23.5 million.

Rankin’s gift is also a catalyst in the efforts to construct a new health education building. During the May 4 UK Board of Trustees meeting, the design phase for the construction of the building was approved.

“Even a couple of years ago before COVID, it was evident we needed additional dollars for scholarships. And more importantly, we needed dollars for a new medical education building,” Rankin said. “Without someone stepping up to the plate, it would be at least 10 years before we would ever get this approved through the normal procedures for funding from the state.

“But Kentucky can’t wait. So that was the great impetus for me to step up to the plate now to get things to happen sooner than later.”

The plan for the building includes approximately 380,000 square feet for classrooms, simulation suites, conference rooms, support for newer technologies such as distance learning, immersive video and telemedicine instruction as well as office and support space for the College of Medicine, College of Public Health and other health care colleges.

“The demand for physicians is expected to exceed supply exponentially over the next decade, particularly in rural areas,” said Dr. Mark Newman, UK executive vice president for health affairs. “By providing support for both scholarship funds as well as physical space for learning, Dr. Rankin is making a tremendous impact in helping us respond to increased health care challenges throughout the Commonwealth.”