LEXINGTON, Ky. (WTVQ)- A filly by Tapit out of Grade 1 winner Embellish the Lace topped the opening day of Keeneland’s 2020 September Yearling Sale (see bottom of story for complete wrap up).

The family is from a family of Grade 1 winners Afleet Express and Materiality, Grade 2 winners Eye of the Tiger and My Miss Sophia, and Grade 3 winner Fighting Fantasy. 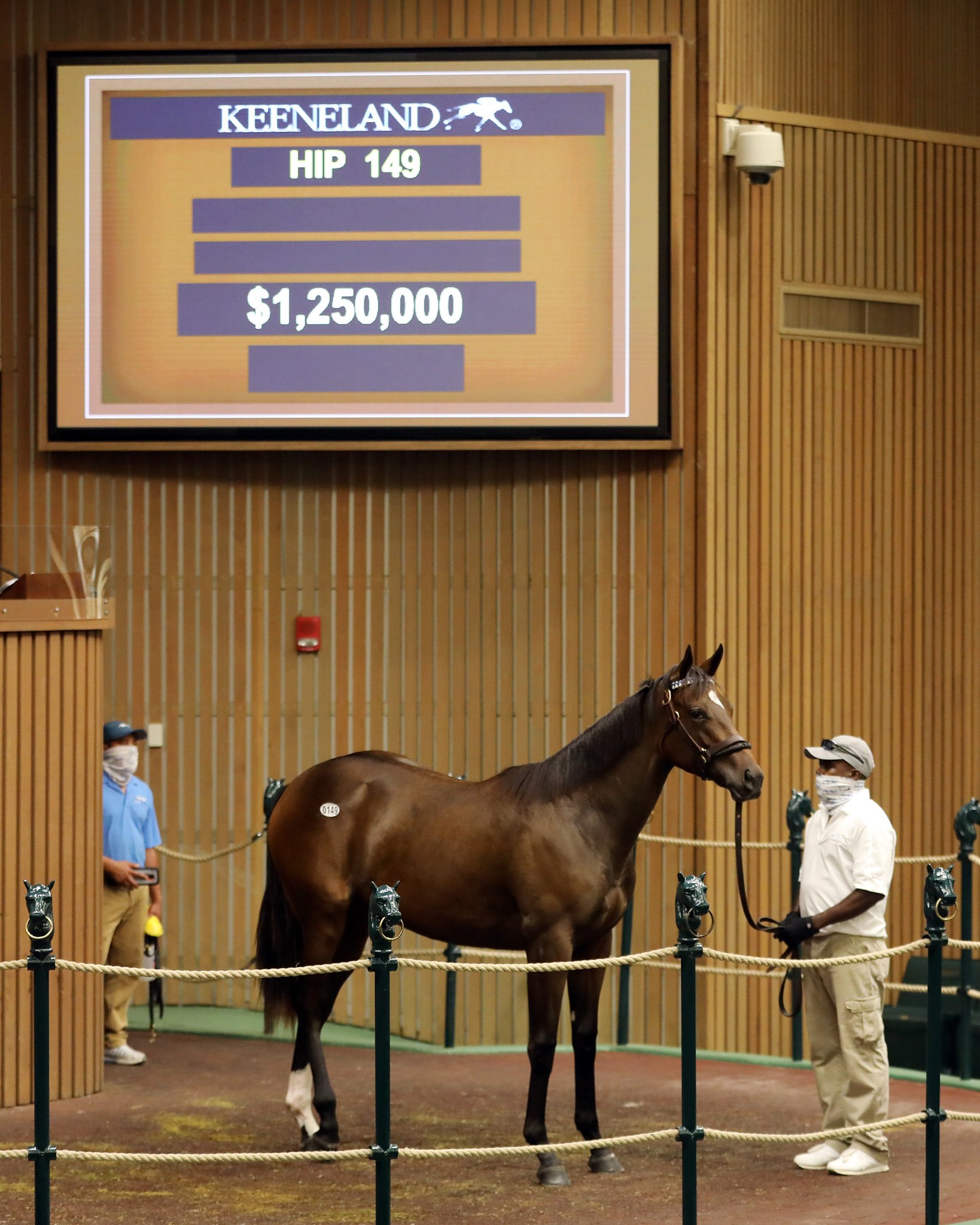 Denali Stud consigned the filly, whose dam is the Grade 3-placed winner Baffled, by Distorted Humour. The filly is half sister to Group 2 winner Boynton and Grade 3 winner Jacaranda. 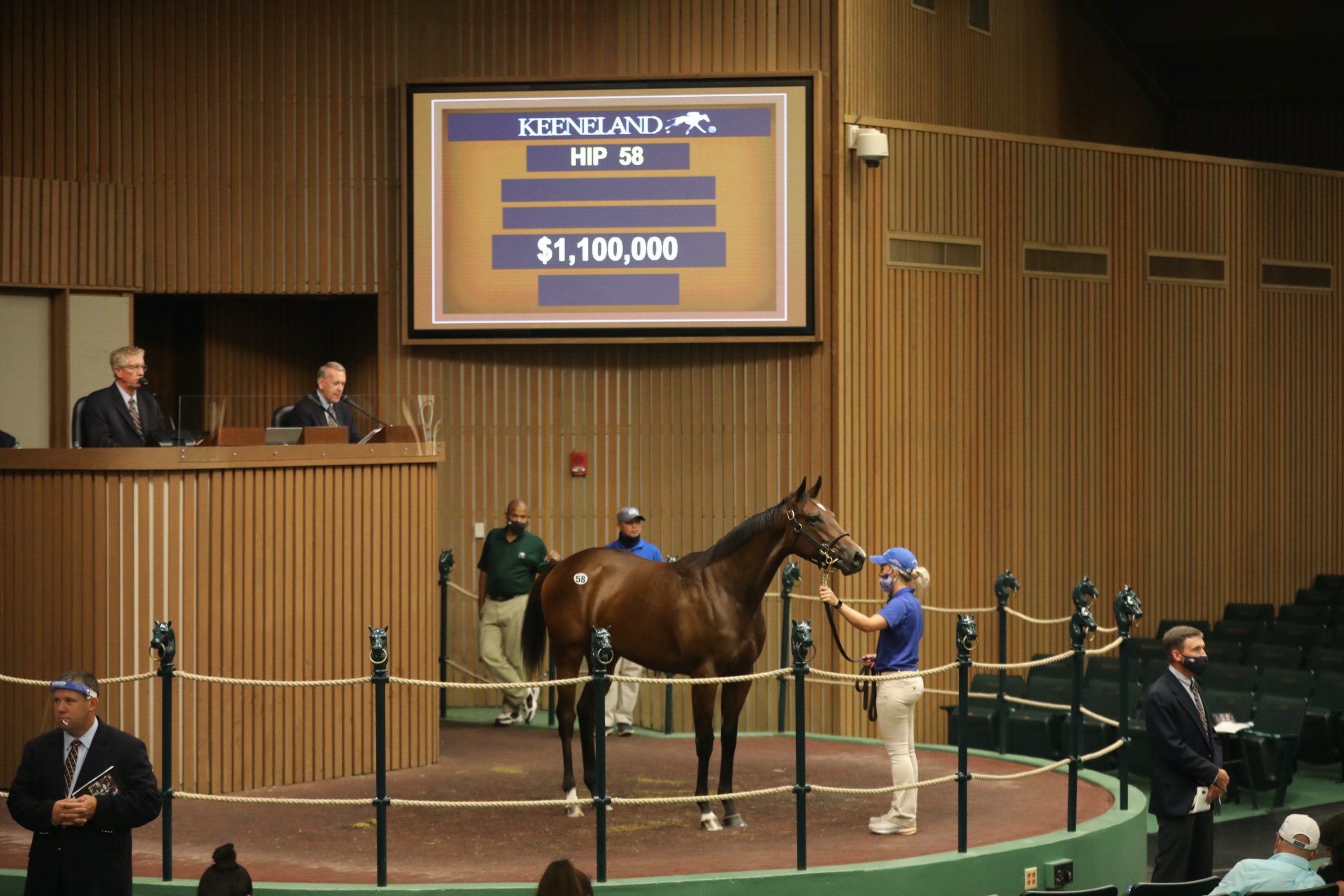 Donato Lanni paid $1 million for a filly by Quality Road consigned by Gainesway.

The filly’s dam is  the Grade 3-placed Ghostzapper mare Beloveda.

Her family includes Grade 3 winners Voyagers Quest and Golden Mystery. Her half-sister Mistress of Love, a stakes-placed daughter of Scat Daddy, sold for $1 million at the 2017 September Sale. 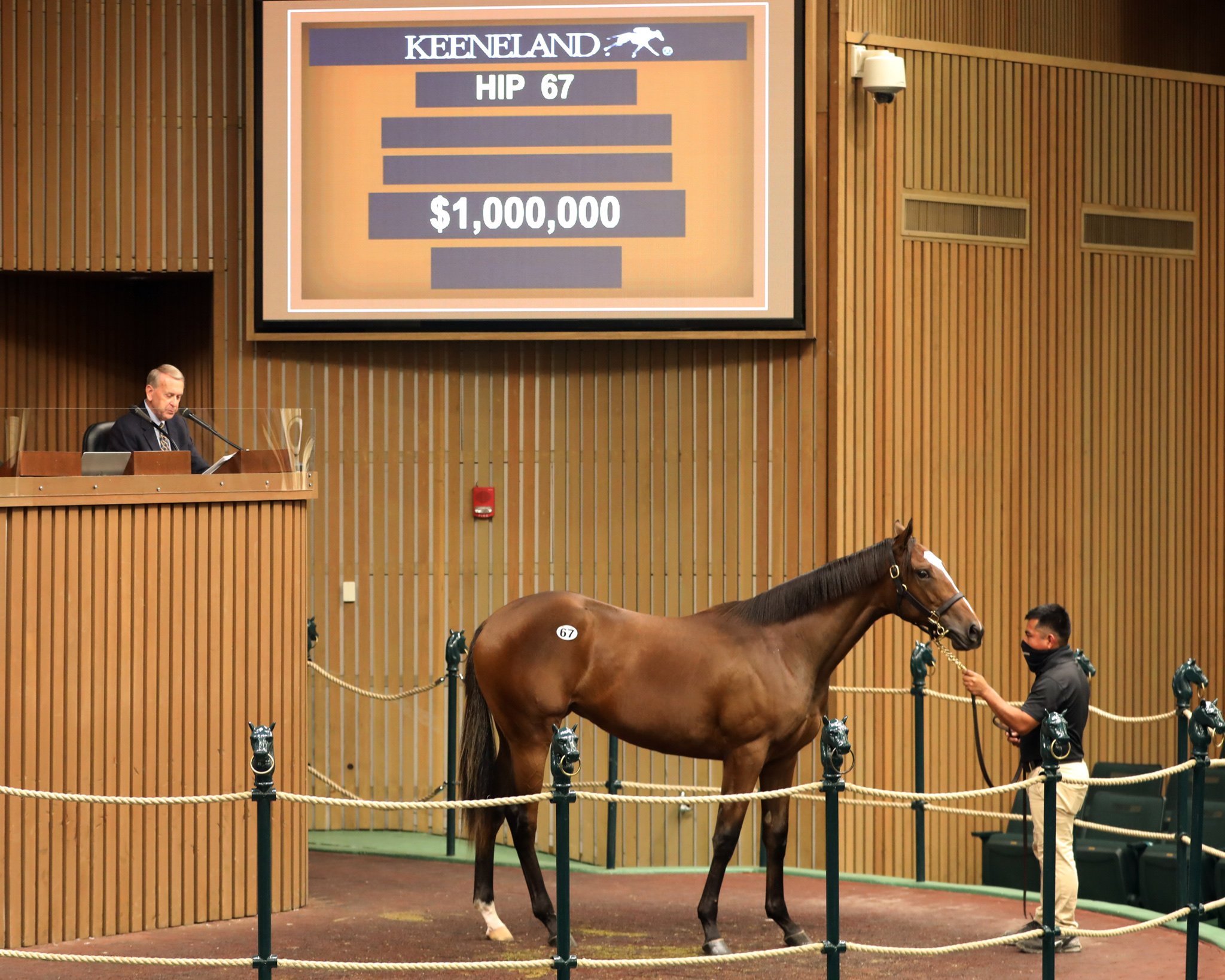 The filly is full sister to European and Irish highweight Air Force Blue. Her dam is the stakes-placed Maria’s Mon mare Chatham. 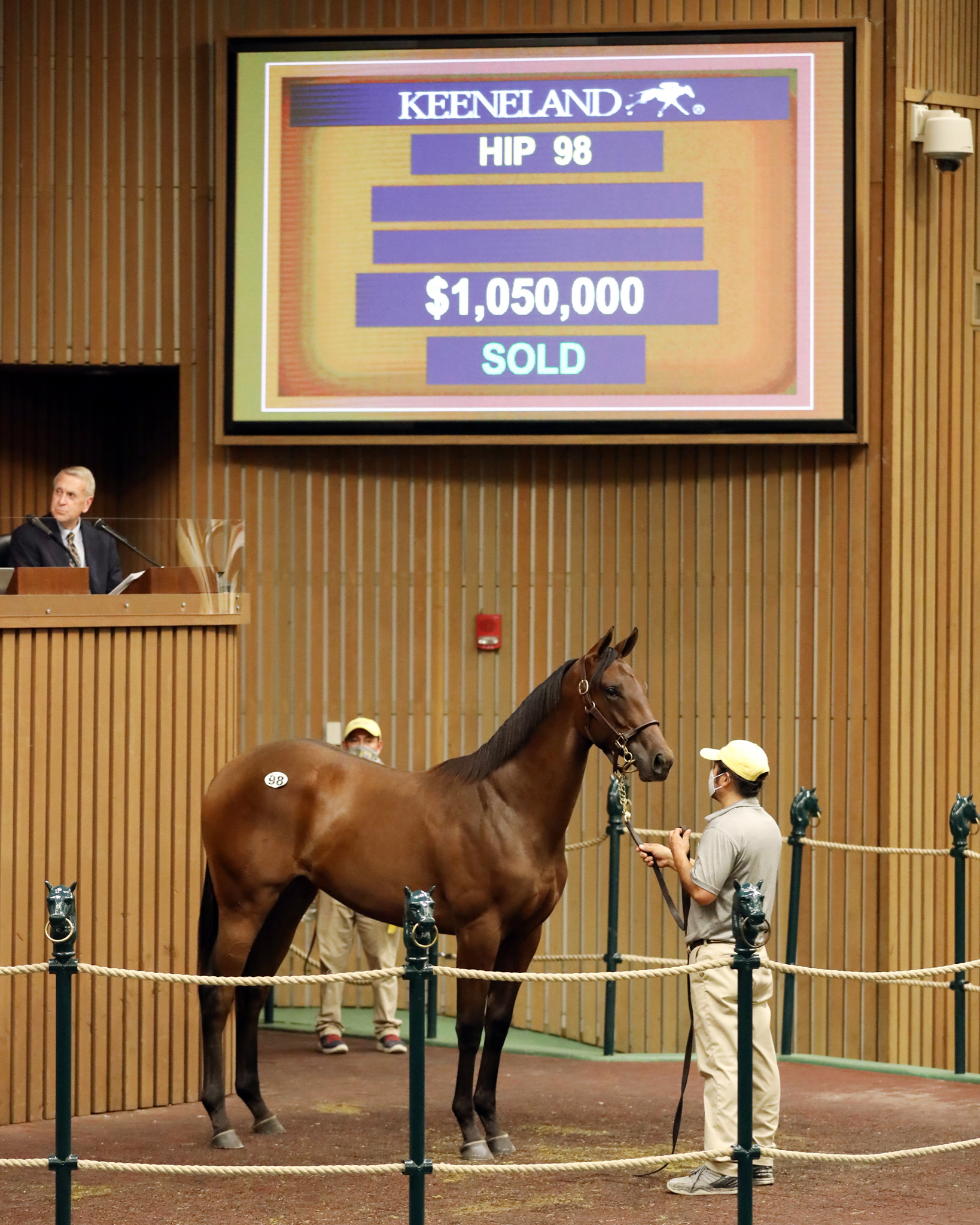 An Into Mischief colt went for $1 million to OXO Equine. Gainesway consigned the colt, who is out of the Grade 2-placed winner Curlina, by Cuvee.

Sunday marked the first of two sessions of the premier Book 1 of the September Sale.

While Keeneland sales officials say they anticipated lower sales this year as a result of the pandemic, they say the safety changes have put a damper on the hype normally generated which they say tends to drive prices up.

“We have our buyers spread out over on the grounds in three different places and we also have them on the internet and the telephone. We like doing the sales pavillion and our back ring where it can create more atmosphere and intense bidding,” said Geoffrey Russell, Director of Sales Operations at Keeneland.

Shannon Arvin, President-elect and interim head of sales at Keeneland added, “That electricity kind of creates the competition. In many ways, it is a competition.”

Russell says they had five sales via internet Sunday, along with 111 bids received from 73 different bidders.

As far as the rest of the sale, the two didn’t put a monetary number on it but said they simply wanted to finish strong and stay optimistic for the upcoming fall meet, Breeder’s Cup and another sale in November.

The September Sale continues through Sunday, Sept. 25, with the second of two Book 1 sessions starting Monday at noon ET.

The entire sale is streamed live at Keeneland.com.

LEXINGTON, KY. (Keeneland) – Claiborne Farm, agent, paid $1.25 million for a filly by
leading sire Tapit out of Grade 1 winner Embellish the Lace to top today’s first session of the Keeneland September Yearling Sale on a day marked by brisk trade and the sale of five horses for $1 million or more.

Keeneland is conducting the September Sale, which continues through Sept. 25, amid COVID-19 protocols designed to create the safest sales environment possible. The sale is offering online and expanded phone bidding to enable buyers to participate remotely.

Keeneland also has increased the number of bidding locations on the sales grounds to enable buyers to maintain proper social distancing. The new location at the Show Barn directly outside the Sales Pavilion proved popular with bidders.

Russell said five horses in the Sunday session sold via online bidding with one yearling purchased by a domestic buyer while the other four horses were sold to international buyers.

“The mechanics of the Internet bidding worked really well,” Arvin said. “We spent a lot of time practicing and preparing for that. It was great that it worked out as well as we expected it would.”

“Just to have a sale met our expectations,” Keeneland Director of Sales Operations Geoffrey Russell said. “We’re very happy it’s September at Keeneland and we’re having a horse sale. To have competitive bidding at all levels of the market was very rewarding. The resiliency of this industry is unbelievable. For what everyone has been through, we appreciate all the buyers who are here and we wish them all success.”

The session-topping Tapit filly, who was consigned by Bluewater Sales, agent, is out of Alabama (G1) winner Embellish the Lace, by Super Saver, and from the family of Grade 1 winners Afleet Express and Materiality.

“This is for a Claiborne client,” Sams said. “He is going to try to buy a couple more fillies and build a broodmare band in the next few years. He wanted a Tapit filly. I saw her for the first time here a few days ago. (My first impression was that she is a) pretty, athletic filly. She is from a young mare from a family that could run. (With Tapit) it is a good cross.”

“You just never know what is going to happen even though she had all of the interest,” Bluewater owner Meg Levy told TVG. “She jumped through all the hoops. I am really, really thrilled that Claiborne’s client ended up getting her. She is such a queen. This filly did everything right the entire time.”

Mandy Pope’s Whisper Hill Farm paid $1.1 million for a daughter of Medaglia d’Oro who is a halfsister to Grade 1 winner and sire Constitution, Group 2 winner Boynton and Group 3 winner Jacaranda. Denali Stud, agent, consigned the filly, who is out of the Grade 3-placed winner Baffled, by Distorted Humor.

“We are not looking for collectable (broodmares); we are looking for a racehorse first,” said Todd Quast, who signed the ticket. “She obviously has great broodmare potential. She checked all the boxes for us. She is very athletic with a super, super shoulder like the Medaglia d’Oros have. We are happy to have her.”

Mike Ryan, agent, paid $1.05 million for a daughter of War Front who is a full sister to European champion and multiple Group 1 winner Air Force Blue. Out of the stakes-placed Maria’s Mon mare Chatham, she was consigned by breeder Stone Farm.

“This is for a client I started to buy a few horses for last year,” Ryan said. “He has been in racing awhile. This filly probably will go to Europe. She will start out there. Being a full sister to champion Air Force Blue, you would have to think she will love the turf. She looks to me like a filly who will run in the states on the dirt. She’s looks more to me like a dirt horse, but we know she will handle the grass. Hopefully she will do some good in Europe and we bring her back here later in her career.”

Ryan said he “thought she was an exceptional physical when I saw her at Stone Farm on (Aug. 28). She is a May foal and is very well grown for her age. Stone Farm raises good horses, and it is nice to buy from people who consistently raise good horses.”

Gainesway, agent, sold two yearlings – a daughter of Quality Road and a colt by Into Mischief – for $1 million each.

The Quality Road filly was purchased by Donato Lanni, agent. Out of the Grade 3-placed
Ghostzapper mare Beloveda, she is from the family of Grade 3 winners Voyagers Quest and Golden Mystery.

Larry Best’s OXO Equine paid $1 million for the son of Into Mischief out of Grade 2-placed winner Curlina, by Cuvee, to make him the session’s high-priced colt. Best, who has a well-known affinity for progeny of Into Mischief, said, “I was looking for a good colt – I seem to collect the fillies.”

Asked about the market on opening day of the September Sale, Best said, “Based on what I’ve heard and seen today, the market’s a little stronger than what I anticipated. There’s a lot of buyers here paying a lot of money for good horses. So that’s a good sign for the industry. I hope it continues.”

The leading consignor was Taylor Made Sales Agency, agent, which sold 22 horses for $7.26 million.

The second session of the September Sale starts Monday at noon ET. The entire sale is streamed live at Keeneland.com.

Unsettled weekend ahead with showers and thunderstorms, but not a washout

You really need to update your iPhone. Here’s how.