Terry Johnson bought a Bluegrass Blowout ticket while working as a contract painter. 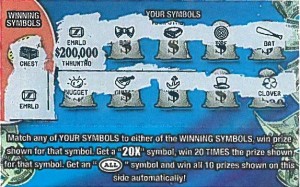 Terry Johnson of St. Albans, WV bought a Bluegrass Blowout ticket at the Minit Mart on Athens Boonesboro Road in Lexington. He told lottery officials he is working in Lexington as a contract painter five days a week, going home on the weekends.

While scratching the ticket off in his truck, Johnson matched the emerald symbol on the back of the double sided ticket. Below the symbol, he scratched off the game’s $200,000 top prize.

“I was in shock,” Johnson said.

Johnson drove to lottery headquarters where, after taxes, he received a check for $142,000.

“I wasn’t sure it was real until I saw you come out with the check,” Johnson said to lottery officials.

“This right here is going to take care of everything,” said Johnson.

For selling the winning ticket, Minit Mart will receive a $2,000 bonus.