LONDON, Ky. (WTVQ/Press Release) – Being raised by a single mother in small-town London, Ky., Gabbi Hartzell had no plans to stay in the charming hamlet where she and her sister were raised. But she said God had different plans for her.

Hartzel was named the winner of Kentucky’s Touchstone Energy Cooperatives’ Who Powers You contest for the work she does through her own non-profit organization and for the creation of “The Well,” a women’s ministry at The Creek Church in London.

The contest was created to reward and support co-op members who are making a difference in the communities served by Kentucky’s Touchstone Energy Cooperatives, energy providers to more than 1.1 million people in 87 counties, including Jackson Energy Cooperative, which serves the London area.

“I was surprised to find out I was even nominated,” Hartzell said with a laugh. The prize comes with a $1,000 check for the winner.

Hartzell’s day job at The Creek Church includes community outreach and social media supervision, but it is her women’s ministry that won her praise in her nomination. “This ministry has brought so much to our community from all ages of women, young and old,” said Angela Wilson, who nominated Hartzell for the award. “This organization has brought women out of hardship and has brought young teens into social groups of acceptance and feeling of love of society as a woman and by Jesus. It congregates the whole community wide range, bringing women together as a community of their own!”

Hartzell said when she lost her best friend to cancer a few years ago, at the young age of 28, she realized people really don’t know how long they have on this Earth. In that very moment, her passion for service was ignited.

“That was when I really went full force into what I felt like God wanted me to do. I had depression, and after that I felt like I needed to do (what God had planned for me) in any way I can,” Hartzell said.

Hartzell’s community outreach job at the church means she’s often looking for ways for the church to give back to the under-privileged in the community. “Angel Tree giving, backpack drives and things like that,” Hartzell said. She also interacts virtually with churchgoers during online services. Her women’s ministry, “The Well,” serves women in the church and does community services.  One service is Prom Prep, which helps provide prom amenities for girls who couldn’t otherwise afford them.

Second-place winner in the Who Powers You contest is Becky Mefford, a member of Owen Electric Cooperative.  Mefford has worked with underprivileged kids at the Owen County Youth Services Center as coordinator for 15 years, and her work is making a difference in the lives of children. 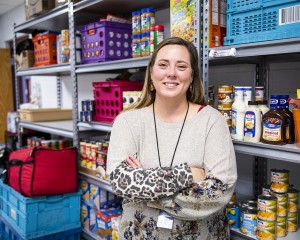 Her shelves on one side of her small office space are lined with food. Clothing items ready to go to students in need of a coat or shoes are scattered here and there. “We’re out of Pop Tarts today, sorry,” she tells a student looking for breakfast. It’s the kind of office where kids stick their heads in the door looking for something they just can’t get from home, and she knows them all by name by the time they hit high school.

Mefford works with Owen County youth from fifth grade through high school seniors, and describes her job as trying to remove barriers to a quality education. “It’s a variety of things. Whatever we can do to help students graduate, be successful, and go on to future careers,” Mefford said.

Third-place winner Tammy Thomas, a Shelby Energy Cooperative member, serves as Senior Vice President and Director of Affordable Housing at Citizens Union Bank in Shelbyville. She is a life-long philanthropist with several interests that all ultimately serve under-privileged children and families. Thomas said it is a spiritual calling for her to give back in any way she can to those in her community who need help. 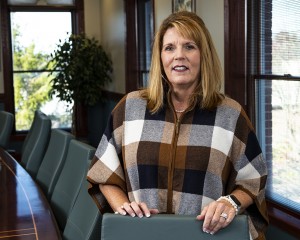 “Each year at Christmas, I would spearhead an effort here at the bank, with help from other bank employees, for people to either donate money or to go shopping for gifts.  We would choose either Salvation Army children or we would partner with the school’s Family Resource and Youth Services Centers and learn about families that needed help with Christmas gifts.  I would collect all the gifts and, with help from other bank employees, we would have a party, take pictures with Santa, and give the children gifts or deliver the gifts,” Thomas said.

Kentucky’s Touchstone Energy Cooperatives plans to host the Who Powers You contest again in 2022.

“Each of this year’s winners plan to donate their winnings back into their community to help their respective causes, signifying their deep connection to local people,“ said Sha Phillips of Kentucky’s Touchstone Energy Cooperatives. “Look for details of the 2022 contest late next summer at www.whopowersyouky.com. It’s one more way co-ops are making life better for the people they serve.”

Kentucky to use $2.5M in grants for flood study

Beshear: Caring is key to connecting with rural voters